After the news broke on April 3 that Liberty Media (NASDAQ:FWONA), a media conglomerate that owns minority interests in several businesses, will divest 90% of its Barnes & Noble (NYSE:BKS) stake, the share price of the book retailer plummeted 13.5%. With its shares now trading at $19.12, investors can buy the company for almost 20% less than what it cost at its 52-week high. The fall continued on April 4, with the shares sliding another 4% in midday trading. Considering this steep price drop and Liberty Media's transaction, should investors consider this a buying opportunity for the business or is it too risky to dive into?

Liberty Media hit Barnes & Noble big-time
Before it decided to sell off the majority of its ownership in the book retailer, Liberty Media owned about 17% of Barnes & Noble. However, the bookstore hasn't been the high-flying page-turner the company hoped it might be. While it is true that from 2010 through 2012 the company grew its revenue 23%, from $5.8 billion to $7.1 billion, its growth engine quickly came to a stop.

You see, during this time frame, the primary driver behind the company's top-line growth was its Nook segment. Over the three-year period, the revenue from Barnes & Noble's Nook operation soared from a modest $105.4 million to $933.5 million. Put another way, this segment accounted for 64% of the business's growth between 2010 and 2012, and it came to make up about 25% of the entire e-book market at its peak.

Since 2012, though, things have become progressively worse for this part of the business. Due to increased competition from the likes of Amazon (NASDAQ:AMZN), the company's Nook revenue fell off a cliff. In 2013, Barnes & Noble's revenue fell 4% to $6.8 billion, driven by the 16% falloff in sales reported by its Nook segment. 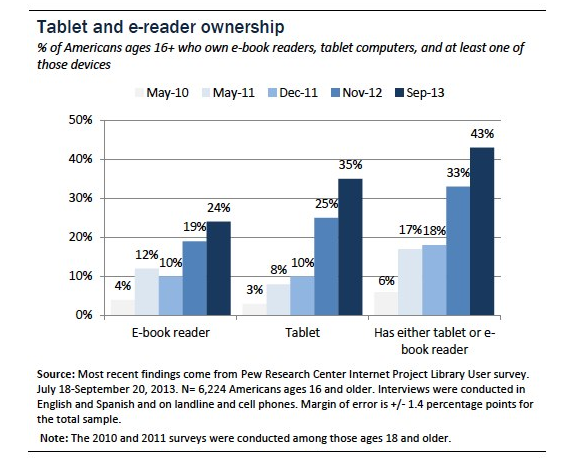 This has been particularly painful for Barnes & Noble, especially at a time when Amazon's e-reader market share greatly exceeds that of Barnes & Noble's Nook. As only 24% of Americans own e-readers and Amazon has more than 50% market share, Amazon has a nice stake in the industry along with plenty of room to grow. This makes now an especially painful time for the Nook to see its slice of the pie decline.

Should investors even worry about this, though?
Based on this data, it looks as if investors should be very concerned about Barnes & Noble's prospects. On top of losing a nice chunk of revenue, the company has lost the trust of a significant shareholder. However, not everything is going badly for the company.

In spite of the poor Nook sales, Barnes & Noble has seen a general incline in revenue over the past few years. Between 2010 and 2013, for instance, the company reported that its revenue (excluding Nook sales) rose 7%, from $5.7 billion to $6.1 billion. Profits have also risen for the company if you take out its results from its Nook segment. Between 2010 and 2013, the company's operating income with the Nook excluded rose 46%, from $199.8 million to $291.8 million.

Foolish takeaway
As we can see, the picture for Barnes & Noble looks bad, and it has gotten worse over the past couple of years. The main driver behind its lackluster performance has been the company's Nook segment, which is starting to look like a wash. Liberty Media probably came to that realization and decided it would be best for its interests as a media conglomerate to divest its Barnes & Noble shares and focus elsewhere instead.

Reading the story this way while taking into consideration Barnes & Noble's acceptable operational performance (excluding the Nook) suggests that the business will probably not succeed in salvaging its Nook but that its core business is all right. Moving forward, it will be interesting to see how the story develops. However, for investors looking for an opportunity to buy into an otherwise-healthy enterprise, Barnes & Noble might make for a decent prospect at current prices.

After a Hard Fall, Is It Game Over for Barnes & Noble? @themotleyfool #stocks $BKS $AMZN $FWONA Next Article
Current