Samsung (NASDAQOTH: SSNLF) has ushered in a new era of social media marketing: the selfie. A strategy that first went viral after Ellen DeGeneres' Oscars moment, the company made headlines again last week when Boston Red Sox star David Ortiz snapped a photo with President Obama. Dubbed the Obama-Ortiz selfie, it has some critics, including my colleague Daniel Kline, up in arms.

A controversial kind of marketing
Ortiz's selfie is controversial for the same reason it's popular: It looked spontaneous. The slugger still maintains it was -- he told The Boston Globe last week that "it had nothing to do with" any sponsorship -- but the fact remains that Samsung hired Ortiz to be its "MLB social media insider" earlier this year, according to SportsBusiness Daily. He made over $4 million in endorsements last year while wearing baseball's most popular jersey, so the terms of his agreement, while undisclosed, probably aren't cheap.

Occurring while the Red Sox were visiting the White House, the moment was marketing gold for Samsung. After Ortiz tweeted the photo, the company retweeted it with the tag line, "Big Papi, Big Selfie." As you might expect, it ruffled some feathers. The president's senior advisor, Dan Pfeiffer, recently told CBS that Obama "didn't know anything" about Samsung's involvement.

The bigger issue
Ultimately, the company's strategy forces its customers, and all social media users, to decide what constitutes proper marketing etiquette. As The Boston Globe's Michael Farrell wrote, the selfie asks, "When is a social media moment also an advertising event?"

In my opinion, the answer is easy. Any time an athlete with a known history of sponsorships interacts with his followers, it should be taken with a grain of salt. It's naive to assume otherwise. Ortiz's own Twitter (NYSE:TWTR) account, for example, is filled with tweets that look like they were written by a PR firm.

One, last month, hypes bat manufacturer Marucci Sports. Ortiz is listed as a partner and a member of the company's Player Advisory Board on its website. Another clearly promotes a local Dunkin' Donuts franchise group,   while a third tells fans to watch "Off the Bat," a TV show from the MLB and MTV2.

David Ortiz on the left of marketing photo. Via @davidortiz, Twitter.

Other promotional tweets, including a partnership with Pedigree, regularly pepper Ortiz's feed.

Until the Federal Trade Commission gets its act together, though, I have a hard time seeing why the slugger's Samsung selfie was worse than any other celebrity endorsement. The government agency issued guidelines on tweets last year but hasn't adequately enforced them.

While broad, the FTC's focus is on ensuring that celebrities disclose which tweets are posted for promotional purposes. As CopyPressed's Amanda Dodge explains, "Now any paid endorsement must include two parts: 1. the statement that it's an advertisement and not an organic tweet, and 2. the acknowledgment that the product might not work exactly as the endorser promises."

The first step is easy enough. It simply asks the tweet to include a term like #ad or #spon (for sponsored). The second is less clear, but generally means, according to Dodge, that "adding words like "typically" or "about" prevents misleading statements." So are celebrities following the guidelines?

Some are, but many aren't. Here are just a couple examples: 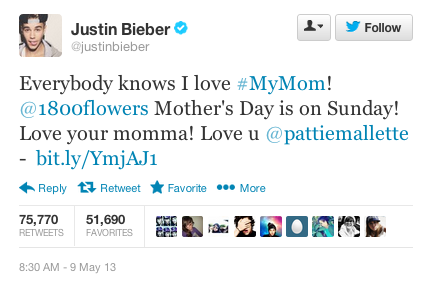 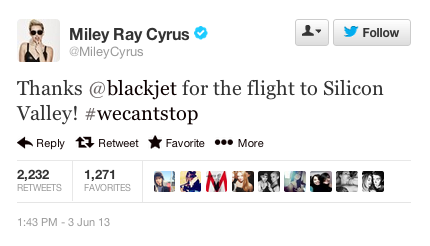 Originally found by Business Insider, Justin Bieber's tweet was rumored to be a potential promo for 1-800-Flowers when it was posted last year. The musician has his own floral collection on the retailer's website. BlackJet, on the other hand, which was the subject of Miley Cyrus's tweet, told the The New York Times that Cyrus "was given some consideration for her [post]."

And the examples don't stop there. According to the Huffington Post, everyone from Jared Leto to Tyrese have been connected with sponsored tweets.

The bottom line
At the end of the day, Samsung's strategy is clearly valuable. As Mr. Kline points out, the combo of Ortiz and Ellen DeGeneres' selfies netted the company close to $70 million in social media exposure.

It's arguable David Ortiz should have disclosed his arrangement with Samsung before snapping his selfie with President Obama, sure. It also would have been best if the tweet was marked with #ad. But does he deserve the media backlash he's been hit with? No, unless the numerous celebrities who came before him are subject to similar criticism, and many aren't.

If we lived in a world where the FTC regularly issued fines for misleading tweets, a case could be made that Ortiz and Samsung deserve punishment. But we don't. And frankly, when a Twitter feed is as PR-friendly as Ortiz's, users should've been skeptical to begin with.