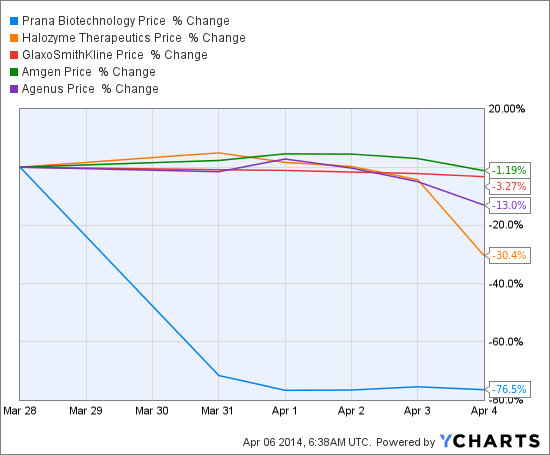 So close
The first big loser comes as a bit of a shock. Two weeks ago, Amgen's talimogene laherparepvec, or T-vec, program was on the list of winners. The modified virus specifically infects tumor cells and replicates itself until they burst. Top-line data from an advanced melanoma trial showed impressive response rates. Two-thirds of tumors injected with the virus shrank by 50% or more. The virus even spread to other tumors and reduced their size.

Last week, Amgen announced the failure of T-vec to produce statistically significant overall survival data. It missed by an incredibly narrow margin. T-vec reached a p-value of 0.051. This means that even though T-vec patients survived longer, there's a 5.1% chance it's just coincidence. If the chance of coincidence been been less than 5%, the trial would be considered a success.

Amgen isn't going to let this setback stop what has been an otherwise successful program, however. The primary endpoint of this late-stage trial was durable response rate, a goal that T-vec clearly accomplished. The result does reduce T-vec's chances of approval as a monotherapy, at least for advanced melanoma.

T-vec still has very good chances of becoming an integral part of a successful combination therapy. It has a date with Merck's star immunotherapy candidate, MK-3475. The trial should begin this fall. Keep your eyes open for the results.

Finally giving up
GlaxoSmithKline has had a string of successes over the past several years, but MAGE-A3 is not one of them. The cancer vaccine failed to extend disease-free survival in separate melanoma and lung cancer trials. Despite the failures, Glaxo refused to quit the lung cancer trial in hopes of finding a subset of patients that responded well. Glaxo spent a couple weeks looking for that subset before finally giving up.

Glaxo emerged from the announcement relatively unscathed. The majority of investor disappointment fell on its partner, Agenus (NASDAQ:AGEN). Glaxo added Agenus' QS-21 Stimulon to boost the immune response to the cancer vaccine. Agenus finished the week down 13%. It's shares have fallen 34% since Glaxo first announced the failure on March 20.

Agenus has heat shock protein vaccines in mid-stage development, and a portfolio of preclinical stage immune oncology candidates, but few resources to develop them.  It's QS-21 Stimulon deal with Glaxo was one of its limited revenue streams, but hardly enough to bring it to positive cash flows. By the end of last year, Agenus had just $3 million in remaining potential payments from Glaxo. If the MAGE-A3 vaccine reaches commercial stages, Agenus is only entitled low single-digit royalties for a period of 7-10 years.

Temporary halt
An independent data monitoring committee recommended Halozyme halt enrollment and dosing of pancreatic cancer patients with its PEGPH20. The committee noticed a possible difference in the rate of thromboembolism, or blood clots and vessel blockages.

PEGPH20 is a longer-lasting version of Halozyme's successful rHuPH20, which is an approved subcutaneous injection that facilitates local absorption of other drugs. PEGPH20 goes beyond the injection site to reach solid tumors, leaving them more susceptible to cancer therapies.

PEGPH20 works by dismantling the hyaluronan component of tumors' protective infrastructure. Thromboembolism is the type of side effect you might expect from a drug that breaks down the extracellular matrix surrounding cancer cells. In theory, an immune response to the damaged tissue could form clots that eventually break loose and obstruct blood vessels.

The halt dragged the company's stock down nearly 30% following the announcement. Shares of Halozyme have fallen more than 50% since reaching record highs in January.

Patients in the PBT2 arm showed a reduction in the plaque presence, but so did the placebo group. With just 15 patients on Placebo and 27 on PBT2, the failure could be explained by rotten luck. There was also a lack of improvement in brain metabolic activity, cognition, and function. As a 12-month trial, these results could be explained by a lack of sufficient time, the small number of patients measured, or -- probably the likeliest explanation -- that the drug just failed. The market assumed the results simply indicate failure and pummeled the stock into a 76% loss for the week.