Once again, the big telecoms are lagging behind their Dow Jones Industrial Average (DJINDICES:^DJI) peers. AT&T (NYSE:T) and Verizon Communications (NYSE:VZ) were the blue-chip index's two worst performers in afternoon trading. Each of these stocks got at least a 1% haircut while the Dow soldiered on to a 0.5% overall gain. And like so many times before, investors are worried about what smaller sector rival T-Mobile (NASDAQ:TMUS) is doing.

This time, T-Mobile launched a $40 "starter plan" for cost-conscious phone buyers. The plan take effect on Saturday with unlimited voice and texting, and includes 500 megabytes of 4G LTE data networking. The company promises not to charge data overage fees, but data access will simply stop when you hit the half-gigabyte threshold.  You're free to buy additional data access at that point -- or just leave it blocked until the next billing cycle starts. There aren't automatic overage fees.

T-Mobile CEO John Legere posted a message to go with the announcement. In it, he gleefully attacked the "arrogant, out-of-touch US wireless industry" and all its faults. In particular, he giggled at the way the "big, fat, old-guard carriers" like to copy T-Mobile's so-called un-carrier moves, but with fleeting time limits or other restrictions on the consumer-friendly reforms.

Verizon's business model is getting outdated, according to Legere.

The direct jabs at Verizon and AT&T are hardly even masked. In fact, Legere stabbed openly at AT&T, noting that its overage charges can add 44% to your monthly bill and noting that AT&T's rapid upgrade program makes you pay twice for a handset.

If the starter plan doesn't seem substantial enough to support more than a 1% discount on both of the telecom giants, Legere also said that it's only the first of "three days of Un-carrier announcements for consumers."

So keep an eye out for more news out of T-Mobile this week. The self-described un-carrier may move the Dow again, without ever having a seat at that exclusive table.

That's how T-Mobile shares jumped 0.2% higher while taking Verizon and AT&T down a notch. On a larger scale, Legere's company has absolutely crushed the big telecoms and the Dow over the last year, as the un-carrier program unfolded.

Will the victory march continue? Hard to say, but at the very least T-Mobile is forcing AT&T and Verizon to take a long, hard look at their business practices. The big winner here is the American consumer, with or without T-Mobile subscriptions. 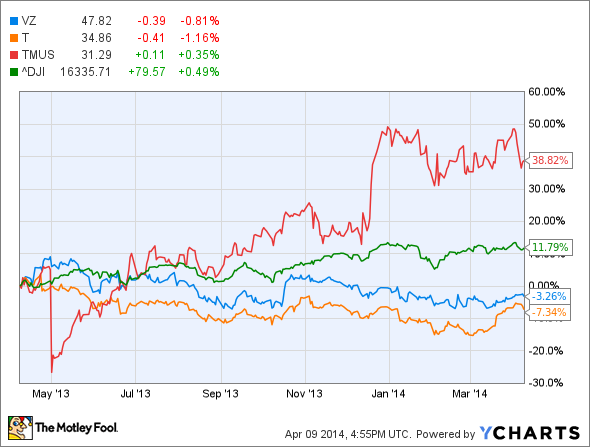 Editor's note: An earlier version of this article said that data access would fall back to a slower standard after hitting the 500-megabyte limit. That's how many other T-Mobile plans work, but not the Simple Starter. The Fool regrets the error.