Lennox Yieke
(Yieke)
Author Bio
Lennox Yieke is a business writer who has a knack for not only seeing first what others see eventually, but telling the story from an entirely fresh, interesting, informed and ‘Foolish’ perspective. Join him as he covers energy, materials and utility stocks, breaking down mind-boggling numbers and loads of jargon into tidbits of understandable, valuable investing guidance. Always feel free to engage with him and share your latest ideas on Twitter @lyieke

In 2012, General Electric's (NYSE:GE) financial arm, GE Capital, represented 45% of the conglomerate's overall earnings. Its contribution to total earnings, however, fell to 40% in 2013. And now, GE CEO Jeff Immelt expects GE Capital's contribution to overall 2014 earnings to come in at 30%, preserving a bigger share of the earnings pie -- 70% to be exact -- for GE's industrial business.

GE's reduced exposure to GE Capital is not a market-driven development, but a deliberate move by the company's management. As I pointed out in a previous article, GE recently filed documents with the SEC relating to the impending IPO of its North America consumer credit card segment, which is part of GE Capital. The new business, up for IPO, will be called Synchrony Financial and will trade under the ticker SYF. Similarly, a recent Reuters report says GE is mulling over a potential $2.75 billion sale of its GE Money Bank unit in the Northern European Nordic Region.

GE's compounded efforts to retreat from the financial sector and refocus on the industrial segment are perfectly timed.

Riding on strong tailwinds
GE is doubling down on its bet on the industrial sector at time when the sector is just about to embark on a new chapter in its growth narrative. According to the World Bank's Global Economic Prospects report released in early January, developing countries and high-income economies appear to be finally turning the corner five years after the global financial crisis. "Global GDP growth is projected to firm from 2.4% in 2013 to 3.2% this year, stabilizing at 3.4 percent and 3.5 percent in 2015 and 2016, respectively, with much of the initial acceleration reflecting stronger growth in high-income economies," reads the report.

This outlook essentially means that any sign of growth going forward is not an intermittent spurt, but actual mobility on the business cycle's recovery phase. 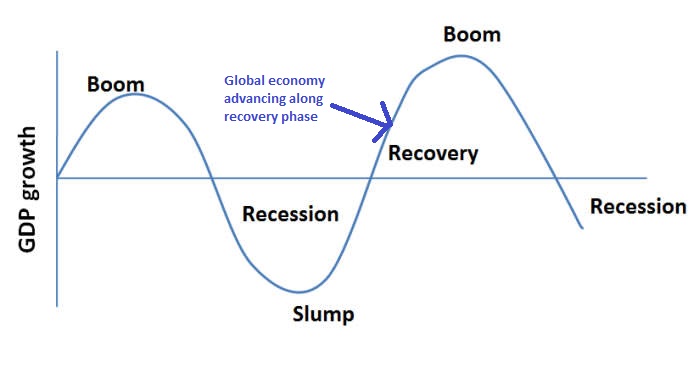 As the global economy moves more freely up the curve, overall economic expansion in the global markets will gain steam. The need to expand and overhaul infrastructure, buy capital goods, and expand business will drive demand for industrial goods through the roof, placing a reasonable floor under the prices of industrial products. This will generate strong tailwinds for bigwigs such as General Electric, which controls a huge share of the market.

GE set up a GE Ventures shop in Silicon Valley that will focus on how to link the Internet to industrial products, leveraging the Internet of Things trend. GE Ventures will also allow GE to monitor the overall industrial business landscape and anticipate new technologies, enabling it to pair these technologies with old routines and effectively disrupt the broader manufacturing landscape.

The conglomerate also aims to reduce its new product introduction cycle by 30% over the next couple of years. By leveraging technology and introducing new products ahead of the broader market, GE will be able to effectively capitalize on the impending expansion in the global industrial sector in the long run.

Foolish takeaway
GE's renewed focus on the industrial segment will allow it to greatly widen its revenue streams on strong industry tailwinds. Look at its exposure to the booming U.S. oil and gas sector for perspective. By 2015, the U.S. will surpass Saudi Arabia as the world's greatest oil producer, according to the International Energy Agency (IEA). Even without diving into the finer details, this implicitly means that GE, which is exposed to nearly all parts of the natural gas production and transportation value chain, will gain immensely.

GE's decision to increase its focus on the industrial sector is not only perfectly timed, but it has the necessary underlying elements that guarantee perfect execution -- a slant toward technology and exposure to thriving sectors such as oil and gas. There could be great upside ahead for this stock.