JPMorgan Chase (NYSE:JPM) is leading the Dow Jones Industrial Average (DJINDICES:^DJI) lower as the nation's largest bank's disappointing earnings bode ill for the financial sector as a whole. As of 1:25 p.m. EDT the Dow is down 117 points to 16,053. The S&P 500 (SNPINDEX:^GSPC) is down 10 points 1,823.

JPMorgan Chase is down 3.1% after reporting that first-quarter income dropped 20% year over year to $5.3 billion, or $1.28 per share, missing analyst expectations of $1.40 per share.

Revenue was down 8% year over year from $25.8 billion to $23.8 billion, well below analyst expectations of $24.5 billion. With interest rates far higher this quarter than where they were last year, mortgage originations fell 68% year over year to $17 billion as fewer people bought houses or refinanced their mortgages. 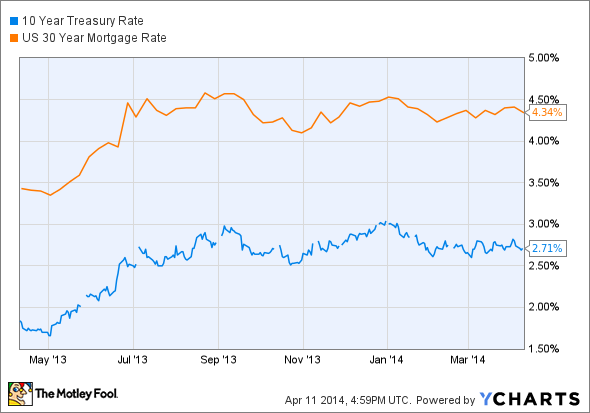 Also contributing to the 8% drop in overall revenue was a drop in bond trading revenue, down 21% year over year to $3.8 billion, and consumer banking revenue, which fell 25% from the prior-year quarter.

As the U.S.' largest bank, JPMorgan is a bellwether for the rest of the financial sector. Thanks in part to the company's poor earnings, the rest of the Dow's financial stocks are dropping today. Visa and Goldman Sachs are also among the Dow's worst performers today, and because of their relatively high stock prices, they're having an outsize impact on the index. Goldman's drop can be attributed to JPMorgan's weaker-than-expected results, as Goldman is heavily dependent on its fixed-income and commodities group. While Goldman is largely seen as a more skilled trader than JPMorgan, Goldman faces the same market dynamics as JPMorgan, so its fixed-income unit likely did not do much better than JPMorgan's.