Please ensure Javascript is enabled for purposes of website accessibility
Free Article Join Over 1 Million Premium Members And Get More In-Depth Stock Guidance and Research
By Daniel James - Apr 12, 2014 at 10:00AM

Fast-food companies such as Taco Bell and Burger King are looking to eat away at McDonald's' dominance in the breakfast business.

The major US fast-food chains are locked in a battle for your breakfast business. The most important meal of the day is a lucrative business for these companies. Unlike most daily meals in the fast-food segment, breakfast sales are still growing, having risen by an average of 4.8% per year between 2007 and 2012.

Moreover, fast-food breakfast sales totaled around $31.7 billion in 2012, making it a very large market indeed. So, it's no great surprise that fast-food chains are racking their brains to gain a larger slice of this breakfast pie. What are McDonald's ( MCD 1.44% ), Taco Bell of Yum! Brands ( YUM 1.70% ), and Burger King Worldwide ( BKW.DL ) doing to spur breakfast sales?

The reigning champion: McDonald's
Currently, fast-food giant McDonald's holds the biggest market share in the red-hot breakfast market, accounting for nearly a third of fast-food breakfasts in 2012. This meal has for a long time been a core focus of McDonald's' management, the CEO stating on the fourth-quarter conference call that the company has a competitive advantage in this space -- one that would be further solidified by a focus on coffee. 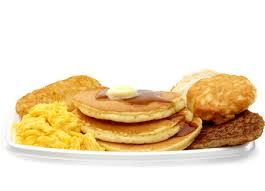 In response to increased competition from rivals, McDonald's started dishing out free coffee between March 31 and April 13. With breakfast sales accounting for some 20% of the company's total sales, it is crucial to keep traffic going; and presumably the company hopes to instill more customers with the habit of grabbing coffee at McDonald's on the way to work. The announcement came on the back of some rather poor US sales results for February, down 1.4% overall.

The contenders: Taco Bell and Burger King
One of the main reasons for McDonald's stepping up its breakfast promotions is increasing competition in the space, most notably from Taco Bell. The Mexican fast-food company recently released its new breakfast menu, which was reportedly seven years in the making.

To increase visibility for its new campaign, Taco Bell showed it wasn't afraid of poking fun at its larger rival, airing several commercials in which people named Ronald McDonald endorsed the new menu. McDonald's fired back with a social media campaign of its own on Facebook, stating that "imitation is the sincerest form of flattery."

Meanwhile, Burger King hasn't been sitting still either, as hungry for your breakfast business as the other fast-food chains. With breakfast wraps and sandwiches already on the menu, the company is now testing a Chicken and Waffle Sandwich for breakfast customers.

After offering free coffee to customers in January, Burger King is now offering breakfast value menus with some deals starting at only $1. However, it may be useful to note that the items are only on sale for a limited time. Cheap food is indeed an easy way to lure hungry consumers and should probably increase store traffic to some degree.

Despite these initiatives, it may prove problematic for these contenders to lure customers away from McDonald's for their morning coffee and shot of eggs and bacon. Eating habits, especially morning eating habits, are deeply ingrained with many consumers, grabbing a coffee from McDonald's on the way to work probably almost an automatic action for many commuters. As such, it remains to be seen whether Taco Bell and Burger King will be able to capture meaningful market share from the reigning breakfast champion.

The bottom line
The interest among fast-food chains for the breakfast segment is easily explained. It's a huge business and moreover is one of the only fast-food segments showing solid growth. As such, several chains have come up with initiatives to dislodge the currently reigning breakfast boss, McDonald's. Taco Bell has recently come out with its new breakfast menu, accompanied by a number of commercial videos poking fun at its larger rival.

Meanwhile, Burger King has chosen the path of least resistance, offering cheap food and coffee. However, it will prove difficult to poach market share from McDonald's, as morning eating habits on the way to work are often deeply ingrained.