Warren Buffett's stock-picking is usually what makes the headlines, but another business at Berkshire Hathaway (NYSE:BRK-A)(NYSE:BRK-B) that launched a year ago could deliver big results in the future.

In 2013, Berkshire Hathaway reported nearly 30% of its $19.5 billion in earnings available to shareholders came from its insurance lines. Yet in April of last year, insurance mastermind at Berkshire Hathaway, Ajit Jain, launched a new insurance business that is already gaining ground against competitors and has drawn high praise from Buffett himself.

The new step forward
In April of last year, Berkshire Hathaway launched the Berkshire Hathaway Specialty Insurance ("BHSI") which principally operates in the excess and surplus line of insurance "with the goal of providing customers with tailored solutions for large and complex risks ranging from natural catastrophes, to securities litigation, to construction liabilities."

And although it is a small part of the broader insurance market, consultancy PricewaterhouseCoopers noted in a 2012 report: "Previously seen as the 'wild, wild west' of insurance, the excess and surplus market has become a more and more attractive means for property and casualty carriers to bolster the bottom line," as a result of less regulation and their unique products.

Strong results delivered
All too often, companies will approach new businesses with the grandest ambitions but ultimately the results won't match the lofty goals, however that has not been the case for Berkshire Hathaway. SNL, a provider of market data, reported Berkshire Hathaway grew its excess and surplus premiums in 2013 by 40% moving from $404 million to $560 million. 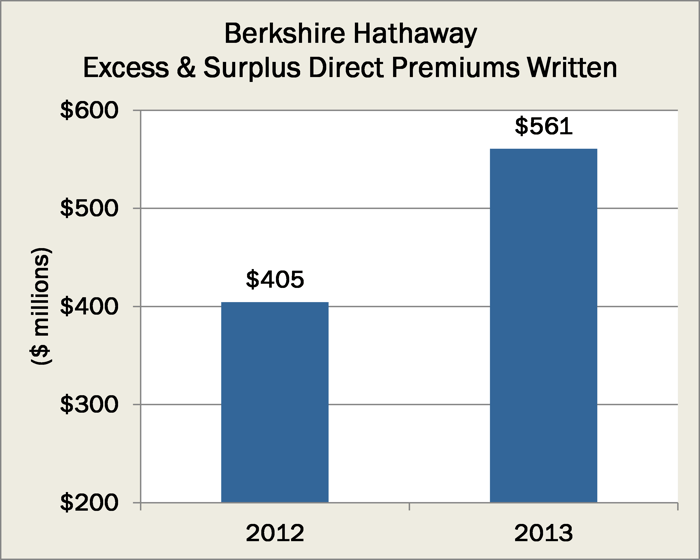 This far outpaced the industry as whole, which only saw its premiums written rise by 7.6%. AIG, which is far and away the market leader with $4.8 billion in premiums and about 17.5% of the market, actually saw its premiums fall by more than $200 million over where they stood in 2012.

In fact, this strong performance in 2013 was applauded by Buffett in the most recent letter to shareholders, as he said:

"BHSI is led by Peter Eastwood, an experienced underwriter who is widely respected in the insurance world. Peter has assembled a spectacular team that is already writing a substantial amount of business with many Fortune 500 companies and with smaller operations as well. BHSI will be a major asset for Berkshire, one that will generate volume in the billions within a few years."

Encouraging endorsement
The endorsement from Buffett is not one that should be taken lightly, as he is not one to praise individuals or businesses simply for the sake of friendly formalities. His assertion that the volume could be "in the billions" is evidence he thinks the impressive growth seen in 2013 will continue for years to come.

Insurance is often viewed as a stable industry with little room for growth, so to see BHSI has delivered impressive growth already, and to hear that Buffett believes the best is ahead of it is an encouraging reality.