The decline of the personal computer market appears to have stabilized. However, the seeming near-rebound in the first quarter of 2014 may have resulted from factors other than consumers showing a renewed interest in the category.

Gartner reported a 1.7% decline in global PC shipments in the first quarter of 2014. This would seem like a bad number in most industries, but for computer makers it's the smallest decline that the PC industry has suffered since early 2012.

That number, however, may not reflect a rebound in demand for traditional desktops and laptops. Rather, it may reflect a one-time increase in sales due to Microsoft (NASDAQ:MSFT) dropping support for Windows XP. That operating system accounts for nearly 30% of all PCs in use and any XP diehards who are worried about being hit by viruses pretty much have to upgrade.

According to Gartner, the end of Windows XP support in early April has boosted replacement buys and it could continue to do so in the current quarter. "While it's unlikely that PC sales will suddenly start growing again, the trend of the past few quarters suggests that the industry may finally have bottomed out and sales might stabilize around the current level," Statista.com reported. 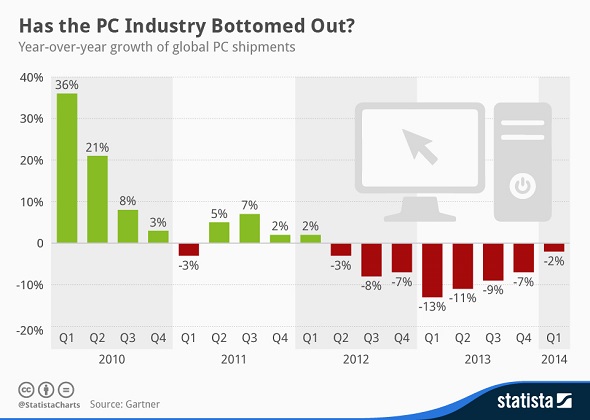 Is this a dead cat bounce?
Just because PC sales bounced back a little bit does not change the underlying reasons they declined in the first place.

"We see declines slowing and eventually stabilizing, but up ahead we don't have a lot of cause for very robust growth," said Jay Chou, an analyst at IDC, another research group that tracks sales.

PC sales have dropped because consumers now have lots of other options for their computing needs. Tablets have replaced the need for full-on computers in many cases and some customers are even using their smartphones for things that once required computers. Add in emerging categories like Google's (NASDAQ: GOOG) Chromebooks and a slowing decline and eventual stability may be all that PC makers can hope for.

PCs are still big business
While the PC market is not the explosive growth engine it once was and nothing short of a time machine can change that, buyers still purchase many PCs each year.

Roughly 350 million personal computers are sold each year, the Wall Street Journal reported in April 2013. However, the combined sales of smartphones and tablets have dwarfed the figures for PCs.

"People are expected to buy about 919 million smartphones this year, and IDC expects nearly 200 million tablets will be sold this year," the paper reported.

Smartphones and tablets may make up a bigger business, but the major PC manufacturers can still make money by winning market share from each other and stomping out smaller players. 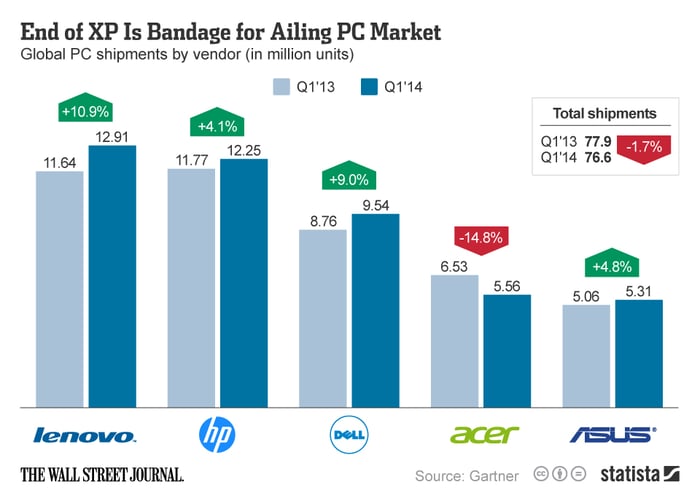 As you can see from the chart above only one of the five largest PC players showed a decline in unit shipments with Acer losing about a million units in sales and total shipments for the industry dropping by 1.3 million units. That means that the roughly 2.75 million units gained by the other four major players -- Lenovo (OTC:LNVGY), HP (NYSE:HPQ), Dell (NASDAQ:DELL.DL), and Asus (NASDAQOTH: AKCPF) -- came at the expense of companies outside the top five.

There may not be growth in the category but individual brands have room to grow. However, the intense competition and shrinking/stabilizing market makes it hard to see how that growth could result in more profitability. Aside from some niche industries like health care and high-end gaming that require more expensive machines, tablets are a huge drag on PC prices -- if PC prices rise too high buyers can more easily justify the lower functionality of alternative devices.

What exactly is a PC?
Microsoft -- which makes the Windows operating system that powers nearly all PCs sold by the companies above -- has blurred the line between conventional PCs and tablets by making its Windows 8 compatible with both. That has resulted in a number of hybrid products like the Microsoft Surface that do not fit comfortably into either category. As Windows 8 adoption increases, the line for what constitutes a PC will remain a bit hazy. Is a tablet with a keyboard attached that runs Windows 8 to power programs like Microsoft Office still a tablet? What about an Apple iPad hooked up to a monitor with a wireless keyboard that the operator uses for video editing?

"Intel (NASDAQ: INTC) and Microsoft have made keen efforts to revive the position of PCs against tablets, particularly in light of the latter adapting its operating system to a touch-screen interface," said IDC's Fouad Rafiq Charakla. "At the same time, the growing availability of aggressively priced tablet models, including those offered by multinational vendors, is continuing to encourage growing numbers of end users to switch to this increasingly popular form factor."

The best strategy for Microsoft and its PC-making partners may very well be co-opting the tablet segment and making the line between PCs, laptops, and tablets even blurrier. PCs sales may fall but if a manufacturer loses PC sales and gains tablet sales the end result could be a wash (or even a gain).

In some ways the designation PC no longer means anything as every company on the chart above makes a Windows-powered device with a tablet form factor that can be enhanced to offer PC-like functionality.

If Microsoft can get consumers to accept Windows 8 as a viable "tablet" operating system (and those numbers have been slowly growing), then the number of PCs shipped every quarter will become an irrelevant number -- it would be like lamenting the decline in sales of flip phones.

That of course is a huge mountain to climb for Microsoft as Android and Apple's iOS dominate the tablet market. However, if tablets replace PCs it's reasonable to think that people will want them to do PC-like things and Microsoft's OS may be best suited for that.