Over the past 12 months, Pfizer (NYSE:PFE) has underperformed the S&P 500 by a wide margin. The company is just 4.6% ahead of the benchmark over the past five years. Following the recent industry-wide sell-off, it crossed into what looks like deep value territory. Is this an opportunity, or a trap?

Progression-free survival was the trial's primary endpoint, and palbociclib hit it out of the park. The therapy received a breakthrough designation for treatment of advanced or metastatic estrogen receptor-positive breast cancer. If approved, Pfizer already has plans for a label expansion in motion. Two ongoing Phase 3 trials might pave the way for an expansion into treatment of additional groups of breast cancer patients.

Single digit
With a recent P/E ratio of just 9.9, it looks as if the market doubts Pfizer's ability to convert clinical successes into bottom line growth. Industry peer Merck (NYSE:MRK) fell slightly during the recent sell-off, but it's been trading at a whopping P/E ratio of 39.0. 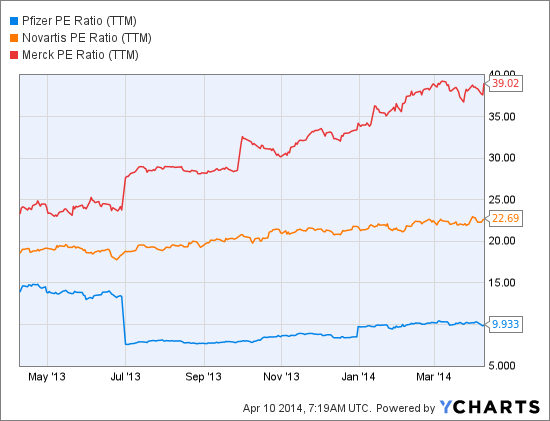 Much of the excitement surrounding Merck centers on its investigational anti-PD-1 immunotherapy, MK-3475. Some cancer cells inhibit the immune system by presenting PD-L1 on their surface to PD-1 receptors on T-cells sent to destroy them. MK-3475 prevents this process, so it should be effective in patients with PD-L1-positive tumors.

Merck Research Laboratory President Roger Perlmutter recently spoke to the American Association for Cancer Research about tumor expression of PD-L1 and clinical outcomes with MK-3475 as a monotherapy. As you might expect, patients with PD-L1-positive tumors showed stronger responses than those that were PD-L1 negative. Surprisingly, some patients with PD-L1-negative tumors also showed a durable response. It's too early to judge the significance of the findings, but they suggest the therapy may eventually become a treatment option for a wider range of patients.

Although Pfizer doesn't have an anti-PD-1 program of its own, it has an opportunity to share in the potential success of Merck's. The two companies have entered a collaboration agreement to test MK-3475 in combination with Pfizer's Inlyta and an investigational antibody similar to MK-3475 that acts on a different signalling pathway. Financial details have not been disclosed, so it's difficult to know how much benefit Pfizer could garner.

Steady beat
Unlike Pfizer and Merck, Novartis (NYSE:NVS) hasn't suffered declining revenue over the past couple years. That stability hasn't been rewarded with a valuation anywhere near Merck's. With a recent P/E ratio of 22.69, it's still far above Pfizer's. 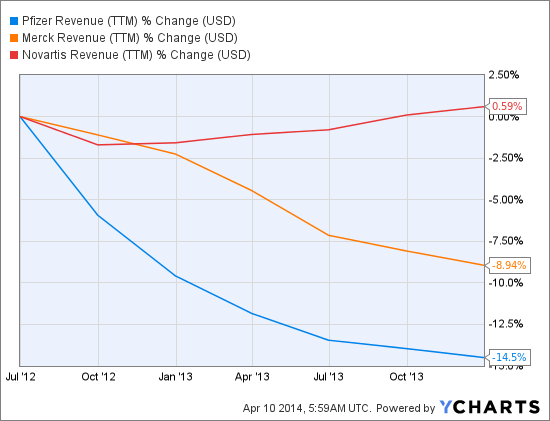 A recent surprise that could boost Novartis' profits in years ahead has been largely ignored by the market. Last last month, the independent data monitoring committee recommended an early stop for a late-stage chronic heart failure trial. The company's first-in-class LCZ696 pill significantly delayed the first occurrence of either cardiovascular death or heart failure hospitalization.

Detailed results haven't been released, but reaching the goal early is a great sign that the drug is far more effective than the control arm. The control in this case was the standard ACE inhibitor used to treat chronic heart failure, enalapril. This could mean that Novartis has the first significant improvement for the treatment of chronic heart failure in years. Novartis estimates a market of over 20 million heart failure patients in the U.S. and EU. As populations age, that number should continue growing.

A look forward
The loss of exclusivity on several important drugs took its toll on Pfizer, but the worst is over. If approved, palbociclib could go a long way toward replacing those recent losses. Pfizer might not have the enormous potential of LCZ696 or MK-3475, but a P/E ratio of 9.9 is hard to pass up in this industry. Pfizer may represent one of the best value opportunities in the pharmaceutical industry.