Las Vegas Sands (NYSE:LVS) is one of the major beneficiaries from booming gambling demand in Macau, and the company is planning to consolidate its leadership over competitors such as Wynn Resorts (NASDAQ:WYNN) and Melco Crown (NASDAQ:MLCO) in the years ahead. This growing casino operator looks like the right bet for your money.

A leading player in a growing market
Las Vegas Sands also has operations in the U.S. and Singapore, but the company generates most of its growth from Macau. This is the only area in China where gambling is legalized, and Sands is one of only six companies in the world with a license to operate in the region.

Not only that, but the company is an undisputed leader in Macau. Management estimates that Sands' market share in terms of hotel room inventory is bigger than the share of the following five gaming operators combined. 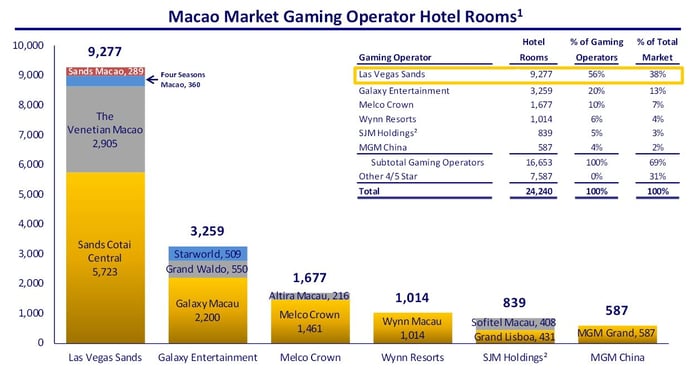 Las Vegas Sands plans to continue investing heavily on expansion in Macau over the coming years. The Parisian Macau is expected to be inaugurated in late 2015; this project will be Las Vegas Sands' fifth property on the Cotai Strip and sixth in Macau overall, adding 3,000 rooms to its capacity in the region.

The company intends to have more than 12,600 hotel rooms and apartments in Macau by 2017, giving it a leading market share of 44% rooms among gaming operators by that year. 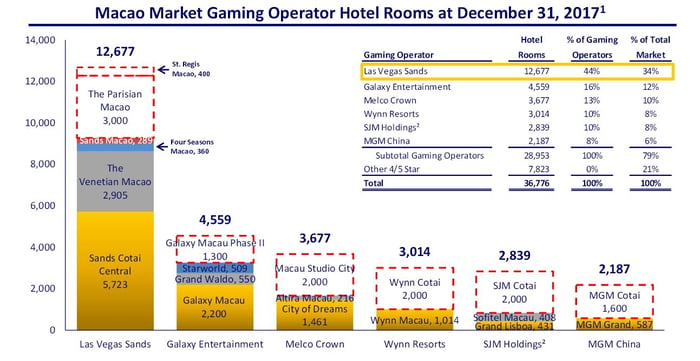 Sands is also exploring opportunities for growth in markets such as Japan, South Korea, and Vietnam. Considering its financial resources and reputation as a solid operator in Asia, the company is in a good position to compete for projects in countries around the world.

Financial performance
Las Vegas Sands has delivered remarkable growth for investors in recent years, with sales increasing at an average annual rate of 25.7% in the last half-decade and earnings per share growing at an impressive 50.9% per year over the same period. Even if growth should naturally slow as the company becomes bigger and more mature over time, Las Vegas Sands has continued to fire on all cylinders as of the last quarter.

Revenue during the fourth quarter of 2013 increased by 18.8% to $3.66 billion, while EPS jumped by 32.8% from the same quarter of the prior year. As impressive as these numbers are, results came in below analysts' expectations, mostly because of weakness in Singapore.

Revenue in that market fell by 8% during the last quarter, to below $660 million. The company plans to increase marketing and advertising in order to attract visitors from neighboring countries; however, it's not clear yet if Sands can improve performance in Singapore in the medium term.

The company is bigger than Wynn Resorts and Melco Crown in Macau, which could mean slower growth versus its smaller peers. But Las Vegas Sands is second to none when it comes to financial performance in its main market.

Attractive valuation
While Melco Crown is the growth leader among the group, Las Vegas Sands has materially outgrown Wynn Resorts on a total revenue basis in recent years. However, the stock is priced at a discount to both Melco Crown and Wynn Resorts.

Las Vegas Sands is moderately valued, if not a bit undervalued, when compared to Wynn, Melco Crown, and other casinos with big presences in Macau.

Foolish takeaway
Las Vegas Sands is a leading player in the much-promising growth market of Macau, and the company has ambitious expansionary plans in China and other Asian markets. Its financial performance is remarkably strong despite weakness in Singapore, and the stock is attractively valued relative to peers such as Melco Crown and Wynn Resorts.

Las Vegas Sands looks like a smart bet for investors looking to profit from outstanding growth opportunities in the years ahead.