When Grand Prairie, Texas-based Six Flags Entertainment (NYSE:SIX) attempted to expand into the Middle East in 2008, the market turned sour and Six Flags was forced to abandon its ambitious plans. Fast forward to today. After undergoing bankruptcy, Six Flags has made a big comeback.  Six years after initiating the first attempt at expansion (how ironic), the company just announced a new partnership with Meraas Leisure and Entertainment to open a new Six Flags amusement park in Dubai, United Arab Emirates. This move will be quite beneficial for Six Flags and indicates six good reasons to consider investing in the company.

Reason #1: Dubai residents have plenty of disposable income
Dubai is not a small, dusty, Middle Eastern desert oasis. Dubai is the largest city in the United Arab Emirates and has a vibrantly growing economy. Nancy Krejsa, the senior Vice President of investor relations and corporate communications at Six Flags, realizes the importance of Dubai in the world economy: "Dubai is a vibrant and growing market, where there is high amounts of disposable income, as well as tourism and high-demand for entertainment. It was an ideal location."

Reason #2: Six Flags offers a unique theme park experience for Dubai residents
Currently, Dubai is home to several theme parks, including the world's largest indoor theme park. This may be seen as a challenge for Six Flags as more competition generally means a harder time earning scarcer dollars (or, in this case, dirhams.) However, many of the theme parks in Dubai are water parks. This makes sense, as Dubai can be quite the toasty locale during the summer. What this means for Six Flags is that the company doesn't have as much competition as one may initially think. Six Flags will offer a new, exciting experience for Dubai residents willing to unload a few dirhams to try out snazzy roller coasters for the day.

Reason #3: Six Flags has strong revenue
Currently, Six Flags owns and operates 18 locations in the United States, Mexico, and Canada. Six Flags reported meaty revenues of $1.1 billion annually in 2013, slightly up from 2012's numbers. The firm is quite comparable to another strong contender in the amusement park industry, Cedar Fair (NYSE:FUN). Cedar Fair logged almost the same amount of revenue as Six Flags in 2013, and has 17 locations. Despite concerns over a shrinking middle class, Six Flags and Cedar Fair have both continued to perform well.

Reason #4: Six Flags doesn't have bad press right now
Six Flags has generally been a company with high customer satisfaction ratings,despite a tragic roller coaster death in the summer of 2013. Having public opinion and a smart management team on your side is crucial in the finicky world of amusement parks, as excellently demonstrated by the struggles of SeaWorld (NYSE:SEAS). SeaWorld has been embroiled in controversies over trainer deaths and a documentary called "Blackfish" that details supposed abuses of animals by the company. SeaWorld's stock has not been faring too well since its Initial Public Offering (IPO), declining about 10%, while Six Flags and Cedar Fair have enjoyed modest stock price gains during the same time frame: 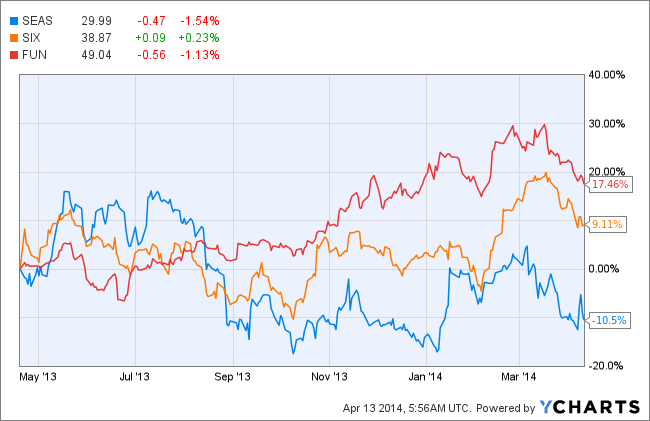 Not only is Six Flags enjoying a good public image right now as opposed to SeaWorld, it is also a superior investment in another important way. 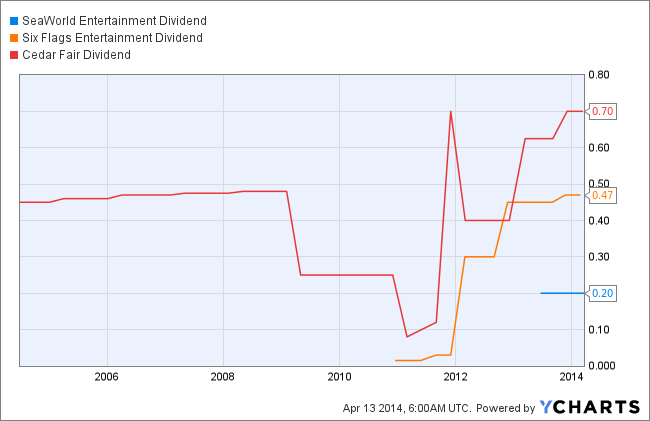 The key point to note from the long-term overview chart is that while Cedar Fair has been paying out dividends longer than both Six Flags and SeaWorld, Six Flags has consistently been increasing its dividend and has not cut its payout like Cedar Fair did three times during the time period in question. Cedar Fair and Six Flags also have more established consistency with their payments, while SeaWorld just started paying a dividend and may have to cut it if the company's poor PR starts impacting the bottom line too much.

Reason #6: Six Flags has managed expenses well
Despite increasing food costs, Six Flags has actually decreased its expenses and improved operating efficiency in 2013, which is another key area for amusement parks. In order to stay competitive and boost earnings, increasing efficiency is vital for success in the American economy. In 2013, Six Flags' operating expenses as a part of revenue decreased by 90 basis points, another encouraging sign for the corporation.

Overall, both Six Flags and Cedar Fair remain excellent performers in the amusement park industry. Until SeaWorld weathers the storm of controversy surrounding it and can demonstrate consistent financial strength, I'd stick to the sidelines regarding its stock for now. For those investors who wish to have a flash of bedazzling fun in their portfolio, they should consider purchasing shares of Six Flags and Cedar Fair.