Investors are really worried about how the slowing offshore drilling market will impact contract drillers. However, data from Bloomberg shows one really good sign for the industry, and especially for investors in Seadrill (NYSE:SDRL). Let's take a closer look.

Drilling down into recent dayrates

In addition to that ENSCO (NYSE:VAL) was awarded a contract for its newbuild drillship ENSCO DS-9. The rig received a healthy day rate of $550,000 for 1,096 days. While ENSCO's newbuild didn't receive the highest day rate awarded among the five, it was the longest contract signed in the quarter.

Why this matters for Seadrill
For a company like Seadrill, these two data points are important. This is because Seadrill has one of the largest and youngest ultra-deepwater fleets in the industry as the following slide shows. 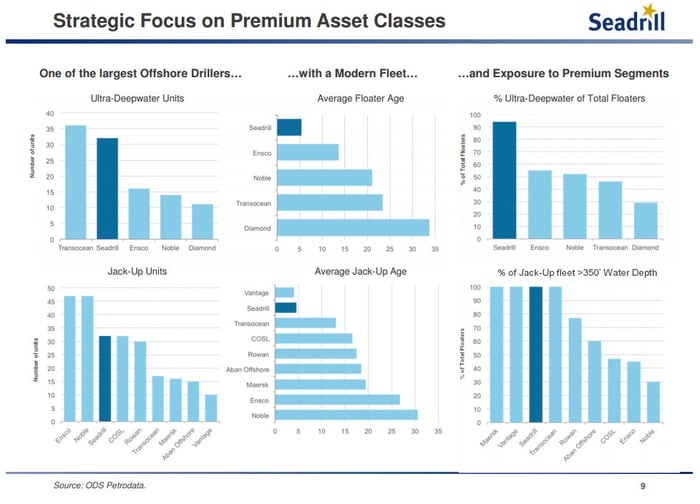 The concern that investors have is that despite a $15.4 billion backlog within its floater fleet Seadrill still doesn't have contracts for all its newbuild drillships. With exploration and projection companies cutting back on drilling capital it is causing a slowdown in new contracts being signed. That's causing investors to worry that Seadrill won't be able to secure favorable rates on contracts as more newbuild ships arrive. This is a legitimate concern as this next slide shows the company does have a noticeable number of newbuilds currently without a contract. 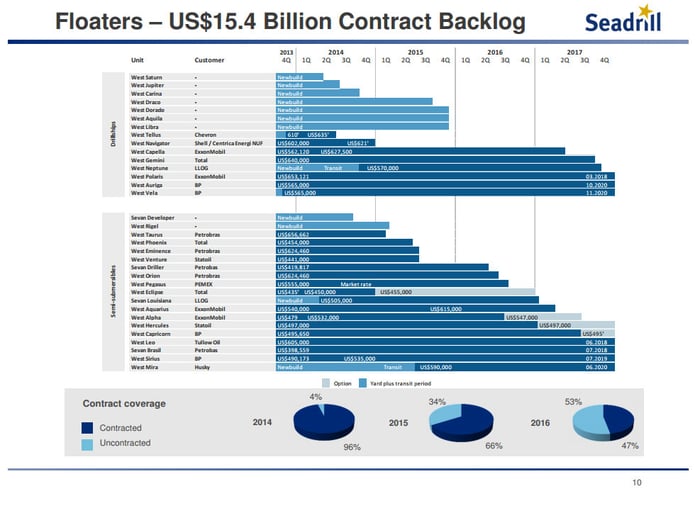 The concern isn't so much this year as 96% of its fleet is currently under contract. The worry is that as the slowdown in the offshore market continues, Seadrill will struggle to secure contracts for the 34% of available capacity in 2015 as well as the 53% of 2016 capacity. This uncontracted capacity could cause Seadrill problems in funding its massive dividend.

That being said, the recent contract data is a positive sign for Seadrill as not only did ENSCO  secure a long-dated contract for its ultra-deepwater newbuilt, but the overall trend in ultra-deepwater dayrates is higher for renewal rates. This data gives investors reason to hope that Seadrill might not have a big a problem getting its rigs under similarly long-term, profitable contracts as some investors fear.

Investor takeaway
Overall, Seadrill is very well positioned because it's highly concentrated in the ultra-deepwater drilling segment. With such a new fleet Seadrill should be able to get long-term contracts for its rigs at healthy dayrates. That should keep its big dividend afloat, even if the company needs to take a pause on growing the payout during the current market slowdown.