Yesterday I asked you to look at free cash flow figures when Intel (NASDAQ:INTC) reports earnings. The first-quarter report is now in the books, and Intel shares were just over breakeven at 2 p.m. EDT, trailing the Dow Jones Industrial Average's (DJINDICES:^DJI) 0.7% rise.

Intel's first quarter was generally fine. Reporting earnings of $0.38 per share on $12.8 billion in sales, the chip giant beat the Street's earnings targets and matched its revenue projections. Intel shipped 5 million tablet processors in the quarter, and the Internet of Things division saw sales surge 37% year over year.

Intel shares are rising under recently appointed CEO Brian Krzanich -- but where are the cash flows? Image source: Intel.

That's all good, but what about Intel's cash flows?

The earnings release only mentioned operating cash flow, which fell 19% year over year to roughly $3.5 billion. The sheet of financial commentary from CFO Stacy Smith filled in the blanks, letting us know that Intel spent $2.7 billion on capital assets in the quarter. That's up 28% from the year-ago period.

So operating cash came in a bit light and capital expenses are up. Naturally, free cash flow plunged a hair-raising 62% when compared to the same quarter in 2013. That's a big step down from $2.2 billion to $800 million.

That's not good news, but it's also not an automatic "sell" signal.

Mitigating the damage, Smith also said that capital spending for the full year is expected to stay more or less flat when compared to 2013. So the first quarter got a bit of a lumpy jolt, but full-year expenses won't skyrocket 28% higher in general. That's comforting.

But that's it. There's no discussion of Intel's operating cash flow projections anywhere, and the topic never came up on the call with analysts.

Intel today trades at 15.5 times trailing free cash flow. Yesterday that ratio stopped at 13.2. Management seems to have stronger cash flows, and therefore a lower price-to FCF ratio, in mind, given the guidance for steady full-year capital investments -- but we don't have the full picture and it's making me nervous. Again.

Owning Intel shares isn't the gentle low-risk ride you might expect from a longtime Dow component and undisputed market leader. The company has abandoned its shareholder-friendly annual dividend bumps. Instead, it is pumping immense cash assets into chip factory upgrades and other capital projects. 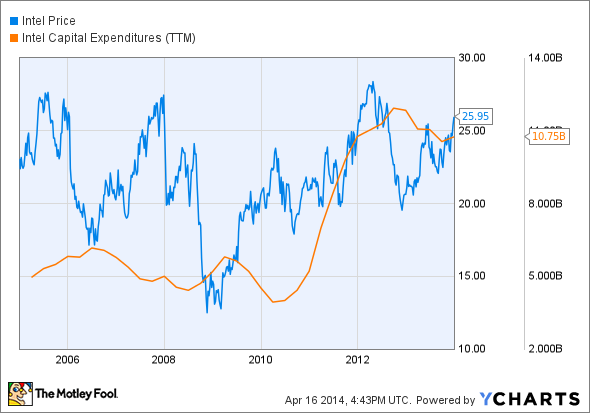 Investing in the future of your business is not a terrible thing to do, especially in the innovation-driven tech sector. Still, the payoff from these gigantic cash investments never seems to arrive. Sales are expected to stay flat in 2014, just like they did last year.

I can still take heart in my Intel investment by looking at the baby steps taken in the Internet of Things and mobile markets. Maybe that's where the big capital expenditures payoffs will eventually drop. Hard to tell, since management is so tight-lipped about its long-term plans. I'm still an Intel shareholder, but it's hard to blame investors with less patience for getting frustrated with Intel's slow progress.