I don't think investors realize how focused SandRidge Energy (NYSE: SD) is on improving shareholder returns. It's the little things really, but these little things add up to big savings.

The company decided that this was not an investment that was creating any value for investors so the company is no longer painting those tank batteries. For perspective, that's enough of a savings to actually fund two additional Mississippian wells each year. This and a whole host of other improvements is enabling SandRidge Energy to improve its rate of return for each well it drills, which is real good news for shareholders.

Improved designs
SandRidge Energy is really focused on optimizing its development plans. One way it's achieving optimal results is through multi-well pad drilling. This industry trend is saving companies a lot of money. Chesapeake Energy (OTC:CHKA.Q), for example, has focused on drilling more wells on multi-well pads. That shift, when combined with other operational efficiencies, has enabled Chesapeake Energy to see a 7% year-over-year decrease in its Midcontinent drilling and completion costs while its spud-to-first sales cycle time is down 30% year over year. That's pushing up the rate of return Chesapeake Energy is earning on each well it drills in the region.

SandRidge Energy is seeing similar results in the Midcontinent. Last year the company drilled about 40% of its wells utilizing multi-well pads, which saved the company $25 million. This year the company's plan is to drill 70% of its wells on pads, which is expected to save the company $65 million. One of the biggest savings in this shift is found in sharing well-site facilities like the tank batteries as well as separation equipment. For example, moving from a single well facility to a four well share facility enables SandRidge to reduce its well facility costs from $540,000 per well to just $170,000 per well.

As the following slide shows, SandRidge Energy's shift to multi-well pads and shared facilities is able to generate significant savings over its competitors due to its focus on costs. 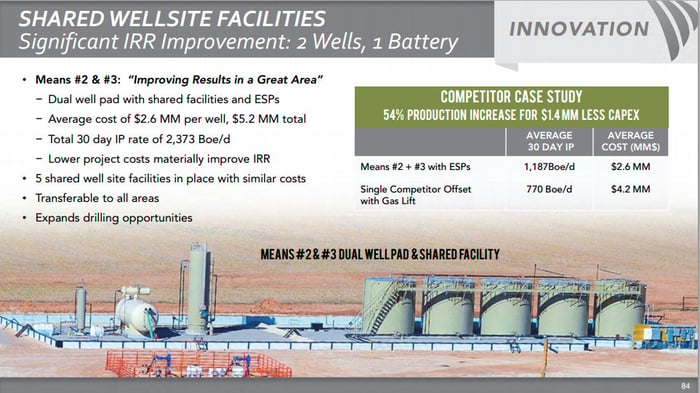 First off we should note in that above slide that in the picture at the bottom of the slide SandRidge Energy doesn't have any white painted tanks with its logo; instead the tanks here are painted a standard green color. Add that savings with synergies from drilling a dual well pad and the company was able to drill these wells for an average of $2.6 million. Those savings, combined with better well design enabled SandRidge's wells to each produce more oil and gas than a nearby competitor's well for a much lower cost. This shift is really moving the needle for the company as a whole.

Investor takeaway
SandRidge Energy is doing the little things to improve its returns. The company is focused on reducing its well costs from the current $2.9 million to $2.7 million, which will boost its internal rate of return per well from 54% to 79%. But it's not stopping there as the company has an aspirational goal to get its well costs down to $2.3 million per well, which would push its returns to 128% per well. That goal will only be achieved as the company continues to work on taking small costs out, which really were adding up. Given what we've seen so far, I think the company will one day achieve and possibly exceed that goal, which will produce really great returns for investors.