Football is the most popular sport in the U.S., and it's not just the NFL that's taking advantage. America's other major pro football venture, the Arena Football League, has made quite a comeback. I recently spoke with an AFL insider to discover how it happened, and what the future holds.

A game of pure offense
For the uninitiated, arena football is the higher-paced, equally as exciting cousin of the NFL. Originally patented in 1990, its field is 50 yards long, bordered by padded walls, with enormous nets in each end zone. 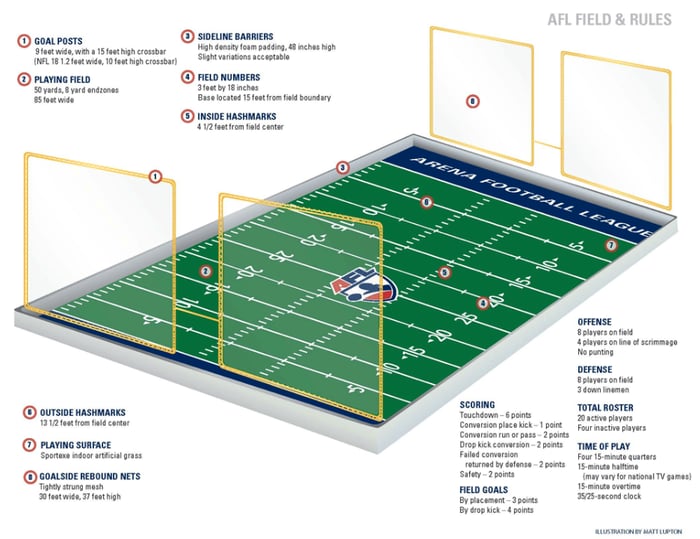 Because of its short field and wide open playbook, game scores in the 50s are commonplace, and individual stat lines are video game-esque. The Las Vegas Gladiators' Kevin Prentiss, for example, holds the record for the most touchdowns in a game with nine. And before he won a Super Bowl in the NFL, Kurt Warner threw 183 touchdown passes in just 42 games for the AFL's Iowa Barnstormers.

The particularly exciting numbers
It's obvious why arena fans find the game exciting, but how many of them actually watch? Adam Robbins, the AFL's senior VP of corporate partnerships, shared that information with me this week.

According to a study from the league and Scarborough Research, at least 20 million adults tune into the AFL every year. That's about a tenth as big as the NFL, but nothing to shrug off -- it's near the size of the entire fantasy football market. Robbins also reveals the league's total attendance, which hit 1.1 million last year, was up 5% from 2012, and this season, new teams in Los Angeles and Portland could mean more growth.

With its latest expansion, the AFL now encompasses nine of the 25 largest television markets in America. Outliers include Des Moines' Iowa Barnstormers and the Spokane Shock, but none of the league's 14 teams sit outside the top 100.

Delving into the dollars and cents
Speaking of TV, 2014 marks the start of a new multi-year agreement with Disney's (NYSE:DIS) ESPN. According to the AFL, the deal gives ESPN, ESPN2, and ESPN News rights to over 10 games annually. ESPN3, the network's online streaming channel, could show an additional 75 games each year, if not more. To note, this is the league's first arrangement with ESPN since both sides' previous deal ended in 2009.

CBS (NASDAQ:VIAC) Sports Network, meanwhile, is in the second year of its agreement with the AFL. Like the ESPN deal, financial details are undisclosed, but Robbins tells me it runs through next season.
CBS Sports Network will air this weekend's AFL Hall of Fame Game in a Saturday night primetime slot, though the league is likely most excited by its move to ESPN.

Unlike CBS's smaller sports-centric network, the two biggest members of the ESPN family are watched by nearly 100 million homes, and they garner more interest than peers like Fox Sports 1 and NFL Network. Don't discount the added advantage the AFL will receive by being on SportsCenter. Highlights, particularly in arena football, can generate interest among casual fans.

While the value of AFL TV rights probably pale in comparison to those of the NFL, they're still worth millions. The average AFL franchise was valued at $20 million nearly a decade ago, so assuming modest growth, $25 million for each of the league's 14 teams isn't out of the question. That's about one-40th the size of the average billion-dollar NFL franchise.

This ratio implies that because the NFL's annual TV rights cost between $950 million and $1.9 billion depending on the network, the AFL's are worth somewhere between $20 million to $30 million a year.

The bottom line
Of course, these estimates aren't perfect. But, put simply, anything near eight figures is an enormous improvement over the league's financial state just a few short years ago. In 2009, the AFL was forced to cancel a full season before declaring bankruptcy. In the aftermath, its new ownership bought the entire league for a mere $6.1 million.

As Robbins is quick to point out, the league's new single-entity model, adopted five years ago, is a big reason for its comeback. By allowing the AFL to own the rights to its teams and players in a structure similar to Major League Soccer, it's "possible for teams to be more successful from a financial standpoint," he says.

Ultimately, this makes it easier for arena football to expand. Recent moves into L.A. and Portland are proof the model is working, and a new presence on ESPN should only help its popularity. While the NFL gets most of the attention, football fans should keep an eye on the AFL. The best may be yet to come.

How the Arena Football League Made a Comeback: An Insider's Perspective @themotleyfool #stocks $DIS $VIAC Next Article
Current