Today continues the trend of weakly indecisive markets that has plagued American investors for much of April. The Dow Jones Industrial Average (DJINDICES:^DJI), which has spent the month bobbing and weaving around a narrow band between 16,500 points and 16,200 points (that's less than a 2% difference), sat at roughly 16,430 points -- effectively breakeven with yesterday's close -- heading into lunchtime.

First-quarter earnings season is now well under way, and two of the Dow's components are dragging the whole index down after disappointing investors with year-over-year bottom-line declines. IBM's (NYSE:IBM) weakness seems symptomatic of the problems now plaguing Big Tech, while UnitedHealth Group (NYSE:UNH) is just the latest health insurer to blame stricter Obamacare mandates on weaker earnings. Similar issues can be seen in the broader S&P 500 (SNPINDEX:^GSPC) index today -- Google (NASDAQ: GOOG) (NASDAQ: GOOGL), WellPoint (NYSE: WLP), and Aetna (NYSE: AET) have been three of the S&P's 10 worst-performing stocks this morning,  alongside other large-cap tech companies.

IBM, which was down 3.3%, reported a 4% year-over-year decline in quarterly revenue and a truly unpleasant 21% drop in year-over-year generally accepted accounting principles net income -- operating earnings per share was down 15% year over year as well, so the decline couldn't be blamed solely on one-time costs. This report threatens to undo much of the positive earnings momentum IBM has generated since the recession, especially since nearly all of this momentum has been driven by cost-cutting and share buybacks (the chart below has not yet been updated with the latest quarterly data): 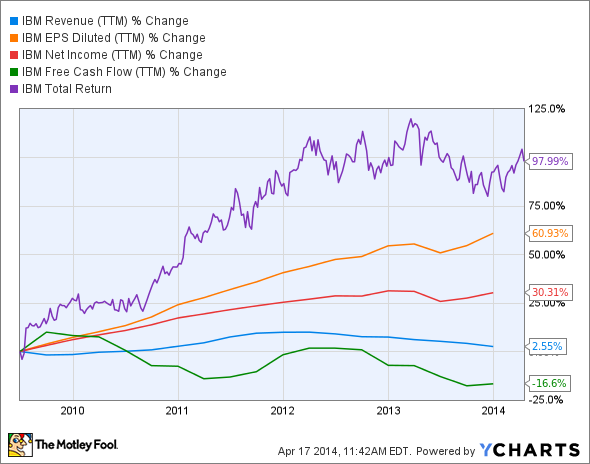 IBM, which recently sold its server division to Lenovo, was dragged down by a 23% year-over-year decline in sales in its hardware segment, but its Chinese sales also dropped by a whopping 20% compared to the year-ago quarter.

Both classes of Google's shares were down over 4% this morning after the search giant provided a different sort of disappointment -- its 19% year-over-year top-line gain, to $15.42 billion for the first quarter, was a hair beneath Wall Street's $15.52 billion consensus.

Big G's EPS of $5.04 was barely an improvement over the $4.97 reported in the year-ago quarter, as higher ad volumes were offset by lower costs per ad and higher operating expenses, which The New York Times pinned on the costs of an ongoing acquisition binge. Google's free cash flow had been falling away from its bottom line in recent quarters as the company gobbled up promising start-ups, but the company's latest report could indicate that EPS will eventually be falling below revenue growth as well: 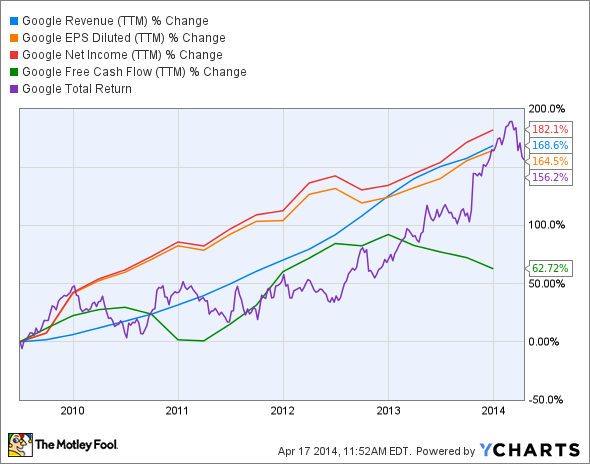 Google has been trading places with WellPoint throughout the morning for the title of "S&P's Biggest Loser," as investors are preparing for a wave of weakness following UnitedHealth's first-quarter report. UnitedHealth, the nation's largest health insurer, lost 4% this morning on weaker than expected top-line results, despite a narrow EPS beat; it pointed out that Obamacare compliance cost it an additional $0.35 per share. UnitedHealth had previously warned that Obamacare would reduce operating earnings by $1.1 billion this year, and news that paying for policyholders' hepatitis C drugs -- primarily Gilead Sciences' (NASDAQ: GILD) Sovaldi -- amounted to $100 million in extra costs for the first quarter. The company still expects earnings of $5.40 to $5.60 per share this year, which only hits Wall Street's $5.60 consensus on the upper bound. The widespread reaction seen on health insurer stocks today could simply be an overdue reaction to share prices that had ran rather far ahead of earnings per share. All three of the health insurers bearing the brunt of UnitedHealth's disappointment today have produced at least twice the growth in share value as they have on their bottom lines: 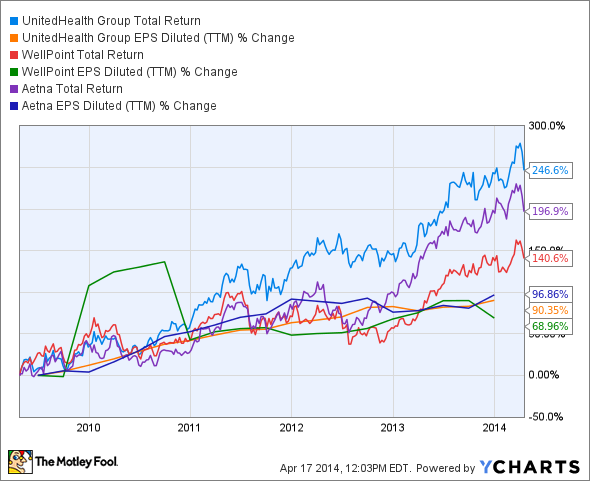 Despite this, all three remain quite cheaply valued. UnitedHealth's P/E is the highest of the trio, but still only touches 13.6. WellPoint's is only 11.2, barely in double-digit territory at all.