Today's income investor is exposed to so much information and so many investing philosophies that sorting it out can be a mess. That's why I went on the hunt to simplify the process. I wanted to find an easy to use cheat sheet that boiled down to one number: something that would expose poor investments, and shine the light on fantastic ones, like insurers Allstate (NYSE:ALL) and American International Group (NYSE:AIG).

I'm talking about "Quadrix Scores." As compiled by bigsafedividends.com, these scores rank some of the best dividend stocks in the S&P 1500 -- for free. It's done by analyzing companies across six categories, then determining the percentile the business ranks compared to other companies.

Here's the components of the rankings:

What Quadrix isn't
Quadrix isn't the Rosetta Stone, and it isn't mistake proof. In fact, there's one hugely important detail this tool completely ignores: what the company actually does.

Moreover, once you understand what AIG and Allstate do, you can infer about the potential risks. For example, after Hurricane Sandy in 2012, AIG reported $4 billion in losses. Allstate, despite limiting the number of policies it writes for catastrophe, took about $1.1 billion in losses.

Quadrix also can't tell you whether AIG and Allstate are good at underwriting insurance. For that, investors can use the combined ratio. A ratio below 100% means the company is underwriting profitably -- paying out less in claims than it receives in premiums. Above 100% means the opposite. 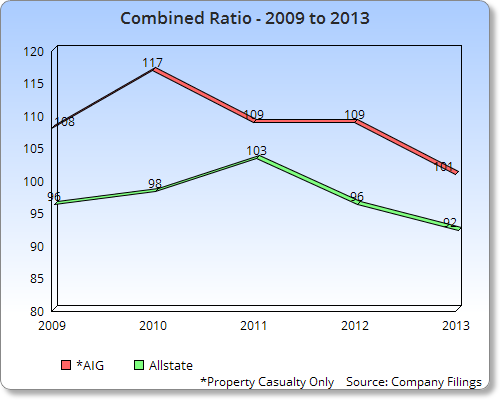 At their core, insurance companies borrow money from customers to invest in mainly fixed-income securities. Borrow is an important inclusion, as a majority of the premiums insurers receive are paid back in claims. That's why underwriting profitably -- as Allstate did in four of the last five years -- is such a game-changer. Allstate is getting paid to borrow money, as opposed to AIG which has consistently taken underwriting losses.

Insurance companies don't have to underwrite profitably to make money, and AIG is a good example of that. The company took huge losses in 2008, but has done well to climb out of an enormous hole. The hope is for AIG's CEO Bob Benmosche to lead the company back to being the strong insurer it once was.

What Quadrix is
Momentum investors look for increasing stock prices. Value investors search for undervalued businesses. Growth investors want growth, and income investors hunt for yield. On their own, each of these philosophies can be successful.

However, by using a more rounded approach, you can get the best of all of these worlds. That's at the core of what Quadrix can do for you. Combine hoards of statistical data, and spit out one number.

Allstate and AIG have a Quadrix score of 94 and 91, respectively. Businesses that rank in the 90th percentile are considered the absolute best of the best.

Bottom line
Quadrix isn't a one stop shop for investors. It won't tell you anything about what the business does, or whether it's in a sector you're comfortable investing in. However, when used in tandem with your personal research, Quadrix can be a great tool to help improve your stock picking.