Rapid advancements in horizontal drilling and hydraulic fracturing have increased oil and gas output to a point where it is hard for midstream companies to keep up. Because midstream companies can't keep up with production, many companies have started shipping their products by rail instead. To meet this demand for shipping avenues, companies like Kinder Morgan Energy Partners (NYSE: KMP), General Electric (NYSE: GE), and Enterprise Products Partners (NYSE: EPD) are preparing to spend an enormous amount of money on midstream infrastructure over the next several years.

How much infrastructure is needed?
According to a recent study done for the Interstate Natural Gas Association of America, energy companies will need to invest $641 billion in midstream energy infrastructure through 2035 to keep up with growing oil and gas production. Where exactly will all this money be spent? According to the study, the largest amount of spending ($313 billion) will be on natural gas infrastructure. The other two necessary infrastructure build-outs are crude oil and natural gas liquids, compromising $272 billion and $56 billion respectively.

GE investing in pipelines
General Electric currently has more than $3 billion invested in 43,500 miles of pipeline across the United States . Over the past few years, GE has been making acquisitions in the oil and gas industry. Recently, it has started to shift its focus to pipeline operations. Managing director of GE's natural resource group, Jim Burgoyne, recently said "there's a lot of need for expansion capital, new pipeline in the ground to tap into and fully exploit the various shale regions – it's fertile ground because there is so much development going on." As oil and gas services start to make up more of GE's overall revenue, expect them to continue investing in midstream infrastructure because the growth opportunities are right in front of them.

MLPs to continue growing
Master limited partnerships (MLPs) are tax advantaged entities which aren't taxed at the corporate income tax rate and give much of their income back to their shareholders through distributions. For this reason, many MLPs have very high yields. Tanjila Shafi, an equity analyst at Standard & Poor's describes MLPs prospects in this way: "What's exciting about midstream MLPs right now is they have value plus growth – they're increasing infrastructure, growing assets, and cash flows."

Kinder Morgan Energy Partners is an MLP that owns a vast amount of pipelines all across the United States. It currently operates approximately 46,000 miles of pipelines and 180 terminals and will only be expanding those numbers in the years to come. The company's capital projects on pipelines have increased from $7 billion in 2006 to $26 billion last year. Along with exposure to transportation of oil and gas, Kinder Morgan also gives its investors exposure to CO2 and petroleum pipelines. Many consider Kinder Morgan Energy Partners undervalued when taking into consideration the amount of assets the company will be building over the next several years. 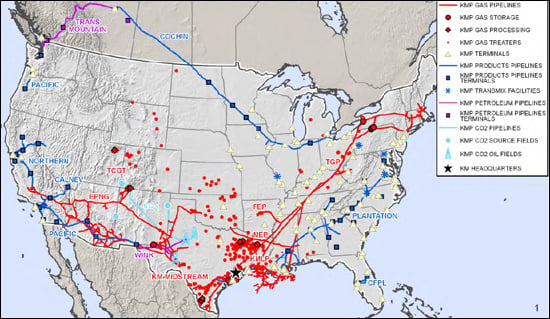 Enterprise Products Partners is another MLP which operates pipelines all across the country. Just like Kinder Morgan, Enterprise plans to continue spending on capital projects. After spending $4.6 in 2013, it plans to spend another $5.8 billion through 2016 . Enterprise's rapid increase in spending on capital projects have required the company to take out large amounts of debt to finance these operations. Although all of this debt might look scary to some investors, Enterprise has recently strengthened its debt portfolio by increasing the average maturity and decreasing the average cost of debt over the last six years.

It is true that these two MLPs will be spending a lot of cash on new infrastructure to keep up with demand but they won't be alone. One analyst suggests that we could see 5 to 10 more MLP IPOs over the course of the next year. All of the new drilling has become so profitable that many small pipelines won't be able to resist the urge to expand their business into new markets.

Putting everything in context
Hydraulic fracturing has led to a massive increase in the amount of oil and gas that must be transported around the country. Because of the lack of pipeline infrastructure, many companies have been forced to use other transportation techniques. This trend will encourage investment in midstream infrastructure. All of this new investment in pipelines and storage facilities should increase revenue once the new infrastructure is functional.