The Dow Jones Industrial Average (DJINDICES:^DJI) is the most widely quoted measure of the U.S. stock market, yet it is terrible at its job. A relic of the late 1800s, the Dow should go the way of stones, furlongs, cubits, the English system, and other old measurement systems that have outlived their usefulness. Yet noninvestors still follow the ups and downs of the Dow since the media constantly reports it. Read along and I'll explain how the Dow is structured, why the Dow is a poor measure of the U.S. market, and why this matters for you.

The Dow
Journalist Charles Dow started the Dow Jones Industrial Average in 1896. The goal of the index is "to provide a clear, straightforward view of the stock market and, by extension, the U.S. economy." The Dow is an index of just 30 stocks, weighted by the stock prices of its component companies and nothing else. To calculate, you simply add up the 30 stock prices and divide the total by the Dow Divisor. When the index was formed, the divisor was 30, but after 117 years of stock splits, dividend payments, and component changes, it currently stands at 0.15571590501117.

This system made sense back in 1896 when the Dow had to be calculated by hand and it was expensive to send information around the country. But this method is a bad measure of the market as it is based solely on the stock price of a company, which has nothing to do with the size of the company. This leads to a few stocks having outsize effects on the Dow. For example, Visa has the largest effect on the Dow with an 8.1% weight given its $200+ stock price, yet Visa is half the size of GE. As GE has a small stock price, Visa has 8 times the effect on the Dow as does GE, which is the second lowest Dow stock by weight. The full weighting of the Dow Jones Industrial Average as of April 17, 2014, is below.

A better way
Now with computers, we can use far more rigorous methods to get accurate measures of the stock market and economy. The S&P 500 (SNPINDEX:^GSPC) is weighted by the market capitalization (size) of its 500 companies. As the below map of the S&P 500 from Finviz.com shows, the relative size of the square is the relative weight of each company. If you look closely, you might be able to see Visa (V) at the top of the map in between Dow stocks Wal-Mart (WMT) and ExxonMobil (XOM). 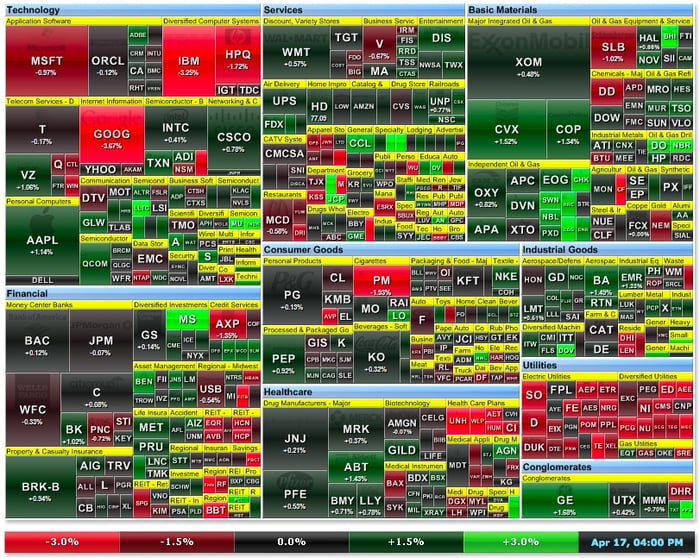 The fact that Visa is the biggest contributor to the Dow while the company is so small compared to the size of the market is ridiculous. Like cursive writing and other terrible ideas we continue to use just out of habit, the Dow should be phased out of existence. There are better measures out there of the state of the market, like the S&P 500, that are less prone to the swings of just a few stocks.