Earlier this week, French energy giant Total (NYSE:TOT) said it would not renew its shale gas exploration leases in Poland. It became the latest of many energy exploration companies to give up on unlocking Poland's shale gas resources. Total's exit leaves only ConocoPhillips (NYSE:COP) and Chevron (NYSE:CVX) left to explore for shale gas that could help Poland wean itself off of Russian gas supplies.

Drilling down into Poland's gas resources

Poland is estimated to have 146 trillion cubic feet of shale gas and another 1.8 billion barrels of shale oil, according to the U.S. Energy Information Administration. To put the natural gas number into perspective, 5 trillion feet of natural gas is enough to meet the needs of 5 million American households for 15 years. Given that 38.5 million people live in Poland, the country should have enough natural gas resources to offset a significant amount of Russian supply. Unfortunately, production of this gas isn't proving to be economically viable as these reservoirs are more challenging than the industry anticipated.

Total noted that while the country's prospects remain promising, the exploration process is still in its infancy. Because of that the industry needs to see more data to understand the geology of the Polish basins. Total, however, won't be among the companies investing to get that data. Instead it's up to ConocoPhillips and Chevron to prove that these plays can be economically developed.

More tests to come
ConocoPhillips and partner 3Legs Resources plan to drill three new shale test wells this year. Two of those wells will be vertical tests, with a third test being a long lateral well. If successful it could provide a nice boost to ConocoPhillips in the future as the company has 354,000 net acres in the play and a 70% working interest in these exploration areas, as seen on the left-hand side of the following slide. 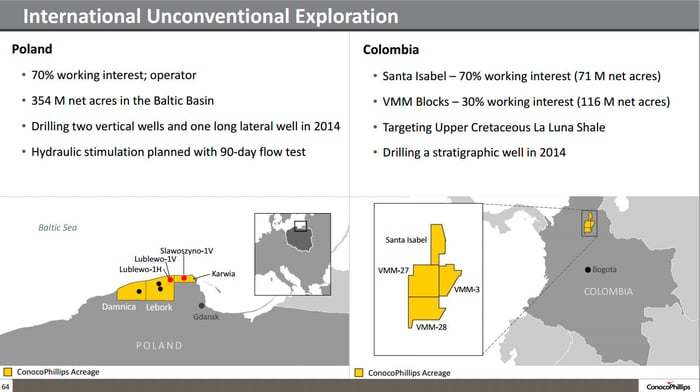 Meanwhile, Chevron just a few weeks ago entered into a partnership with Polish gas giant PGNiG to explore for shale gas in the nation. The 50% joint venture will allow both companies to reduce costs and risks as Poland's shale basins are explored. Chevron is accessing the results from the four exploratory wells it has drilled across its four exploration licenses.

So far the industry has only drilled about 50 exploratory wells in Poland. It needs to drill hundreds more just to obtain a reliable assessment of the potential of the nation's shale basins. However, initial results have been so poor that the country is running out of companies willing to spend the capital necessary to really explore these shale plays.

Investor takeaway
The changing dynamic in Europe due to Russia's recent moves in Ukraine could eventually encourage more companies to explore for gas in Poland, even with Total giving up. The country simply has one of the few large potential supply basins in Europe. That's why all eyes will be on ConocoPhillips and Chevron to see if either can produce economical gas, because as of now these two companies represent the last hope for Poland's dreams of unshackling itself from Russian gas.