Recent data suggests that the U.S. real estate market may finally be back on solid ground. Foreclosures dropped 23% year-over-year in March, and are now at the lowest level since 2007. While this means that the fantastic deals on homes are probably coming to an end, it does mean that strength and stability are returning to housing, which is much healthier for the long term. Here's what you can expect as the market continues to improve.

Higher prices are not always a bad thing
Less foreclosures will mean that a lot of the bargains we've seen over the past few years will begin to disappear. Also, when there are a ton of foreclosures on the market, it creates some level of downward pressure on all home prices. Not only is there more inventory, but there is a viable lower-priced option that home sellers have to compete with.

Once the foreclosures are removed, home prices will most likely rise, but in a healthy way. A housing market that rises by 15% one year, falls 10% the next, then rises by another 15% is not a healthy one. Home prices are not supposed to be volatile!

Remember when home prices rose steadily and predictably?
Instead of rapid price increases (like we saw in 2013) and drops (like we saw from 2008-2010), as the number of foreclosures falls, we should see more predictable and steady rises as we saw before the early 2000's when the market began to go nuts. Consider the charts below. The chart of 1991-2000 represents a healthy housing market. The chart from 2000-present does not. 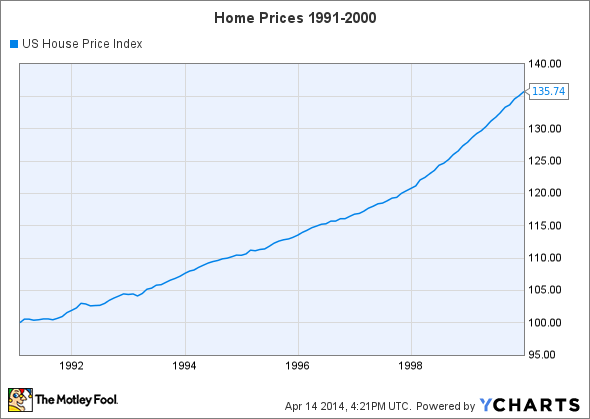 Also notice in the first chart how "healthy" doesn't mean the exact same gains year after year. Inflation is higher in some years, mortgage rates rise and fall, and other economic factors can accelerate or slow the rise in prices. However, it should happen in a controlled manner that the market can absorb. Not like this... 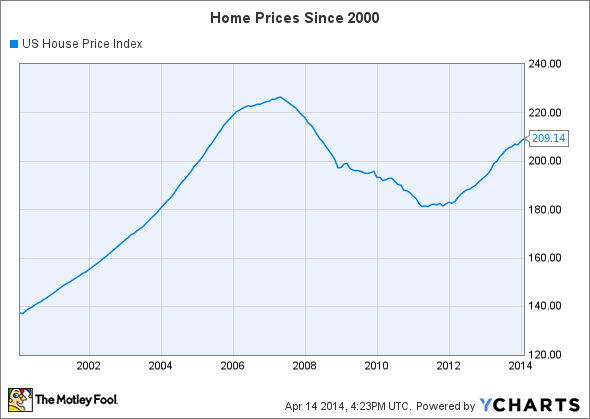 Lenders will find a happy medium
I recently wrote an article about lenders relaxing their standards, but we are nowhere near where we were before the crisis hit. Before the crisis, there were zero-down loans regardless of credit score, interest-only loans, reverse-amortization loans, and no-documentation loans. Thankfully these products don't exist anymore!

A few years later, after the crisis hit, your credit had to be nearly perfect to get a loan. Even then, lenders were insisting on 20% down and extremely thorough documentation. Now, the low-down payment options are reappearing, you need good (but not great) credit to qualify for a loan, and your interest rate and payment structure will be easy to understand.

Lending standards should probably be even a little looser than they are now, but as we start transitioning back into a healthy housing market, lending standards will find a happy medium between the two extremes. Not everyone should be able to buy a house, but it shouldn't be an exclusive club either.

The big picture
We aren't completely out of the woods in terms of foreclosures yet, and we're probably still a few years away from a completely healthy housing market. Some states have very lengthy foreclosure processes and backlogs, so we're still seeing a lot of new inventory in certain areas. However, as long as the foreclosure trend in the U.S. remains a downward one, we'll gradually see home prices start to behave like they used to.