The Dow Jones Industrial Average (DJINDICES:^DJI) was up 112 points in early afternoon trading, but many eyes moved away from the ticker tape and to the beleaguered real estate market around the country.

A new report issued by Zillow (NASDAQ:ZG) on Monday predicts that home prices in more than 1,000 U.S. cities and towns have either already or will very soon eclipse the highest valuations seen since the peak of the real estate bubble.

The report and other recent assessments of the real estate market paint an interesting picture for the next few years. We'll attack the issue today from two angles: first, what is really happening with home prices, and second, how to play this for the long term.

Home prices are definitely on the rise 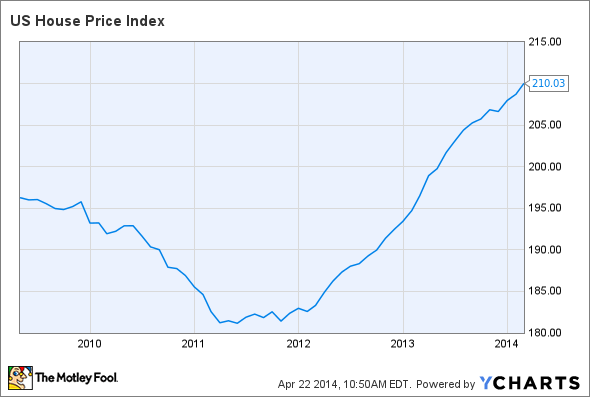 Many homeowners viewing the chart above are likely feeling a bit excited. After holding on for dear life through the economic troubles of 2008 to today,  they certainly welcome rising equity values that are restoring all the lost wealth lost when the bubble burst.

Zillow Chief Economist Stan Humphries called the new report a "mixed bag of news" in a video interview on The Daily Ticker. He went on to say that:

On the one hand you're happy that home prices are recovering so nicely. On the other hand home values were definitely overvalued in 2006 and the fact that just so shortly after the greatest housing recession of the century we're already seeing a lot of metros return to their peak levels is a sign for how robust the recovery is ... but some markets are definitely in danger of overheating again.

Economic data from other sources justifies Humphries' claims of rising prices, and no one would counter his belief that values in 2006 were too high. He is also correct that there are still issues that could cause homeowners and investors problems.

Take a look at this chart of U.S. existing home sales and the U.S. Pending Home Sales Index. 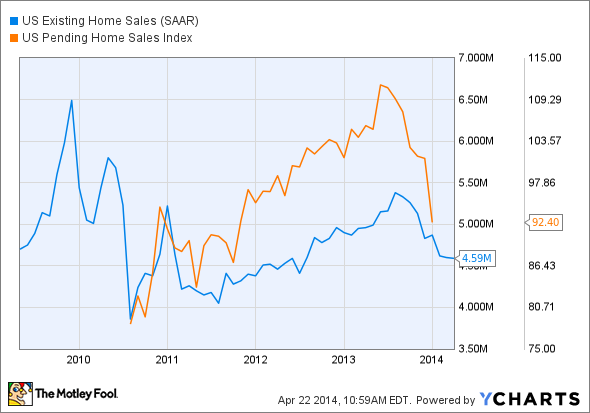 These two indicators show us a few interesting trends about the market, and demonstrate some of the weaknesses not seen in the home price numbers alone.

First, take the existing home sales indicator, which tracks the number of existing homes sold for a given period. As the chart clearly demonstrates, this metric tracked an improving market from the middle of 2011 through to fall 2013. Since that time, though, existing home sales have plummeted, bucking the two-year trend.

Second, the U.S. Pending Home Sales Index, which tracks homes that are under contract to be sold, but have not yet closed. It's a leading indicator for what home sales will likely be in the upcoming months. Just like the existing homes metric, we see a strong improvement from 2011 through 2013, and then a clear reversal in 2014. These implies further sales weakness through the spring selling season for homebuilders and existing homeowners.

How to play it for the long term

A variety of reasons could be driving this reversal, but the point is clear: the real estate market, however improved, still has weaknesses to be addressed. The medium and long-term answers are anything but clear.

The two conclusions above paint a clear picture for those who prefer investing in equities instead of real estate.

The National Association of Realtors projects that the number of new homes sold will increase by 57.8% from Dec. 31, 2013, to June 30, 2015. That is a gigantic improvement in new home sales, and almost certainly an optimistic one for homebuilders (and Realtors, for that matter). I think this is overly optimistic, to say the least.

The rate of new home sales has been essentially flat for the last six quarters, even with the lowest interest rates in a generation. Buyers have turned to acquiring quality existing homes at lower price points instead of new construction.

Based on the trends in the Pending Home Sales Index  and the rising home values, I see the trend in new construction continuing. As such, I am avoiding homebuilder stocks.

What, then, is the play? Home improvement, like Dow Jones component Home Depot (NYSE:HD). This big-box home improvement retailer is perfectly aligned to prosper alongside the homeowners who suddenly have enough equity to begin the projects they've been putting off. 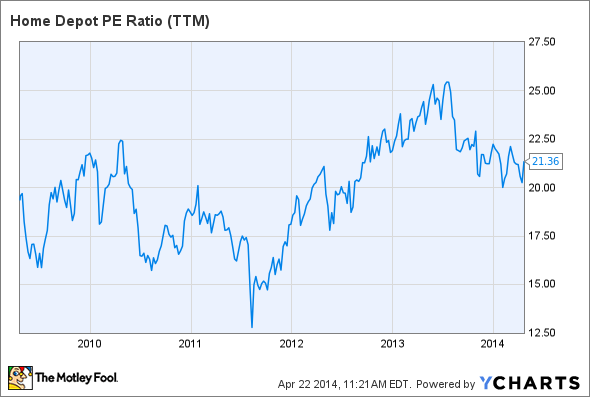 If you're looking for a play that takes advantage of rising home prices without the volatility of quarter-to-quarter new home sales, Home Depot may be the answer.