If it wasn't already clear to investors that Chipotle Mexican Grill (NYSE:CMG) and McDonald's (NYSE:MCD) are moving in vastly different directions, then their first-quarter earnings reports should have hammered the point home. Same-store sales jumped 13.4% at Chipotle, but fell 1.7% at McDonald's U.S. locations.

McDonald's is struggling with rising commodity costs, a need to modernize its brand, and competition from all angles. Chipotle, meanwhile, is breezing past the competition, so confident in its customer loyalty even after a "bad winter" that it's raising prices. There are plenty of other differences between the two food purveyors, of course, but one that's often been ignored is how a minimum wage increase would affect the two brands. 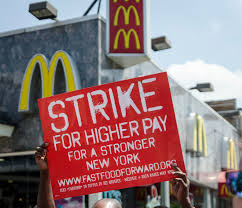 One of many protests against McDonald's for higher pay. Source: Wikipedia.

Trying to make a dollar out of 15 cents
In the fight for a higher minimum wage, chains like McDonald's have been at the center of the spotlight, while Chipotle seems to be getting a pass. Restaurant workers and union organizers have protested outside many Golden Arches locations, with workers in New York demanding a raise to $15 an hour and others recently filing a class action suit, accusing McDonald's of wage theft. Chipotle has not been completely ignored by protesters, but the company is often lauded for paying workers more than minimum wage and for the upward mobility it provides, as crew members often rise through the ranks to well-paying management jobs.

A recent study by the Federal Reserve Bank of Chicago, based on data from California, Illinois, and New Jersey, showed one effect of raising the minimum wage was that it forced underpaying fast-food chains to close, but those locations were often replaced by restaurants like Chipotle that are already paying above minimum wage.

While McDonald's resists calls to pay its workers more, Chipotle insists it would have no problem absorbing a minimum wage increase, as average wages are already at $9 an hour. Co-CEO Monty Moran said the effects of raising the minimum wage to $10 per hour would not be "too significant," and on last week's earnings call, CFO Jack Hartung said California's plan to lift base wages to $10 an hour in 2016 would only cost the company a few million dollars. Considering the effects that the hike would have on competitors like McDonald's, an increased minimum wage would probably favor Chipotle, as it would put more pressure on its rivals.

Since most of McDonald's locations are franchised, the decision to raise wages ultimately falls into the hands of franchisees and not in those of corporate executives who take the blame for low pay, which may explain the rub. While McDonald's as a company has higher profit margins than Chipotle, that difference comes from the business model -- franchising yields higher margins than operating stores -- but franchisees generally have even lower margins than corporate-owned stores as they have to pay royalties and advertising costs back to headquarters in addition to the usual expenses of running a restaurant. Last year, Arcos Dorados, the largest McDonald's franchisee in the world and Latin America's biggest fast-food chain, had a profit margin of just 1.3%. Arcos Dorados operates outside the U.S., but the numbers are still representative. A margin that thin would easily disappear in an industry where labor costs generally register above 20%.

Smiles are still free
The refusal to franchise also gives Chipotle more control over its brand image, whereas McDonald's has little influence over franchisees when it comes to pocketbook issues that are damaging its image. Like Chipotle, Starbucks has a reputation for paying its workers well and does not franchise. McDonald's burger-slinging brethren, meanwhile, employ the same franchise model, and have also been the target of wage protests.

Ultimately, the minimum wage issue may just be one small component of the battle for America's fast-food dollar, and many other factors separate the burrito roller from the home of the Big Mac. But at a time when Chipotle's comps are growing by double digits and McDonald's are falling at home, Mickey D's can ill afford to fall further behind. Any wage increase is just going to bring more headaches to McDonald's, and is likely to drive even more customers into Chipotle's arms.