I'm pretty bullish on the energy sector. While my portfolio is loaded with energy stocks, I'm always on the lookout for new names to add. There are two energy stocks in particular that I really like, but I'm hesitant to add either because I see both as being a little too risky for my tastes. Not only that but as separate entities, neither offers the complete exposure to America's energy boom that I'm seeking. This got me thinking that if these two young stars merged, the combination would make a great energy growth stock.

That's why I'm proposing a marriage of sorts between Magnum Hunter Resources (NYSE: MHR) and Halcon Resources (NYSE:HK). While both have a dynamic future by going it alone, I think the sky is the limit for the combined entity. Here's why.

Singular focus is good but not great

Magnum Hunter Resources looks like it has a bright future. The company is growing fast, has a solid management team, and is just loaded with energy potential. I really like its strong oil-rich position in the Williston Basin, which when combined with is liquids-rich position in the Appalachian Basin gives the company a promising one-two punch. As the following slide shows, Magnum Hunter Resources has amassed solid positions in both key plays. 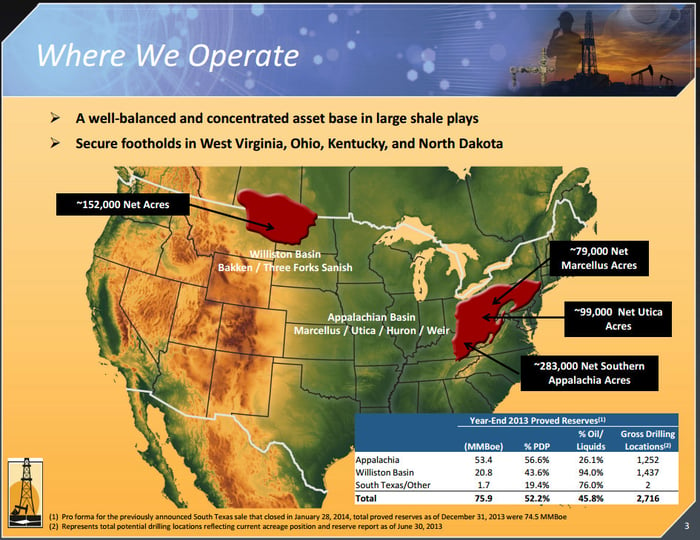 The company will use those two basins to achieve daily production of about 35,000 barrels of oil equivalent by the end of this year. That strong growth is more than double the production rate of last year.

That said, it is beginning to produce more natural gas, which is still out of favor. That's because its current focus is on drilling in the gassy Marcellus and Utica Shale plays after it sold its oil-rich Eagle Ford assets last year. The lack of oil fueled growth is one reason why I've shied away from the company. On top of that, it has a fairly complex balance sheet that's weighed down by debt due to its aggressive approach.

Halcon Resources, on the other hand, is an oil-rich company as 84% of its reserves are oil. Further, as the following slide shows it has assets in the Bakken/Williston Basin, Texas, and the emerging Tuscaloosa Marine Shale.

The problem I have with Halcon Resources is that its aggressive growth plans have led to a few stumbles along the way. For example, Halcon Resources recently gave up on the emerging Utica Shale after its first few wells didn't turn out as expected. Not only that, but its debt is a bit high as Halcon Resources, like Magnum Hunter Resources, has used debt to fund much of its growth.

Also, a move like this would allow the combined entity to achieve synergies in the areas of overlap and combine best practices to save money. Further, it would then have greater scale so that it could simplify and improve its balance sheet. Add it all up and there's a lot of upside potential.

Daddy wants this bird out of the nest
While this particular merger idea is merely a figment of my imagination, it's not completely out of the realm of possibility. Halcon Resources CEO Floyd Wilson has gone on record in saying he's looking to sell his company as soon as possible. While a cash sale to a larger oil company is his ideal exit, that will take a while. On the other hand, a stock-for-stock merger with a company like Magnum Hunter Resources would provide him with a much more saleable asset once the merger synergies are achieved that could net everyone a very nice profit when a bigger oil company comes calling.