It is never a good sign when a company's stock price rises 5% on news of a so-so quarter, but that is exactly what happened when Coca-Cola (NYSE:KO) announced its first-quarter results last week. The stock rose after reports of 2% global volume growth and a 1% sparkling volume decline were good enough to beat low expectations.

For 122 years, the company relied on Coke and other soft drinks to drive enormous growth. It wasn't until the 12th decade of its existence that American consumers decided they'd rather drink coffee, bottled water, and energy drinks than continue chugging soft drinks.

Even PepsiCo (NASDAQ:PEP), which owns at least as many healthy beverage brands as Coca-Cola, has suffered tremendously over the last few years as consumer preferences have changed. However, instead of running away from the soft-drink business, Coca-Cola is ramping up advertising to increase sales to loyal customers.

The right decision
Many investors' instincts may be to encourage Coca-Cola to diversify into other product lines. Indeed, the company erred by not making a stronger entry into the energy-drink category sooner than it did. However, nearly 75% of Coca-Cola's global revenue and about 60% of its U.S. revenue is generated by soft drinks. As a result, Coca-Cola must continue to reinforce its competitive position in the soft-drink market, lest it cede market share to a resurgent PepsiCo.

Defending its market share will not be as difficult for Coca-Cola as for some other companies. Coca-Cola's soft-drink brands are some of the best-selling beverages in the world; Coke, Diet Coke, Sprite, and Coke Zero account for 34% of U.S. soft-drink sales. Coke and Sprite alone account for almost 22% of U.S. liquid-refreshment beverages. Clearly, Coca-Cola's soft-drink brands are worth a lot of money; it would be foolish for the company to abandon its core products. 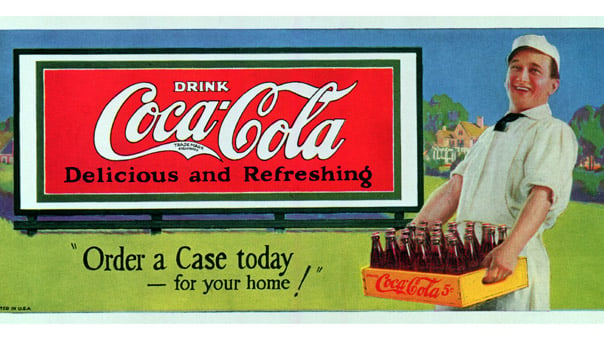 Soda decline an anomaly
Despite declining volumes in the U.S., its fourth-largest market, management clearly believes that soft drinks have a better future than is indicated by the immediate past. On the first-quarter conference call with analysts, CEO Muhtar Kent said the company will increase global advertising by $400 million to $3.7 billion in 2014 and will increase the budget to $4.3 billion by 2016.

Coca-Cola's sponsorship of the Sochi Winter Games led to significant market share gains in almost all beverage categories in Russia. The 2014 World Cup in Brazil, of which Coca-Cola is a major sponsor, provides another opportunity to boost market share in an emerging economy.

In addition to standing behind its regular soft drinks, Coca-Cola is expanding its reduced-calorie portfolio with Coca-Cola Life, a stevia-sweetened, mid-calorie soft drink available in Argentina and Chile. Coca-Cola Life has had so much success in recruiting new and former soft-drink consumers in the South American countries that the drink is going to be introduced to new markets in 2014.

PepsiCo is also betting on mid-calorie drinks with natural sweeteners. CEO Indra Nooyi told investors on PepsiCo's fourth-quarter conference call that its sugar-and-sweetener combination beverages showed promise, and the company plans to introduce the beverages to the U.S. market in 2014.

Both companies, it seems, are not ready to call it quits on the soft-drink market just yet. They have good reason to be optimistic, too. Even as the U.S. market declines, worldwide soft-drink consumption continues to grow. Global soft-drink consumption increased from 9.5 gallons per capita in 1997 to 11.4 gallons per capita in 2010 -- a 1.4% compound annual growth rate. If the U.S. were excluded, the growth rate would be higher. In any case, it seems the soft-drink business is more likely to grow than shrink.

Diversifying responsibly
Ultimately, Coca-Cola will benefit from investing in healthier alternatives while maintaining its strength in soft drinks. Even Warren Buffett, a fan of companies that do the same thing year after year, has warned Coca-Cola not to become complacent. It needs to evolve.

However, making panicked acquisitions like the tobacco companies did in the 1980s is not the best course of action. Coca-Cola and PepsiCo missed the boat on energy drinks; Coca-Cola reportedly (and rightfully) decided to forgo an acquisition of a major energy-drink brand in what would have been an expensive $15 billion-plus deal in 2012. Instead of chasing missed opportunities, Coca-Cola needs to expand responsibly into healthier categories.

PepsiCo positioned its portfolio for the heath trend with brands like Tropicana orange juice, Naked juice, and zero-calorie Lipton iced tea. For its part, Coca-Cola already owns healthy brands like Minute Maid juice, Honest tea, vitaminwater, and Zico coconut water. It also owns a 10% stake in a coffee company, providing it exposure to a category that PepsiCo does not have. These efforts will help Coca-Cola evolve without losing sight of its core brands.

Bottom line
Coca-Cola is a soft-drink company. There is no getting around that fact. The company can make common-sense investments in other beverage categories to diversify its revenue base, but it still needs to prop up its soft-drink business. Coca-Cola shareholders should rejoice that the company is standing behind its soft-drink brands with increased advertising; the company's future depends on the future of soft drinks, so increasing soft-drink brand advertising is a good way to increase shareholder value. Shareholders who think otherwise should reconsider their ownership of the world's largest soft-drink company.