The Dow Jones Industrial Average (DJINDICES:^DJI) was moving sideways today, down by less than two points as of this writing. But Dow member AT&T (NYSE:T) is hitting the brakes very hard, falling 3.2%. That sliced seven points off the Dow by itself, and is making all the difference between an up day and a down day for the elite index.

You should probably count Verizon's (NYSE:VZ) 1% price drop against AT&T as well, raising the latter telecom's negative Dow impact to a full 10 points. The driver of all this telecom-based damage on the blue-chip index comes from AT&T's first-quarter report, posted after hours last night.

It's not that the first quarter itself was terrible. AT&T reported its strongest revenue growth in two years and the best contract-bound subscriber additions in a first quarter since 2009. The latter metric wasn't even helped by the Leap Wireless acquisition, making it all the more impressive.

But AT&T committed the cardinal sin of not raising its full-year earnings guidance. The company reiterated its projection of roughly 5% earnings growth in 2014, well below the 8% growth Wall Street analysts expect.

The company expects margin compression this year as the Leap acquisition is blended into AT&T's overall operations. But that view alone wouldn't trigger an industry-wide sell-off in which all of the major telecoms show red for the day.

AT&T stores are getting plenty of foot traffic right now, but it doesn't translate into huge earnings growth anymore.

More to the point, AT&T doesn't see any positive trends to balance out the Leap-related pain.

In a call with analysts, CFO John Stephens described the wireless industry as a "noisy competitive environment." So there's pressure from smaller rivals, not to mention Verizon, that will limit how effectively AT&T can protect its subscriber growth and profit margin.

Smartphone sales are growing, but not at the torrential pace of the last five years. If there's another wave of game-changing hardware coming up (and one might be on the horizon), AT&T isn't counting on it yet.

Long story short, AT&T is seen as a bellwether for the mobile industry, and the titan is falling short of overheated expectations. At the same time, I'm not entirely sure that all of today's market reaction to this report makes sense, given that the entire sector is trading down despite much of AT&T's angst coming from stronger competition. 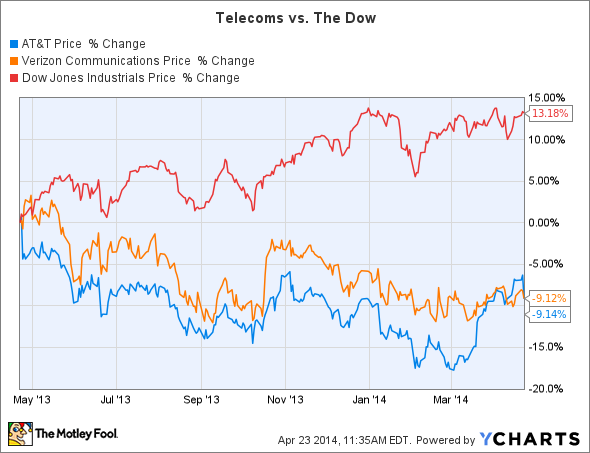 Verizon and AT&T added to an already heavy history of underperforming the market. Verizon reports results tomorrow morning, and it will either underscore or contradict what AT&T said today. Look for that report to get a clearer idea of where the American wireless industry is going.