Please ensure Javascript is enabled for purposes of website accessibility
Log In Help Join The Motley Fool
Free Article Join Over 1 Million Premium Members And Get More In-Depth Stock Guidance and Research
By Beth Nichols – Apr 23, 2014 at 8:50AM

Valeant's proposed acquisition of Allergan would create a virtual lock on the cosmetic injectables market, bringing several of the top competitors into one portfolio.

Valeant Pharmaceuticals  (BHC -0.86%) announced yesterday that it plans to acquire Allergan (NYSE: AGN) with the help of investor Bill Ackerman. Should the plan succeed, the acquisition would create a dermatology and ophthalmology giant and bring a number of the leading cosmetic pharmaceutical brand names under one roof.

Allergan produces some of the most widely used and highly recognized products in the medical aesthetics world. Its blockbusters include neurotoxin Botox, dermal filler Juvéderm, and eyelash enhancer Latisse. Valeant, meanwhile, has built its own portfolio of eye and skin products, many of which it acquired with its purchase of Medicis in 2012. A number of these products face the strongest competition by products sold by Allergan.

By combining the two companies, Valeant plans to create significant production and marketing synergies. In its press release, Valeant estimated that the merger would create $2.7 billion in annual cost synergies, 80% in the first six months alone. Valeant would also be establishing dominance in several key categories.

Wrinkle reducing is big business
If Valeant were to successfully purchase Allergan it would have an impressive portfolio of superstar brands in the highly lucrative medical aesthetic space. It would accomplish this by essentially purchasing its own competition for some of the leading procedures.

Commonly referred to as injectables, the top non-surgical cosmetic facial procedures include botulinum toxin injections to release the muscles under the skin and ease wrinkles and dermal fillers, which use agents such as hyaluronic acid to fill in facial folds to add fullness.

The American Association of Plastic Surgeons reported that its members performed over 6.3 million botulinum toxin injections for wrinkle reduction 2013, making this the most popular non-invasive cosmetic procedure. The market continues to grow, showing a 3% increase over the previous year. A lesser-known competitor, Dysport, was picked up by Valeant when it acquired Medicis. 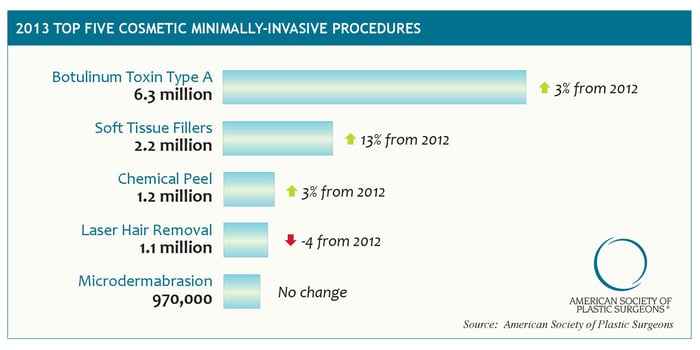 Soft-tissue fillers ranked second in popularity in 2013, with 2.2 million procedures performed, a 13% increase over 2012. Valeant's dermal filler portfolio currently includes Restylane, Perlane, and Sculptra; with the acquisition of Allergan, it would be adding market leader Juvéderm, ensuring a virtual lock on this category.

Medical aesthetics is a significant category for pharmaceuticals because procedures are almost exclusively paid for out-of-pocket, bypassing health insurance and the cost-trimming realities of managed care. The average cost for Botox injections nationwide is about $500. Botox's wrinkle relaxing effect will usually last three to six months, giving the product a strong base of repeat customers.

And then there's Merz
Xeomin, produced by Merz Pharmaceuticals, is often named as an alternative to Botox and Dysport. The product has endured an on-again, off-again relationship with the U.S. market, in large part due to attempts by Allergan to block its entry into the U.S.

No doubt the Valeant/Allergan deal could mean more robust headwinds for Merz in its attempts to gain U.S. market share for its injectables portfolio.

It's more than skin deep
Of course, the story about Valeant and Allergan is about much more than cosmetic injectables. The combined portfolios of both companies extend beyond medical aesthetics. Botox alone has or is pursuing indications for several medical conditions including migraines, excessive sweating, and bladder control.

Nevertheless, it appears that the real battle is for control of a significant piece of the lucrative and ever-expanding medical aesthetics market.