Industrial conglomerate Danaher Corporation's (NYSE:DHR) recent results were better than they superficially looked. Even though its second quarter guidance was lower than the market had hoped for, there is good reason to believe that Danaher has upside potential in 2014. Moreover, the earnings report suggested good things for other companies such as dental distributor Patterson Companies (NASDAQ:PDCO) in 2014, but less so for testing and measurement company Agilent Technologies (NYSE:A). On balance, the positives outweighed the negatives, but is the company's stock still a good value?

3 reasons why Danaher's results were good

Danaher is the sort of company that often disappears under the radar of investors due to its low dividend yield and its P/E ratio of over 20 times current earnings. Moreover, its less than double-digit forecast EPS growth rate doesn't excite many. On the other hand, it's one of the best run companies in the industrial sector, and has relatively defensive end markets.

Focusing on the recent results, there are three key reasons why investors should like the company's stock.

First, profits and core margins grew in each of its segments. 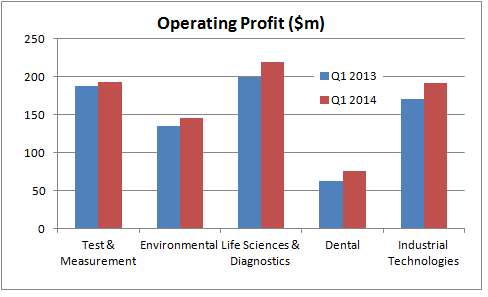 In addition, Danaher managed to grow core margins in each segment. The figures in the chart below are expressed in basis points, whereby 100 basis points is equivalent to 1%. 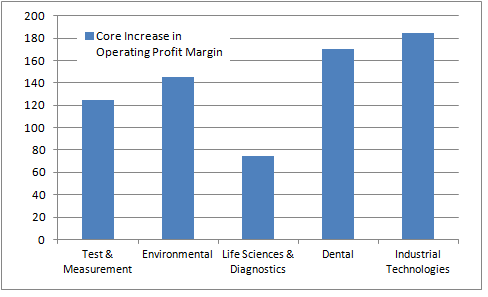 In addition, Fools should appreciate that the impact of acquisitions reduced reported operating margins, but Danaher has a history of integrating acquisitions and then achieving margin expansion afterwards. A good example of this would be its $6.8 billion purchase of Beckman Coulter (life sciences and diagnostics segment) in 2011, from which Danaher has engineered good growth.

The second reason is that Danaher's strong ongoing free cash flow generation gives it flexibility to "buy earnings growth" through acquisition activity. Danaher generated more than $3 billion in free cash flow in 2013 (equivalent to around 5.9% of its market cap), and its management affirmed that acquisition activity was the "primary focus" of its capital allocation strategy. On the conference call, CEO Lawrence Culp outlined that Danaher had the ability to deploy $8 billion toward acquisitions, and that a purchase of part of Agilent's operations is a possibility.

The third reason is that Danaher's guidance looks conservative. For example, it kept its forecast for 2%-4% core revenue growth for the full year, but it recorded 3.5% in the first quarter. In addition, management's commentary on conditions in North America (45% of 2013 sales) was positive: "We are encouraged by the building strength during the quarter and the way we exited the first quarter and even way we've begun April here."

Indeed, Europe was up by low-single digits in the quarter and sales in China grew in by double-digit amounts.

Danaher segment commentary
As the charts above demonstrate, Danaher did well with all its segments overall, but digging into the details reveals a mixed performance. On the positive side, the industrial technologies segment continues to improve; this suggests that the industrial sector is improving. Core revenue growth came in at 3% (reported 4.5%), which was at the top end of Danaher's forecast of 1%-3% for the full year.

Furthermore, the life science and diagnostics and environmental segments both reported 4% core growth, with the latter driven by ongoing strength in emerging market spending. However, the most positive point was the 6% core growth in the dental segment. It's the smallest profit generator for Danaher, but dental consumables sales have been weak for some time and any uplift is welcome. Dental distributors like Patterson Companies have been struggling to generate any growth in recent times. Danaher's management talked of "very broad based" strength around the world, which may be good news for Patterson Companies going forward.

On a more negative note, test and measurement core revenue growth was only 1% (reported 2%) and management described the segment has having undergone a "choppy start" to 2014, mainly due to communications. This might be a slight concern to Agilent investors, because Agilent has already disappointed the market with a 7% drop in first quarter revenue in its electronic measurement segment. Moreover, Agilent's weakness was in aerospace/defense, so if what Danaher said about communications spending (mobile carriers, large enterprises, and similar networks) in the quarter carries over into Agilent's next results, then investors have cause for concern.

The bottom line
There were more positives than negatives in the report, but there is a feeling that Danaher needs to beat estimates or make an eye-catching acquisition in order to take its stock aggressively higher. The good news is that history suggests that its management is capable of doing both. Moreover, its guidance looks a little conservative, and on a free cash flow yield basis the company's stock remains a good value.