During an eight-year run from 1994 to 2002, shares of health-care conglomerate Johnson & Johnson (NYSE:JNJ) surged 500%. During that time, the company, which owns some of the most iconic brands in the industry, became a force to be reckoned with.

Since then, however, shares have only averaged 4% growth per year. With such tepid movement, is it even worth owning shares of this giant?

Every spring, I review all of my stock holdings to see whether or not they still warrant space in my portfolio. Currently, Johnson & Johnson accounts for 5% of my overall holdings.

Because I'm loathe to sell stocks, I consider the most salient -- though general -- arguments that bears put forth and see how I feel about them.

When it comes to Johnson & Johnson, there's one primary drawback that investors point to, but it's a big one. Here's what it is and how I feel about it.

The company is simply too big to beat the market. Heck, it kind of IS the market.

Currently, Johnson & Johnson is valued at $285 billion. Because an S&P 500 exchange-traded fund like SPDR S&P 500 ETF (NYSEMKT:SPY) is weighted to give more influence to larger companies, Johnson & Johnson's stock accounts for 1.7% of the ETF. That's the fifth-largest allocation, and by far the highest for a health care company.

Obviously, when a company gets that big, it becomes much harder to outperform the broader market. Revenue growth has plodded along at a 6% rate last year, while earnings ticked up 8%. Those are certainly respectable numbers for a company the size of Johnson & Johnson, but surely, there are better places for your money, especially considering the stock now trades hands for a pricey 18 times earnings.

My take: Don't forget the power of dividends in boosting your returns.
It's true, I have no illusions of Johnson & Johnson producing multibagger returns for my portfolio. But I, like many Foolish investors, have a part of my portfolio that's dedicated to growth stocks like that.

Johnson & Johnson, on the other hand, occupies a part of the portfolio that's dedicated to businesses that have significant moats around them and pay out hefty dividends that add up over time.

On the moat front, Johnson & Johnson has three different divisions. The consumer division -- which is the most well known for brands like Band-Aids and Neutrogena -- accounts for 21% of revenue. These products are well entrenched with customers and provide reliable, if slow, cash flow increases.

The other two divisions -- pharmaceuticals and medical devices -- may be less well known to the average investor. Because the company has deep pockets, it can buy up companies or patents that present powerful future earnings potential. Though these two, especially pharmaceuticals, can be hit or miss, they provide a modicum of growth potential for investors -- particularly pharmaceuticals, which delivered almost 11% revenue growth last quarter.

When it comes to the dividend, there's a lot to like. Remember when I said Johnson & Johnson had only returned 4% per year since 2002? The blue line below represents that figure. But when we add in the effect of the company's dividend, the story -- represented by the orange line -- changes quite a bit. 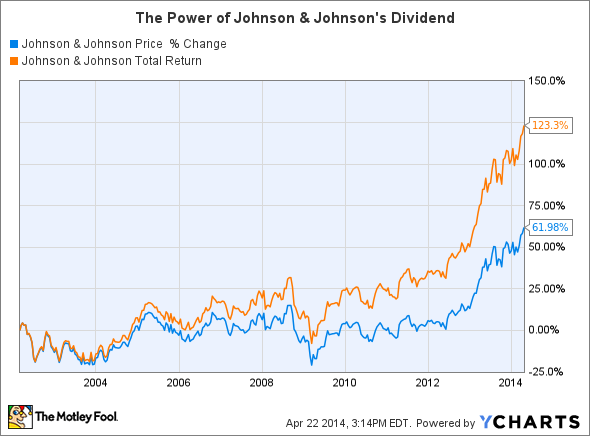 With this new figure, the stock and its dividend delivered average annual returns of almost 7%, a much more respectable return for such a solid investment.

Even more important moving forward, the company has raised its dividend for 51 consecutive years. Currently, it uses a little over half of its free cash flow to pay out its 2.7% yield. That means there's tons of room for growth in the dividend for years to come.

Sure, Johnson & Johnson might not be the most exciting stock to buy and hold, but it may be one of the safest, most profitable ones.