Full-service restaurant chains are going fast-casual while fast-food joints are discovering the joys of serving breakfast, but Bravo Brio Restaurant Group (NASDAQ: BBRG) may have discovered the biggest untapped market yet: brunch, that odd holdover of British custom that resides in the netherworld between breakfast and lunch.

Seemingly forgotten by any chain restaurant before now, since the industry prefers to neatly break down meals into more traditional dayparts of breakfast, lunch, and dinner, Bravo Brio will bravely go where too few fear to tread. Whereas Taco Bell locked up the "fourth meal" spot, brazenly pandering to the bar-closing crowd suffering from a bad case of the munchies, Bravo Brio is taking on the more refined midmorning meal.

Earlier this month, the upscale casual-dining Italian eatery unveiled a weekend menu that begins serving upon the restaurant's opening and runs until 3 p.m. It features omelets, eggs Benedict, hash, and even a berries-and-cream French toast, made from ingredients that include cherrywood smoked ham, homemade biscuits, Fontanini turkey sausage, cage-free eggs, and more.

Like much of the rest of the casual-dining segment, sales for Bravo Brio have been sluggish, with revenues falling 5% in the fourth quarter of 2013 as same-store sales slid 1.4%, continuing a year-long slide. The full year's numbers weren't much better, as sales barely inched 0.5% higher while comps came in 2.8% below 2012's results. 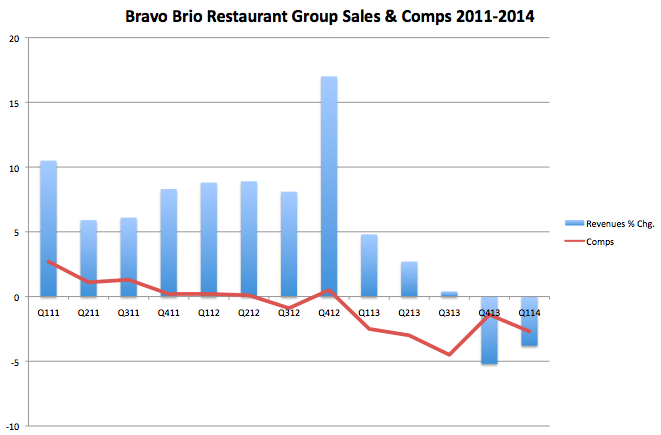 Bravo Brio announced back in February that its brunch menu would be part of a broader effort to turn things around, one that would bring in lighter fare and happy hour programs. With winter's harsh weather having broken, the company believes the changes will gain traction because sales at restaurants in warm-weather locations like Florida and Las Vegas are seeing positive guest count trends.

Essentially, the new menus are following baseball great Wee Willie Keeler's motto of "Hit 'em where they ain't." If everyone's racing to breakfast, target diners who perhaps like to sleep in a bit on Saturday and Sunday and are looking to grab a light bite after the sun's already up.

The risk, of course, is that there might not be much demand for the lighter fare, particularly since most of its restaurants are in malls and shopping centers. Is this really an untapped niche in need of exploitation or just a gimmick to stand out from the rest?

The key to reversing slack sales will be increasing foot traffic, so it's easing back on opening new restaurants -- it will cut the ribbon at just six stores in 2014 compared to eight last year -- so that it can focus on growing those guest counts. But it may be more at the mercy of the sputtering economy than of the time of day it begins serving food.

With Bravo Brio's little debt, a clean balance sheet, and perhaps a way to stand out from all those other casual-dining concepts clamoring for attention, the 20% discount shares are trading at compared to their 52-week high might make the restaurant group worth discussing over brunch.