Rupert Hargreaves
(RupertHargreav)
Author Bio
Rupert has been writing for the Motley Fool since December 2012. He primarily covers tobacco and resource companies with a passion for value-oriented investments. Follow @ruperthargreav1 .

ConocoPhillips (NYSE:COP) is one of the world's largest publicly traded oil exploration and production companies and is around three times the size of peer Hess (NYSE:HES).

However, during the space of the last five years Hess' market capitalization has grown 60%, and the company's diluted normalized EPS have jumped 173%. Over the same period, Conoco has only managed EPS growth of 40%.

So, as Hess' profits surge and the company's market capitalization chases ConocoPhillips', which company's shares are a better for investors looking for both income and growth?

One thing that immediately stands out about Hess is the company's plans for growth and the favorable mix of assets the company has available to it .

For example, Hess' management is targeting production growth of 5% to 8% annually through 2017, most of which is expected to be liquids. Indeed, 80% of Hess' reserves are liquids based, an industry-leading oil linked asset base.

In comparison, ConocoPhillips' reserves are only 62% liquids. A higher percentage of liquids usually means higher profits as oil is more lucrative than gas to produce and sell.

Still, Conoco is targeting five-year production growth of 3% to 5% per annum through 2017 and has earmarked $16 billion of capital to reach this goal. According to management this output growth will come from higher-margin projects. Specifically, ConocoPhillips has allocated 95% of growth capex to develop projects with a profit margin in excess of $30 per barrel of oil equivalent.

However, it seems as if Hess is already outperforming Conoco when it comes to margins. Indeed, Hess has an industry-leading cash margin of $49 per barrel of oil equivalent produced during 2013. Conoco in comparison only reported a margin of $32.3 per BOE, making the company the seventh most profitable E&P player.

Looking at the above figures then, Hess appears to be the most attractive opportunity.

Nevertheless, the future of both companies depends on the success of their North American development programs.

North America is set to be a key battleground for growth during the next few years and Hess is powering ahead in the Bakken, targeting output of 150,000 barrels of oil equivalent per day by 2018 as well as becoming free cash flow positive by 2015.

Key to growth
Meanwhile, key to Conoco's growth is the company's presence within the Eagle Ford, where the company is the lowest cost and highest return operator within the region as seen in the chart below: 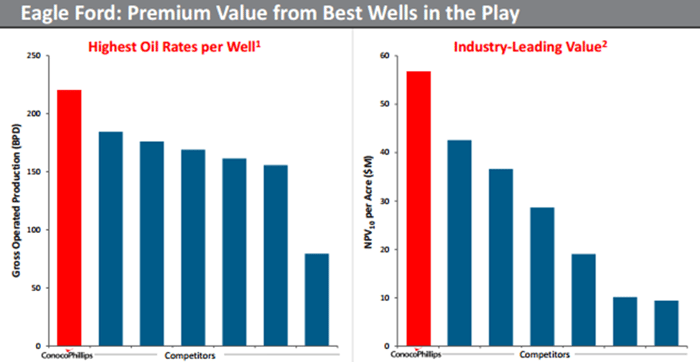 Conoco plans to increase its resources by nearly 40% within the Eagle Ford region as part of its growth strategy, targeting output of 250,000 barrels of oil per day by 2017. And with leading production margins it is likely that Conoco's profits will surge as a result of this output expansion.

Conoco is not only targeting growth within the Eagle Ford, the company also plans to develop several Gulf of Mexico properties as well as offshore prospects in Australia, Angola, and Senegal. Conventional and unconventional plays are also being developed within Norway, Indonesia, Poland, and Colombia.

The company has projects already under way in the U.S., Canada, Malaysia, Australia, the United Kingdom, and the Norwegian North Sea.

Income
All in all then, both Conoco and Hess are primed for growth, but with higher profit margins per BOE extracted and a larger reserve of liquids Hess looks to be the better choice for growth.

That being said, one thing that needs to be taken into account is ConocoPhillips' dividend yield, which currently stands at 3.7% compared to Hess' minimal 1.1% yield. Of course, we need to take into account the fact that Hess' payout has been hiked 150% during the past year, which implies that further payout increases are in the cards in the future, although Conoco's payout is also expected to grow at a double-digit clip for the next few years; it's a tough call between the two.

But Hess offers something Conoco does not; share buybacks. During the 12 months ending December 2013 Hess spent $1.4 billion repurchasing stock, around $4.60 per share. If we add in Hess' $0.70 per share dividend paid during the year, the company returned $5.30 per share to investors during 2013, or in other words a yield of just under 6%.

Foolish summary
Overall then, it would appear as if Hess is the better company for investors seeking both income and growth. Hess has a much stronger plan for growth in place than ConocoPhillips, and the company is returning cash to investors equivalent to a yield of 6% per annum.

ConocoPhillips vs. Hess: Which Should You Pick for Income and Growth? @themotleyfool #stocks $HES $COP Next Article
Current