Last year, the U.S. government put a block of Powder River Basin coal land up for bid. It got no bids -- zero, nada. India recently put up three coal blocks with 500 million tonnes of reserves, much of which was steel making coal, up for auction and got 36 applications. No wonder iron ore miners like Vale (NYSE:VALE) and Rio Tinto (NYSE:RIO) are excited about the emergence of India.

Smaller or bigger?
The big story in Asia has been China for many years -- and for good reason. However, that doesn't make it the only story worth watching. For example, one of iron ore miner Vale's big talking points is that economically developed South Korea uses around twice as much steel per GDP as China. However, India uses vastly less than even China. What Vale's data points out is that China's steel demand growth, which is exciting in its own right, has much less room to run than India's. And the obvious demand for metallurgical coal mines in India shows just how notable an opportunity supplying the Indian steel industry is. 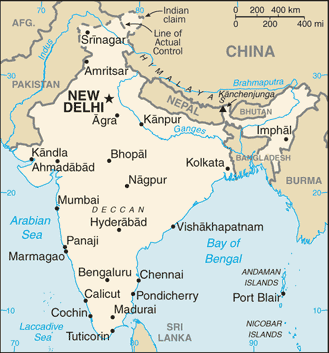 Backing up Vale's assessment are some interesting demographic comparisons provided by fellow iron ore miner Rio Tinto. China's population is projected to grow around 0.3% annually between 2010 and 2030. India's population is expected to grow 1% a year. That may not look like a big difference, but when you compound those numbers it becomes huge.

That's not the only big difference, either. Rio Tinto is projecting India's urban population to grow 15% faster than China's over that span, too. Building cities requires steel, and that means both met coal and iron ore demand. Rio Tinto's demographic helps explain why Vale expects seaborn iron ore demand to increase 35% between 2012 and 2020.

Getting ready
Vale and Rio Tinto's positive iron ore outlook also helps explain why the pair is still investing in the space despite recent oversupply issues. For example, Vale has plans to spend over $4.3 billion on iron ore growth projects in 2014. It's also spending more than $400 million on its iron ore distribution network this year.

That points out a key difference between Vale and Rio Tinto. Vale's mines are located largely in South America while Rio Tinto has major operations in Australia. Rio Tinto is looking to close that gap as best it can.

Rio Tinto, meanwhile, has been focusing on increasing the efficiency of its mining operations. That's included expansions at existing mines, which tend to be lower cost projects that have more defined return profiles. But it also means adding technology like autonomous trucks, which Rio Tinto projects will increase truck utilization by up to 15%.

Is now the time?
Shares of Rio Tinto and Vale are both well below their peaks reached in mid-2008. Industrywide overcapacity and commodity price weakness are largely to blame. But the demographic trends in China and India, and the demand that will eventually bring, suggests this isn't a long-term problem. 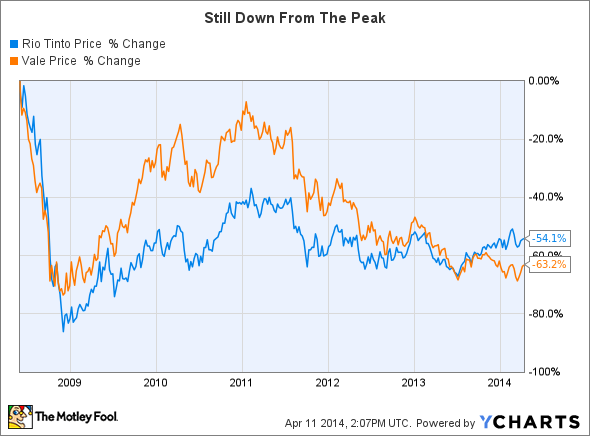 For example, Vale notes that the price of iron ore has been trending into a narrower, and lower, range. But it doesn't see prices falling below $100 a ton. That will give big players like Rio Tinto and Vale an advantage over smaller players that don't have the same access to funding or the same scale of operations.

Vale and Rio Tinto are both solid miners with large iron ore operations. And they each mine for met coal and copper, too, so they have more to sell to India (and China) than just iron ore. Overall, as mining markets mature and demand from the next big emerging nation starts to take shape, it's definitely worth your time to dig a little deeper into this pair of diversified miners.