Oil from Canada's oil sands is dirtier than most other oil varieties produced around the globe. That's one of the big reasons why environmentalists don't want to see more of it being produced. It's also one of the big reasons why there is such a big protest over Transcanada's (NYSE:TRP) Keystone XL Pipeline. There's just one problem with this reason to protest: Environmentalists have been so busy protesting that they've missed the fact that the oil sands are actually getting a lot cleaner.

In comparing the life-cycle emissions of crude oil varieties, the common comparison is often referred to as the "well-to-wheels," which measures the full life cycle greenhouse gas emissions. The average crude oil imported into the U.S. has 102 grams of carbon emissions per unit of energy adjusted for the energy economy ratio. The problem with the oil sands is that this oil has 107 grams of carbon emissions, putting it at the higher end of America's range of commonly imported crude-oil varieties. To see more about this comparison, the Alberta Government has an easy to understand comparison chart (link opens a PDF).

One of the reasons the environmental footprint of oil-sands production is high is due to the fact that companies like ConocoPhillips (NYSE:COP) burn natural gas to produce steam. This steam is then pumped underground to warm the thick oil so that it can be produced though a well. The more steam that ConocoPhillips uses requires more natural gas and results in higher emissions. In order to improve this steam-to-oil ratio ConocoPhillips has installed a number of new technologies to its projects in the oil sands. These technologies are pushing big reductions in greenhouse gas emissions for ConocoPhillips as the following slide details. 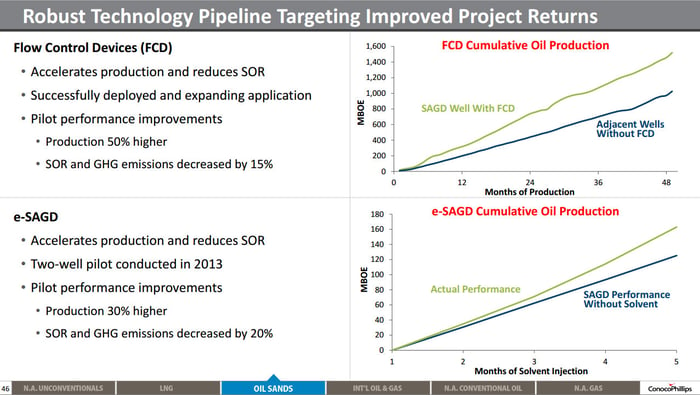 The two technologies detailed on the above slide are both clearly having a big impact for ConocoPhillips' emissions. The first technology, Flow Control Devices, is increasing the company's production by 50% while also lowering the steam-to-oil ratio and greenhouse-gas emissions by 15%. Meanwhile, e-SAGD is pushing production higher by 30% while decreasing emissions by 20%. Beyond these two technologies ConocoPhillips and its partners in the region have a robust pipeline of technology projects designed to improve production while decreasing the carbon footprint. ConocoPhillips is far from the only company focused on reducing its oil sands carbon footprint. 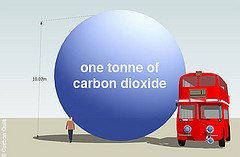 Carbon capture and storage heats up
The other big shift many environmentalists missed while protesting is that the industry is working on a number of carbon capture and storage projects. The Quest carbon capture and storage project is in the middle of being completed and should start up late next year. It's expected to reduce emissions by one million tonnes of carbon dioxide per year. That's the equivalent of taking 175,000 cars off the road. The project is costing the industry $1.35 billion and is expected to bring the carbon footprint of heavy Canadian oil produced through the project to the same level as conventional sources of oil like what's imported from OPEC.

Quest is just one of a number of carbon capture and storage projects the industry is working on in order to mitigate the climate-change impact of the oil that would flow through TransCanada's proposed Keystone XL pipeline. These projects will capture carbon and use it to produce more conventional oil from depleted wells through enhanced oil recovery. In addition to that others are testing the use of that carbon to grow algae as well as in other commercial activities like beverages.

Key takeaway
The energy industry has undertaken a number of initiatives to clean up the carbon footprint of the oil sands. Unfortunately, some environmentalists are too busy protesting TransCanada's Keystone XL pipeline to see the rapid progress the industry is making in response to their criticism. Instead of helping our nation get off our addiction to OPEC's oil, too many are standing in the way as progress really is being made.