The Dow Jones Industrial Average (DJINDICES:^DJI) is pushing hard to reverse last week's woes this Monday morning, and one key driver of the index's gain is world's largest drugmaker Pfizer (NYSE:PFE),which is again taking aim at a new acquisition target.

AstraZeneca (NYSE:AZN) is the latest company to catch Pfizer's eye, and the two companies have been circling each other since the start of the year. Pfizer first offered $76.62 per AstraZeneca share in January. That offer -- and the latest Pfizer proposal made over the weekend -- have so far been rebuffed, but market watchers are now fairly certain that the deal will get done in due time. AstraZeneca shares were trading 13% higher as noon EDT approached, close to $78, while. Pfizer shareholders were sitting on a nearly 3% gain.

You probably know a bit about Pfizer, including its recent history of blockbuster buyouts -- since the start of the 21st century, Pfizer has acquired Warner-Lambert, Pharmacia, and Wyeth for a combined (nominal) purchase price of $218 billion, which is more than its current market cap! Any AstraZeneca buyout would cost Pfizer more than $100 billion, which would mean (if the deal goes through) Pfizer will have spent roughly $320 billion (or more) on acquisitions since the turn of the century, but only $101 billion on research and development.

But there are probably quite a few things you don't know about Pfizer, which has been the driving force of the modern pharmaceutical industry since it helped to create it during and immediately following World War II.

Pfizer's first major drug was penicillin, the legendary antibiotic first commercialized in 1942, the same year Pfizer went public. Pfizer's IPO raised $5.9 million at a market cap of $12.4 million for the fledgling drug concern, granting the company a P/E of 10.9. Pfizer used its IPO windfall to build out manufacturing capacity for penicillin, and by D-Day the company was the Allies' largest supplier of antibiotics.

Before it was a drugmaker, Pfizer was a leader in chemical manufacturing. Formed as Charles Pfizer & Co. in 1849, the company remained a family owned partnership for half a century before incorporating at a valuation of $2 million. The first half of the 20th century wasn't particularly lucrative for Pfizer shareholders -- at least not in share-price terms -- as its annualized share-price growth rate was only 4.4% from 1900 to 1942. However, since 1942, Pfizer's shares have grown at an annualized rate of 14.4%. That trounces the Dow itself, which has only grown at a rate of 7.5% per year since 1942.

Pfizer was forced to change its business tactics after the end of the war, as a flood of penicillin manufacturing pushed prices to the floor. In 1950, the FDA approved Pfizer's first drug developed in-house. Terramycin, which was also the first post-penicillin antibiotic, was paired with an innovative new sales strategy that would lead to the birth of the modern pharmaceutical industry. Today, the entire industry operates on sales principles first developed at Pfizer for Terramycin, with one major update.

When Pfizer's Viagra was approved for sale in 1998, it launched a new era of pharmaceutical marketing that has been the standard ever since. Those full-page advertisements that promote drugs more as a lifestyle enhancement than as a health necessity are Viagra's legacy, as is the celebrity drug pitchman, who can now be found touting everything from the little blue erectile-dysfunction pills to cholesterol reduction drugs. Over 20 million American men have used Viagra since 1998, but virtually every American is now familiar with drugs as a lifestyle. Thanks, Pfizer!

Pfizer also holds other important ties to the "lifestyle" drug category now that it owns G.D. Searle, which was the first drugmaker to gain approval for oral contraceptive pills in 1961. Since "the pill" was approved, American birthrates have plunged, from 3.65 children per woman to only 1.84 children per woman -- a level below the 2.1 children per woman necessary to sustain population growth. 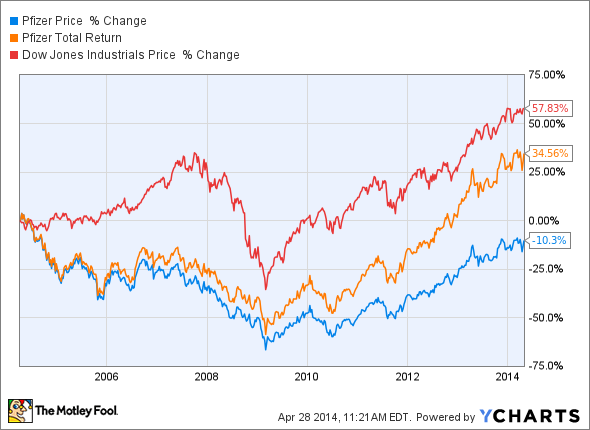 Pfizer joined the Dow in 2004, and since then it has underperformed the index, even when dividend reinvestment is taken into account. Over the past decade, the Dow has gained 58%, but Pfizer, with its dividends included, has only grown 35%. That's still better than Pfizer's return without dividends -- minus reinvestment, the world's largest drugmaker has actually lost 10% of its value since 2004!