The market has shown no mercy for Twitter (NYSE:TWTR) shares headed into tomorrow's report. The social site famous for its 140-character tweets has been one of the unfortunate tech growth stocks to get sold off in recent weeks. And now with earnings due tomorrow, some investors seem to be unloading shares one more time. Shares are trading 4% lower at the time of this writing and down about 13% in the past week. From its all-time high last December, shares are down a whopping 45%.

The negative pressure from the broader-market tech sell-off combined with investor concern for Twitter's slowing user growth means that Twitter will have to deliver nicely tomorrow to renew investor interest in the stock. While popular metrics like revenue and earnings per share will certainly be essential, one metric will likely trump everything else in importance: monthly active user growth.

Why user growth is key
Twitter put up a big top-line number in Q4. Revenue was up 116% from the year-ago quarter. Analysts expected year-over-year growth of 95%. Solid top-line performance carried down to the bottom line, where Twitter reported EPS of $0.02 compared to expectations for a loss of $0.02 per share. Despite the nice numbers, Twitter investors sold off shares after the report.

Why is the market so discontent with Twitter's growth prospects if revenue beat analyst expectations in its fourth-quarter earnings report? Slowing user growth. At the end of the day, revenue growth will eventually be limited if the company can't add significant users.

Just how bad is Twitter's slowing user growth? On a year-over-year basis, Q4 monthly active users were up 30%. While that sounds nice, that's a considerable sequential decline in user growth rates from previous quarters. In Q3, the rate was 39%. But the best way to visualize the slowing growth is to look at Twitter's declining sequential growth rates in monthly active users. 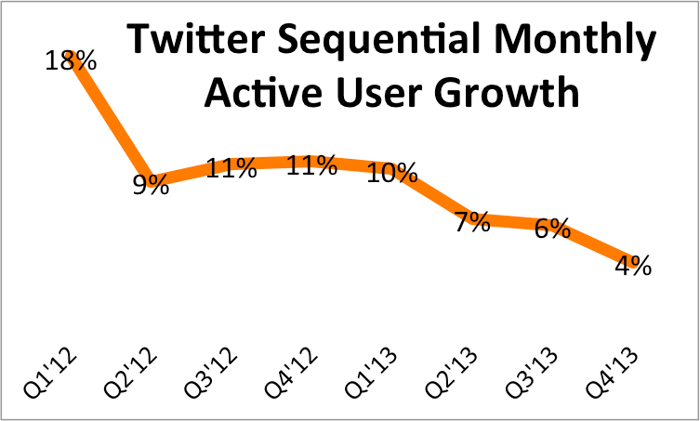 So what sort of monthly active user growth should investors expect from Twitter tomorrow? To give investors confidence in the social site's growth trajectory in light of its rosy valuation, investors should hope to see the company at least maintain last quarter's weaker-than-expected sequential growth rate. That means investors should expect Twitter to post 251 million or more users. That would be a year-over-year gain of 47 million users, or 23%.

For revenue and EPS, the consensus analyst estimate for Twitter tomorrow is $241 million and a loss of $0.03 per share, respectively.