In what has become a not-so-funny comedy of errors, Bank of America (NYSE:BAC) today announced that due to an incorrect capital calculation it would suspend its planned dividend and share buyback program announced just a few short weeks ago.

According to the bank, there was a mistake in the capital allocation calculations related to some complex financial instruments inherited from the acquisition of Merrill Lynch in 2009.

The news sent ripples through the financial sector

The news sent the bank's stock down by 5.8% in Monday morning trading, a notable counter to the broader markets. The Dow Jones Industrial Average (DJINDICES:^DJI) was up 49 points in early afternoon trading.

The news out of Charlotte this morning sent other financial stocks lower, including Dow components JPMorgan Chase (NYSE:JPM) and Goldman Sachs (NYSE:GS)by 1.1% and 2.1%, respectively.

A little background
Back in March, the Federal Reserve released its Comprehensive Capital Analysis and Review of the nation's largest banks. Banks must pass this analysis, an offshoot of the Dodd-Frank requirement for annual stress testing of large U.S. banks, before they can pay out dividends or buy back shares.

The thinking here is that regulators should have the final say on whether these institutions have enough capital on the books to protect the financial system from another crisis. In general, more capital means safer banks, and that means a safer financial system.

Banks must prepare their own stress tests and release those to the public. The Fed then conducts its own independent tests to confirm the banks are on the right track. This year, many banks were far more optimistic in their projections than the Fed. That said, all but one of the banks passed. (Citigroup was the outlier. You can hear about that here.)

Passing was significant for both JPMorgan and Goldman Sachs, as both both passed the 2013 test with a conditional exception. The Federal Reserve, in essence, told the banks then that the had passed, but next time they needed to do a better job.

Bank of America also passed this year's stress tests, and the Fed approved the initial $4 billion share buyback authorization and dividend increase from $0.01 per share to $0.05 per share.

What does this mean for the long term?

The suspension of that plan today, as demanded by the Fed, does not necessarily mean that Bank of America's dividend and buyback are dead in the water. It simply means the buyback and dividend increase will be on hold while the bank finalizes the corrected capital calculations and gets reapproval from the Fed.

Why? Because the error in the capital calculation is very minor in the grand scheme of a $2+ trillion bank.

According the Bank of America press release issued this morning, the change in the capital levels are actually quite small -- 0.05% small. Banks measure their capital with a handful of complex ratios that are outside the scope of this article, but the impact to all of these ratios only amounted to five to 21 basis points, depending on which ratio you choose.

Today's announcement, while absolutely embarrassing for the company, is simply not a major long-term event. The Fed will likely reapprove the bank's capital plan and move on to other, more significant concerns.

And yet, even though this single event will not be a pivotal moment in Bank of America's history -- and to be clear, I think it is likely a market overreaction to send the stock down 5% -- it does raise eyebrows.

This is yet another in a long and worrisome series of mishaps and embarrassments for the bank. CEO Brian Moynihan began a long-term strategic shift in the company as soon as he took the helm in 2010. He simplified operations, sold off unprofitable or risky businesses, and refocused on old-school banking fundamentals. The plan, simply put, was to batten down the hatches, survive the storm, and rebuild the bank into what it was always supposed to be -- the bank of America.

The plan, despite the myriad public relation snafus, has worked. The stock price reflects that, particularly since the initiatives took hold in early 2012. 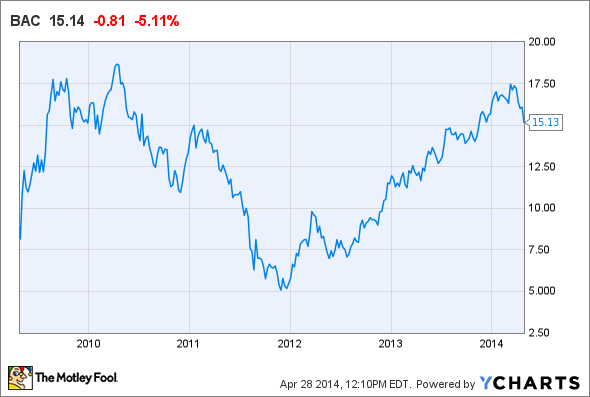 Bank of America's core lending business is highly valuable; it brings in billions of dollars and successfully serves the needs of thousands upon thousands of customers. The stock is up over 300% since the end of 2011.

But questions still remain. What does it say about the bank's management depth and financial controls if this error was able to elude detection until after both the Dodd-Frank and CCAR stress tests, as well as a quarterly earnings release? Are you comfortable investing your dollars into a company that seems to be doing everything right, but still getting significant details wrong?

Keep it classy and let me know what you think in the comments below.