Chalk up the demise of another brand extension. Teen fashion retailer Wet Seal (NASDAQ: WTSL) has announced that it's abandoning its more adult-oriented Arden B stores, with plans to close 31 of the 54 stores over the next two years and transition the remaining to its namesake stores. With the move, Wet Seal joins a long line of retailers that have found that their plans for niche marketing didn't work out as intended.

Abercrobmie & Fitch began closing down its "cheeky Australian cousin" Gilly Hicks concept stores last year, which itself followed the killing off of the adult Ruehl No. 925 brand in 2009. bebe stores changed its sports division to the nearly unpronounceable Ph8 before switching it to the equally inscrutable 2b bebe, only to say last year it was just going to fold the whole thing back into its eponymous brand. Similarly, Pacific Sunwear and American Eagle Outfitters were also forced to shed their brand extensions.

Wet Seal, like many of its peers, has had to face changing consumer tastes that are increasingly heading toward trendier shops such as Forever 21, Century 21, and Zara. But while focusing on its teen to young adult demographic is a necessary move, consumers haven't exactly shown a preference for Wet Seal, either.

Consolidated net sales at Wet Seal fell 23% in the fourth quarter of 2013 that ended on Feb. 1, driven lower primarily by plunging sales at Arden B that were down 43% from the year-ago period. Comparables, however, were also disastrous across the chain, with Wet Seal stores witnessing a 15% drop, while they were down 25% at Arden B. The outlook for 2014 isn't any better, with management expecting comparable-store sales to be in the negative mid to high teens.

Analysts contend that Wet Seal's best hope for survival is to focus on the 16-to-23-year-old consumer, who is still benefiting from being able to spend Mom's money, as compared to their older 20-something siblings, whose budgets are more pinched. Mix in, however, the cheap, trendier, and disposable fashions featured by the likes of H&M, and it's clear teen retailers still have their work cut out for them.

Yet it explains why Abercrombie is remaking its Hollister division as a fast-fashion trend and why Sears Holdings is even installing new, hip Now + Here store-in-store boutiques that cater to that sensibility. 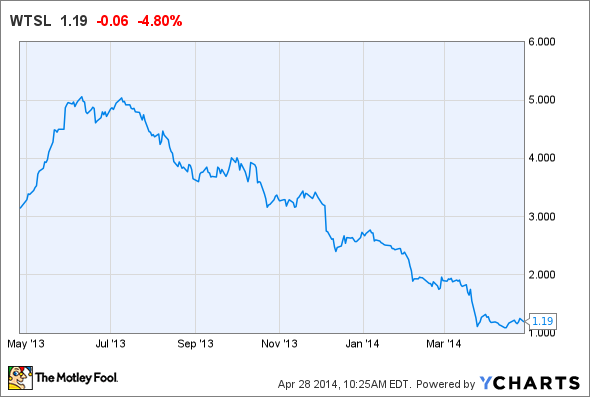 Wet Seal's problems are further complicated by the tumult in its C-suite, installing a new CEO as activist investors turned out four of its seven directors. The changes, however, haven't proved effective yet, and its stock remains on a sustained downward trajectory, having lost more than three-quarters of its value from last summer.

There's nothing to suggest Wet Seal's latest effort will do anything different except perhaps stanch the bleeding Arden B has caused. Investors would do well to pass on this teen retailer until it can show how it can quickly turn the corner and keep up with its trendier rivals.