Headed into Twitter's (NYSE:TWTR) first-quarter earnings, the Street had big expectations. Unfortunately, the company failed to deliver the results needed to please the Street. Shares fell more than 10% in after hours trading when the results were released. While Twitter did post some impressive numbers, slower than expected growth took center stage... again. But a closer look at the overall results from Twitter shows that the Street may have overreacted.

The results
Top- and bottom-line results both came in above the consensus analyst estimate. Analysts expected Twitter to report revenue of about $241.5 million and a loss of $0.03 per share. Instead, Twitter posted revenue of $250 million and non-GAAP EPS just over zero cents.

But beating the consensus analyst estimate on revenue and EPS wasn't enough to soothe investor concern for the social network's 6% sequential user growth. Though that rate is an acceleration from last quarter, the growth sits notably below the rates achieved in other recent quarters. 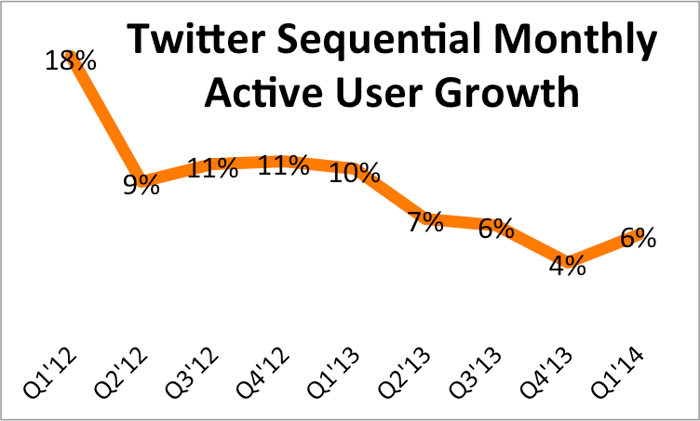 Data used in this chart is retrieved from SEC filings for quarters shown and Twitter's S-1 filing.

Overreaction?
But is the Street's concern merited? Twitter is firing on all cylinders on every other important metric. Its ad revenue per 1,000 timeline views soared 96%, marking the fourth quarterly acceleration for the metric. Further, the rate was well above Q4's 76% year-over-year growth. Engagement also came in nicely, showing the first sequential gain (albeit only by 1 timeline view) since the second quarter of 2013. And is the quarter's user growth really that bad? Looking at user growth with the glass half full, this is the first uptick in sequential growth rates in six quarters.

In a nod to Mr. Market's moodiness, the stock admittedly sports a pricey valuation -- a factor that gives investors a right to have big expectations for the company. With a market capitalization of about $22 billion and trailing-12-month revenue of just $800 million, Twitter's price-to-sales ratio of 27.5 even outdoes the Facebook's bullish price-to-sales metric.

Still, the overall results were excellent. Twitter beat my expectations on every front. And the meaningful uptick in Twitter's sequential user growth is good news for investors. While the user growth may be smaller than some investors had hoped, it's to early to judge the company's efforts to reinvigorate user growth to more meaningful levels.

What should investors do? Shareholders should hold on to the stock. There's no reason to have less confidence in the stock after the report. Investors who had Twitter on their radar may want to dig deeper to see if the stock is worth taking a small position in at a lower price.