Deja-vu all over again! Extra Space Storage, (NYSE:EXR) just announced outstanding results for the quarter ending March 31, 2014. This is the 14th consecutive quarter that this leading self-storage REIT has achieved double-digit growth in funds from operations, or FFO. FFO is a metric used by REITs to adjust net income to better reflect actual cash flow from operations. Extra Space is the second largest self-storage REIT with a market cap of approximately $6 billion.

Here are a few highlights from the April 29, 2014 earnings conference call:

·       Adjusted FFO growth of 24% compared to the previous quarter

·       Over 9% increase in same store net operating income, or NOI, for the quarter

Putting that occupancy into perspective, CEO Spencer Kirk shared that for Extra Space the top achievable occupancy would be approximately 94%. This is due to a couple of factors:

1.     In a typical month there is an average 6%-7% customer turnover. There are seasonal variations as well. This is an industry wide trend, not unique to Extra Space.

2.     However, Extra Space Storage utilizes an automated revenue management system.  This system crunches various inputs including: the occupancy of the local market, information about an individual customer, and the number/type of vacant units at a given facility.

This is a major factor in Extra Space achieving the consistent growth in FFO. Rates are automatically increased and/or move-in incentives are decreased as market conditions become more favorable. A slightly lower occupancy percentage at much higher rates often provides greater revenue.

A rising tide lifts all boats
CEO Kirk identified two industry tailwinds in a Dec. 11, 2013 interview that are helping the performance of the entire self-storage REIT sector. He reiterated these two trends during the earnings conference call:

1.     There is virtually no new supply of self-storage facilities being constructed. He does not see this changing significantly in the next two to four years.

2.     The Internet and technology advantage. In the old days customers used the yellow pages or just drove up. Today the vast majority use computers and mobile devices to begin their search for storage space. Of course, there are still some drive-ups as well.

Only the largest operators of self-storage have the financial strength necessary to pay for Internet advertising, SEO, staff call centers, and fund websites designed to create a customer experience similar to any other retail online purchase. 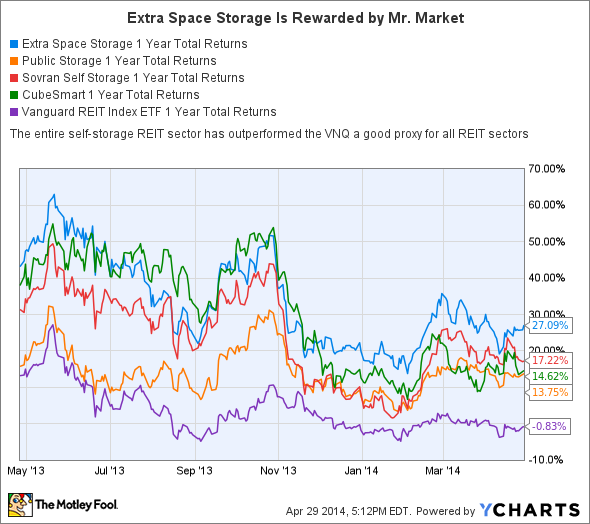 A runway for future acquisitions
During the quarter ending December 2013 Extra Space Storage acquired 50 properties for $310 million. The recent quarter ending in March was strong as well, with the acquisition of 21 properties for about $250 million. Comparisons by quarter will always be a bit lumpy due to the complexities inherent in large real estate transactions. However, subsequent to the end of the March quarter, Extra Space has already closed on four properties for $61 million, and currently has another $39 million under contract.

During the conference call Extra Space management explained its current FFO projections for 2014 only assumes $150 million for acquisitions during the last six months of the year. This appears to be a fairly conservative assumption.

CEO Kirk pointed out that there are approximately 20,000 investment grade self-storage facilities in the U.S. not currently owned by public companies. This pool of properties represents a runway for significant growth for this entire sector.

When does the rest of the sector report earnings?
Public Storage, Inc. (NYSE:PSA) with its $30 billion market cap is the industry giant. It has the highest investment grade of any REIT, and is currently paying a dividend yielding 5.6%. Public Storage is scheduled to report earnings on May 2, 2014.

Sovran Self Storage, Inc. (NYSE:LSI) brands its facilities under the Uncle Bob self-storage flag. Sovran sports a market cap of $2.5 billion, and is currently paying out a 3.6% dividend yield. The company is scheduled to report earnings on May 1, 2013.

CubeSmart (NYSE:CUBE) currently has a market cap of $2.6 billion and is currently paying out a dividend yielding just over 2.8%. CubeSmart is scheduled to report earnings on May 2, 2014.

Investor Takeaway
Extra Space Storage just announced another great quarter. The positive macro trends of a severely limited supply of self-storage facilities projected to be built during the next few years; combined with all the Internet and technology advantages, bode well for this entire REIT sector. Interested investors might be well served to do some research prior to these upcoming conference calls. This sector certainly has room for more than one winner!

What's Better Than 1 Great Quarter of Earnings? How About 14 in a Row? @themotleyfool #stocks $CUBE $PSA $EXR $LSI Next Article
Current