Following an earnings miss last Thursday, shares of JetBlue Airways Corporation (NASDAQ:JBLU) dipped below the $8 line for the first time in almost six months. This has created a great buying opportunity for long-term investors. 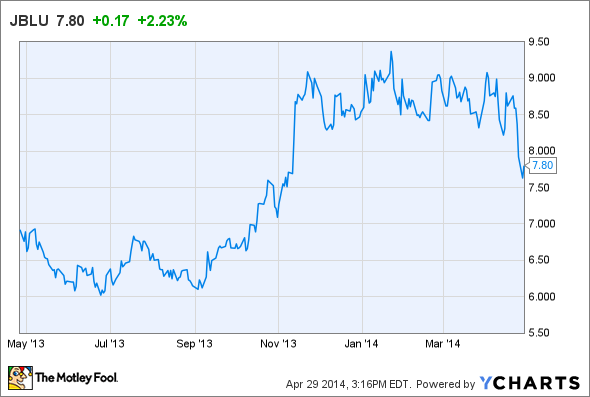 JetBlue has several key margin growth drivers ahead. Most notably, JetBlue's Mint premium service will begin rolling out in June. This will help it compete better with American Airlines (NASDAQ:AAL), United Continental (NASDAQ:UAL), and Delta Air Lines (NYSE:DAL) in the lucrative transcontinental market. The result will be faster earnings growth -- and, ultimately, market-beating stock performance.

Setting the table for earnings growth
While JetBlue's earnings declined last quarter, this was caused by two unusual factors. First, JetBlue canceled more than 4,000 flights due to a series of snowstorms that hit JetBlue's top two markets: New York and Boston. JetBlue estimated that these cancellations reduced operating income by $35 million.

Second, JetBlue posted a big unit revenue decline last month due to the shift of Easter and Passover from March to April. It will see a corresponding benefit in Q2, as April unit revenue is on pace to rise by 9.5%-10.5%. Thus, the Q1 earnings decline is not really a sign of weak performance.

In fact, revenue growth should remain quite robust going forward. The strong April result may be distorted by the Easter/Passover shift, but JetBlue currently expects mid-single-digit unit revenue growth in May, when there are no unusual calendar changes. Combine that with projected 5.5%-7.5% capacity growth, and JetBlue should post double-digit revenue growth.

Some investors are instead concerned about rising unit costs at JetBlue. Indeed, JetBlue has projected that unit costs will rise 3.5%-5.5% this quarter. However, unit costs are expected to rise just 2%-4% for the full year, implying that cost growth will rapidly decelerate in the second half of 2014.

Three upcoming margin/earnings catalysts
Looking ahead, JetBlue has three important catalysts for margin growth and earnings growth. The most important is the introduction of JetBlue's new Mint premium service on long-haul routes from JFK Airport in New York to Los Angeles and San Francisco.

American Airlines, United Continental, and Delta Air Lines get very high average fares on these routes due to the heavy demand for premium seating, particularly among business travelers. All three legacy carriers either have or will soon have flatbed seats available on all flights for these two routes. By contrast, JetBlue's average fares have been much lower due to the absence of premium seating.

JetBlue's new Mint flights will have 16 flatbed seats, including four semi-private suites. These seats will command much higher fares. Moreover, thanks to the efficiency of the Airbus A321 compared to JetBlue's other planes, the introduction of a premium cabin won't put pressure on unit costs. The rollout of Mint service over the next year should thus be a big boon for margins.

JetBlue's second margin growth driver is on the cost side. Last fall, the company deferred all of its remaining orders for Embraer (NYSE: ERJ) E-190 aircraft until 2020 and thereafter, while ordering numerous additional Airbus A321s. The A321 has much lower unit costs than the E-190, so this mix shift should help reduce JetBlue's unit costs.

JetBlue is also turning to new technology to reduce fuel consumption. All of its new Airbus aircraft will come with winglet devices called Sharklets that reduce fuel consumption by 3% or so. JetBlue is also retrofitting over 100 aircraft in its fleet with Sharklets. Lastly, JetBlue has placed orders for 60 A320neo/A321neo aircraft, which will offer a double-digit reduction in fuel burn, primarily through more efficient engines.

To free up capacity for these routes, JetBlue will cut underperforming flights. For example, later this year, it is ending long-haul service from the less-convenient Dulles Airport to Long Beach and Oakland. The new Reagan Airport flights are likely to be far more successful because of that airport's proximity to downtown Washington, D.C., and flight caps that limit competition.

Foolish bottom line
As investors have fallen back in love with mega carriers like Delta, American, and United, JetBlue has often been overlooked. However, the company offers a compelling blend of organic growth and margin expansion.

With shares now trading for less than 12 times expected 2014 earnings, JetBlue is quite cheap in comparison to the company's long-term potential. I scooped up some stock last week, and if the stock gets any cheaper, I will definitely consider increasing my investment.