Poor weather conditions have been quite harsh on the retail industry since most retailers have been posting lackluster results for the holiday season. Also, a shift in the Easter holiday has hampered sales in the quarter. Both of these factors played a crucial role in pulling down the third-quarter results of Coach (NYSE:TPR). The numbers from Coach disappointed investors, so its share price fell.

The results
Coach's revenue dropped 7% from last year's quarter to $1.1 billion to miss analysts' consensus estimate of $1.13 billion. Earnings also plunged 19% from the previous year to clock in at $0.68 per share. However, Coach's earnings came in quite ahead of the estimate of $0.61 per share. The bottom line managed to beat analysts' expectations despite fewer sales and more discounts and promotions during the holiday season.

One of the key reasons for the decline in overall revenue was the North American segment, which has been a drag for quite some time now. With demand declining, Coach posted an 18% fall in revenue from the region and a 21% decline in comparable-store sales. Moreover, this segment generates more than 50% of Coach's total revenue. As a result, weakness in this region is pulling Coach's top line down.

On the other hand, the international segment has been a key growth driver for Coach. Its sales from this region have been growing and the company witnessed growth of 20% over the prior year's quarter. Regions such as China and Japan have been doing extremely well, registering revenue growth of 25% and 10%, respectively.

Fierce competition
However, Coach faces stiff competition from its peers such as Michael Kors (NYSE:CPRI) and Ralph Lauren (NYSE:RL), and it is unable to outperform them. Michael Kors has taken away customers from other players as its fancy handbags and accessories have resonated well with shoppers. This has affected Coach's handbag sales, especially in North America. The chart below shows the quarterly revenue growth of these three players over the last year. 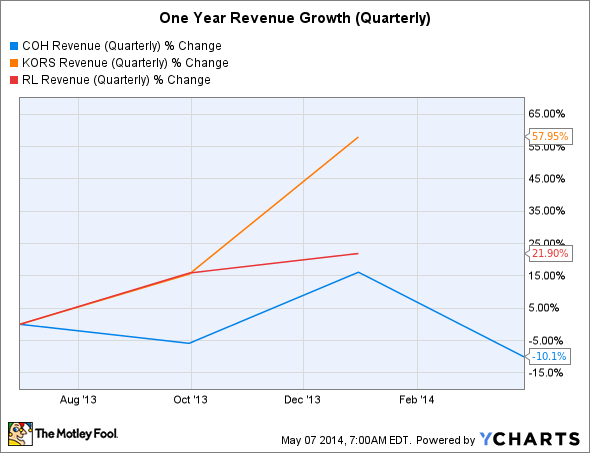 Clearly, Michael Kors has been the best performer of the group with 58% revenue growth over the last year. Coach has been the worst performer with a decline of 10% in quarterly revenue during the same period. This has mainly happened because the retailer has been losing its customers to Kors and similar players.

Michael Kors has been an extraordinary performer since its IPO in December 2012. Its revenue has been growing at a fast pace; in fact, it climbed a whopping 59% in its last quarter from the prior-year quarter. Unlike Coach, the North American market has been one of the key drivers for Kors' performance. Kors' revenue from this region jumped 51%, driven by growth of 24% in comparable-store sales and the addition of 43 new stores during the quarter. Therefore, this shows that the retailer's innovative offerings and designs have won over customers' interests. Also, the company's strategy of keeping in touch with its customers through mails and messages has helped lure shoppers to its stores.

Ralph Lauren has also performed well with revenue growth of 22%. The retailer has ramped up its advertising and its promotion efforts have been instrumental in driving growth. In fact, its last quarter was also a great one as it posted top-line growth of 9% over the year-ago quarter. Both the retail and wholesale segments registered growth of 6% and 14%, respectively, and same-store sales grew 1%. The bottom line surged 11%, clocking in at $2.57 per share. The company has launched a women's Polo line and has made new introductions in the men's segment. These efforts should help the retailer attract more customers. Moreover, Ralph Lauren raised its guidance upward, making investors hopeful about its future.

Reasons for hope
Although Coach is having a tough time with combating competition and attracting customers, it has not given up yet. It is formulating a number of strategies to stage a comeback.

For instance, it has undertaken a brand-transformation strategy which will position it as a global-lifestyle brand. To that end it has ramped up its marketing efforts, remodeled its stores to make them more attractive, and expanded into new product categories apart from womens' handbags.

The retailer has expanded its offerings to include accessories, jewelry, and footwear as well as apparel. This will help the retailer widen its product portfolio beyond handbags. Moreover, it is now focusing on both men and women. In fact, the men's category now makes up 15% of its total revenue.

Additionally, Coach plans to launch a new collection, by the new creative director Stuart Vevers, which will hit the market in September. This new collection should give customers more reasons to visit its stores, which will lead to higher sales.

Key takeaway
Coach is in a tough situation as huge discounts and a highly competitive environment are eating into its top line. Also, factors such as colder weather and the shift in the Easter holiday have been deterrents to its sales. Nonetheless, the company has not lost hope and is taking many measures to overcome the situation. Its brand transformation strategy, new collection, and expansionary efforts look interesting. However, waiting for these efforts to start paying off would be a wise decision.