When it comes to server processors, Intel (INTC -0.82%) is by far the most financially successful. While Intel is well known for having the highest-performing microprocessors in the industry, this isn't strictly true. Indeed, if there is one company out there that builds bigger, hotter, and more powerful processors than Intel does for ultra-high end Unix servers, it's IBM (IBM -0.85%) with its POWER line of microprocessors. With IBM's recent launch of its POWER 8 processors, should Intel be worried?

The power of POWER 8
IBM's POWER 8 is truly a technical tour de force: 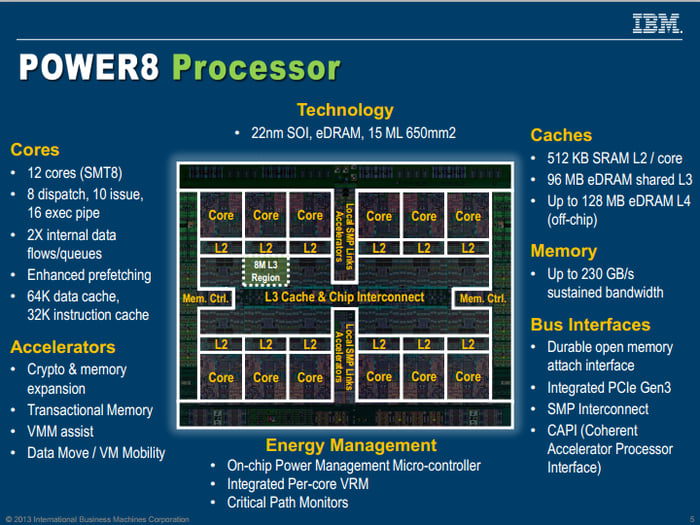 The POWER 8 CPU core is extremely wide, clocks quite high, and offers what seems to be unmatched single-threaded performance. In fact, if we look at performance results of a system packing four of the six core variants of the POWER 8 clocked at 3.52 GHz, and compare it ith a system packing four of Intel's most recently launched Xeon E7-4890 v2 (codenamed Ivy Bridge-EX), IBM's solution compares quite favorably on a per-core basis.

The four-socket Xeon E7-4890 (which packs 60 Ivy Bridge CPU cores clocked at 2.8 GHz) scores 138,900 SAPS (higher is better) while the four-socket POWER 8 (which packs 24 CPU cores clocked at 3.52 GHz) scores 115,870 SAPS. The Intel system offers greater performance, but on a per-core basis the IBM is much more powerful. Also, from a more geeky technical perspective, the IBM CPU is much wider, the chip has significantly more cache, and it offers much higher memory bandwidth than the Intel chip.

Great, IBM's POWER 8 is a beast. So what?
While the performance of the IBM POWER 8 is not at all in question (this is a magnificent piece of engineering), this has never actually been a problem for IBM's POWER line of processors. The POWER 7 was a much beefier and powerful processor relative to its Intel Xeon competition, yet Intel has continued to gain share in the overall server processor market. So what are the important questions investors need to ask about POWER 8?

IBM doesn't have Intel's scale
The POWER 8 is built on IBM's custom 22-nanometer SOI process (finely tuned for high-performance CPUs) using 15 metal layers and weighing in at a hefty 650-square-millimeter die size. Further, note that the volumes of this processor are likely extremely low and, in case you haven't been following IBM's financial statements, the sales of systems using these processors continue to plummet. On top of that, given that this is quite a large, exotic design, yields may still be difficult (but for what machines based on this chip sell for, IBM can afford it). 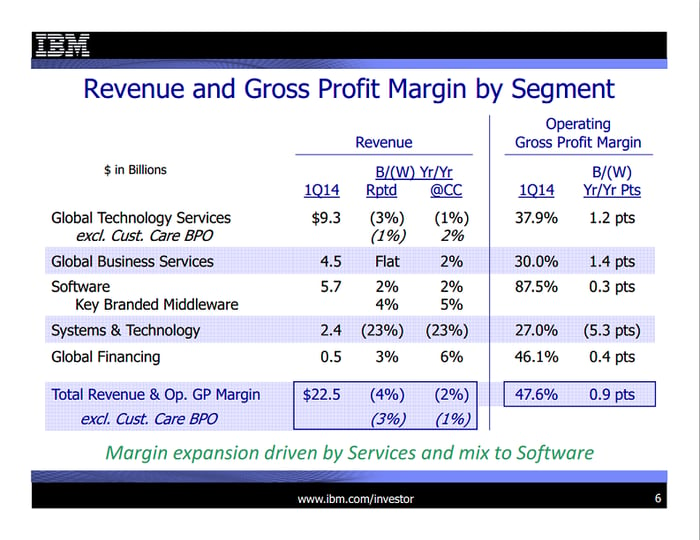 On the other hand, Intel's Xeon E7 (Ivy Bridge-EX) is a 4.31 billion-transistor machine weighing in at 541 square millimeters built on a quite mature 22-nanometer FinFET process in factories that have to date pumped out hundreds of millions of 22-nanometer FinFET processors. While the volumes on this part are low, and while yields on this chip are almost assuredly trickier than a 1.4 billion-transistor Haswell notebook CPU, they are probably better than the IBM POWER 8's at this stage of the game.

In short, even if the performance per watt is better than or equal to Intel's, Intel is likely to be able to offer its product much more cheaply as a result of the massive design leverage, as well as the manufacturing leverage it gets from its PC chip and other segments of its server business.

Foolish bottom line
A big round of applause for IBM's technical teams in executing one of the most interesting and exotic processors on the planet today. While IBM appears to hope for a better future for POWER by opening up the architecture and designs for third-party licensing via its OpenPOWER initiative, the markets that IBM's niche high-end servers that it builds POWER for are still very difficult and not getting any easier.

The key things to watch for:

If neither of these points to renewed signs of life for POWER, then the fate of these technically beautiful POWER processors may be sealed and Intel will have nothing to worry about. If, on the other hand, OpenPOWER gets POWER 8 into more markets, then Intel may indeed have something to worry about.