The Dow Jones Industrial Average (DJINDICES:^DJI) appears all but certain to set a new all-time high at today's closing bell, as it stood comfortably above the 16,600-point level for the first time in its history as of 1:15 p.m. EDT. This would be the Dow's third new record high in less than a month, and its first run of back-to-back record-setting days since the end-of-year trading of 2013.

Surprisingly, this seems to be cold comfort to many investors, who greet every bit of good news with calls for another crash. Is this a fair response? Barry Ritholtz has argued in his regular Bloomberg View column that we should welcome new highs rather than fear them. Bull markets will often rack up hundreds of new record highs before they run out of steam. Bear markets can and have produced new record highs -- even the stagflation that ruined returns from the late '60s to the early '80s saw 27 new nominal record highs for the Dow -- but they rarely hold onto these peaks for long.

Let's examine the nature of these records for a moment before we talk about where we're headed today. The Dow often tried and failed to move past its 1966 peak of 995 points, but a later bull market that petered out in 1973 set a new closing record that held up for a decade: 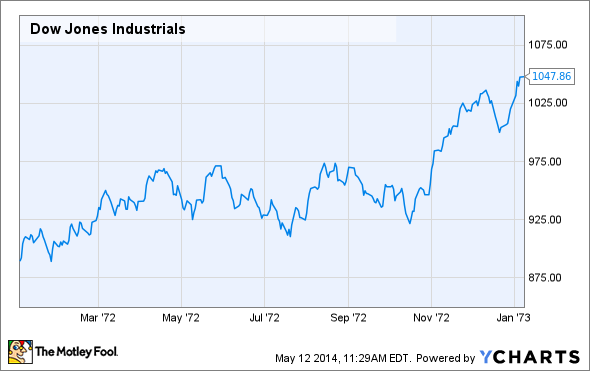 Every single one of the 27 new all-time highs that pushed the Dow's peak past 995 points came during the final two months of this bull market -- only 10 of the bull market's final 37 trading days did not produce a new record.

The Bush-era bull market also produced the lion's share of new records in its final year. Ritholtz records 74 new record highs beyond the dot-com era record of 11,722 points during this period, and the first occurred nearly a year to the day before the bull market peaked in 2007: 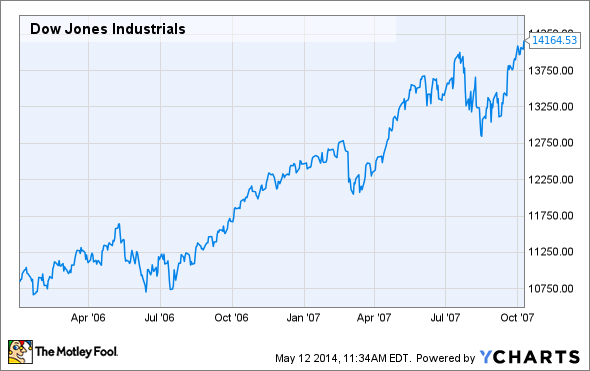 The 2007 market surge looks a little different than 1973's, as it set few records in its final months. The Dow's first close over 14,000 points happened in July, and the Dow only pushed its ceiling higher twice in its final months before topping out exactly five years after its bull market began. 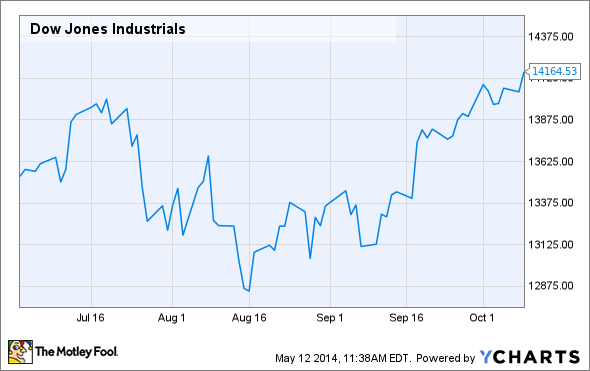 During these final months, many analysts were largely optimistic about the economy, the markets, and the Dow, but a common thread running through much of the commentary centered on just how uncomfortable investors felt about all these records, and how uncertain the future seemed -- at least until the very end, when sentiment appeared to change at the worst possible time:

"The Dow Jones industrial average summited its first fourteener Tuesday before retreating lower. But bullish investors say the index will close above 14,000 soon, despite a housing slump, rising pressures on consumer finances and turmoil in the bond markets. ...

"[Raymond James VP Sacha] Millstone said pessimists still outnumber optimists, leaving a large pool of future buyers to fuel future gains in the market. If everyone were invested in the market and predicting only blue skies, she would be concerned. But that isn't the case. 'Nobody has been optimistic since 2001. But the market is telling you a different story,' Millstone said. 'People should listen to the market.'" -- The Denver Post, July 18, 2007  (one day before the Dow's first actual 14,000-point close)

"'For the first time today, a very good inflation report was issued and it gave investors a reason to be confident,' [Tommy] Williams [of Williams Financial Advisors] said Tuesday. 'If you look at the fundamentals both in the United States and around the world, there's no reason to believe this market run is over.' ... But it's impossible to predict which direction the market will turn in the short term with fluctuating gas prices and the housing market concerns. 'When markets are at an all-time high, people are jittery. People wonder why is it high,' said Williams. 'If any little thing happens, their finger is on the trigger and they bail out.' -- The Shreveport, La., Times, Jul. 18, 2007

"With the Dow Jones industrials closing above 14,000 for the first time Thursday, jittery Wall Street investors are starting to question whether the stock market has the chops to sustain its robust summer rally. But what's really fueling the market's record run is no mystery to local observers. 'Where else are you going to put your money these days?' asked University of West Florida economist Rick Harper." -- The Pensacola News Journal, July 20, 2007

"'When the Fed said it would do all it takes to prevent a financial crisis, the market reaction was: 'What's to worry about? It's all good.' That's pretty much the way we feel,' [Linda Duessel of Federated Investors] said. She added that brokerage firms including Lehman Brothers Holdings, reporting third- quarter results last week, indicated they believe the worst of the credit crunch is over. Financial stocks were among the big gainers." -- The Wall Street Journal, Oct. 2, 2007 (after the Dow's second-to-last record close of the 2002-2007 bull market)

"Investors celebrated the fifth anniversary of the bull market by pushing U.S. stocks to record highs Tuesday amid more evidence the Federal Reserve will cut interest rates further if needed to bolster the economy. ... Another big catalyst: Investors who had played it safe are putting money back to work now that they realize the fallout from the housing crunch and credit crunch is not as bad as they first envisioned, [analyst Joe] Williams [of Commerce Trust] says." -- USA Today, Oct. 10, 2007  (the day after the Dow's final record)

Uncertainty in the face of new records is nothing new, but it's the combination of unbridled optimism and blasé acceptance of the Federal Reserve-as-savior line of thinking that investors should really fear. Many investors seem confident in the Fed's ability to control financial excesses and buoy flagging stock prices this time around, but we've yet to see the sense of relief that accompanied 2007's last records. If anything, most analysts and investors remain cautious, even after 50 new record highs were set in 2013: 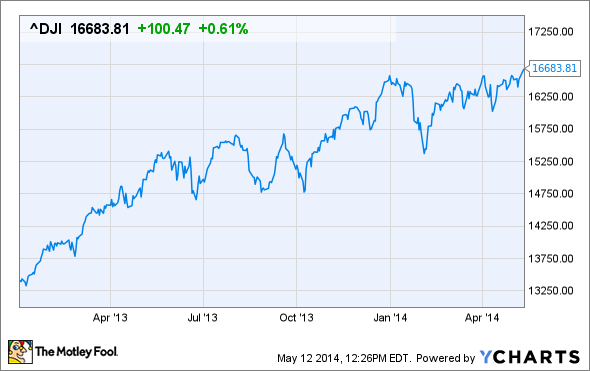 This record surge and tepid reaction closely parallels the Dow's rise in 2007, and even this year's weakness and eventual return to uncharted territory contains echoes of the 2007 bull market: 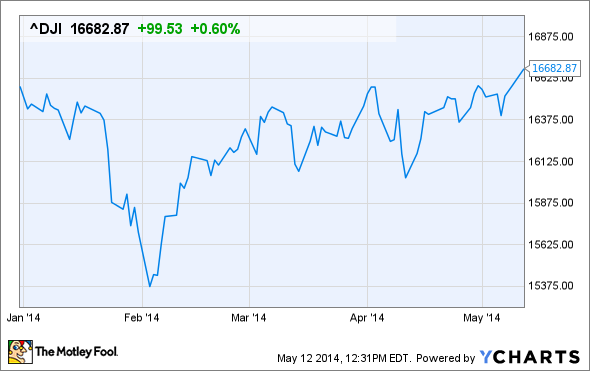 While we're not likely to suffer the same catastrophic meltdown the economy endured in 2008, it's still possible that this "return to normalcy" might herald a long-term decline instead of greater gains. As always, the difference maker will be the American economy -- and as yet, it's shown none of the same signs of turmoil that were already rising to the surface in late 2007. It's easy to be a contrarian when everyone else is skeptical, too. Could you maintain enough emotional distance to know the difference between a sustainable rally and one built on false hopes and hot air?

Is the Dow's Record Run a Sign of Better Times or a Dangerous Top? @themotleyfool #stocks $^DJI Next Article
Current