Dividends are great, but it's important to know where they come from.

Prospect Capital Corporation (NASDAQ:PSEC) reported earnings last week, and problems are brewing. The company is retrenching, pulling back on growth as it works through an SEC inquiry into its accounting methodologies.

Slowing down presents a problem, however. Prospect Capital needs to expand its balance sheet to maintain its net asset value and its current level of net investment income.

How growth impacts Prospect's net asset value
This quarter, Prospect Capital Corporation revealed it had a net asset value of $10.68, a decline of $0.05 per share from the second quarter. Underlying the decline are unrealized and realized losses, and a lack of dividend coverage.

However, there is one bright spot: Prospect Capital sold sell shares above net asset value to help stem the decline. The chart below shows the impact of various items on the company's NAV per share this quarter: 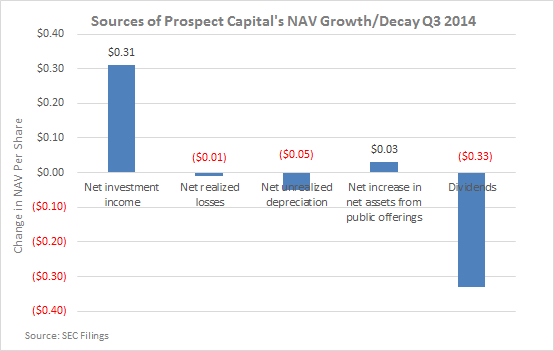 If it weren't for new equity sales, Prospect's NAV would have declined by $0.08 per share.

Similarly, in the last nine months, Prospect Capital has seen its net asset value decline from $10.83 to $10.72 per share. The decline of $0.11 per share would have been much larger if not for accretive stock sales, which added $0.09 per share to its NAV. 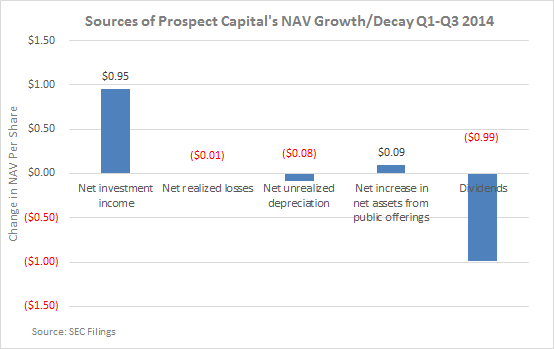 Why it matters
Prospect Capital's growth will slow as it has recently suspended its at-the-market program to sell new shares to the public. Thus, the next quarter will likely show minimal accretion from stock sales, which have played a big role in staving off a declining NAV. (Note that in the first three quarters of fiscal 2014, Prospect Capital's unrealized and realized losses were effectively papered over with accretive stock sales.)

But let's forget about accretive stock sales for just one moment. Instead, we'll turn to another very important factor in Prospect Capital's earnings: Fees.

In the latest quarter, Prospect Capital generated roughly $24.5 million in structuring fees, equal to $0.074 per share outstanding at the end of the first quarter. These fees were earned primarily from the origination of new loans.

We can conservatively remove 20% of that income for management's incentive fee to find that structuring fees are equal to about 20% of the company's net investment income. It's a simple fact that Prospect needs continuous new originations to earn its dividend.

Given Prospect Capital won't be issuing new shares of stock, and management indicated it wouldn't be issuing new debt securities, the only single remaining source of financing is its billion-dollar credit facility. That would provide financing for less than a quarter's worth of originations at the same pace of the third fiscal quarter.

Prospect Capital needs on-going new originations to sustain its high dividends and NAV per share. Without new debt or equity issuance, however, it'll eventually hit a wall where it cannot grow the balance sheet to drive fee income or accretion from stock offerings. That'll be the day that the company has to either make serious adjustments to its portfolio to seek higher yielding securities, cut its debt servicing costs by using its credit facility, and/or lower its dividend to adjust for a lower level of total investment income.

Prospect Capital's dirty little secret is that it needs constant growth to maintain its NAV and net investment income. Growth is constrained for the time being, however, which could put a damper on its earnings going forward.