Please ensure Javascript is enabled for purposes of website accessibility
Log In Help Join The Motley Fool
Free Article Join Over 1 Million Premium Members And Get More In-Depth Stock Guidance and Research
By Casey Kelly-Barton - May 13, 2014 at 12:47PM

The economy could gain more billions if Americans took just one more day of their vacation time each year—but most of us don’t use all our days off.

Summer vacation is just over the horizon, and the travel sector is gearing up for a bigger season than last summer, according to recent data from travel site TripAdvisor (TRIP 5.57%). But travel could do even better, according to the US Travel Association trade group, if more American workers would take a break. A recent Glassdoor survey says that most U.S. employees leave some or all of their vacation days unused—and the USTA says that's costing the economy billions.

It's not that travel is suffering, and a recent TripAdvisor survey of U.S. travelers shows a 6% increase in planned summer leisure travel for this year compared to last year. TripAdvisor's big TripBarometer survey in April revealed that more than 20% of American travelers plan to spend more on getaways this year than they did last year.

That's fortunate, because room rates and air fares are on the rise. More than half the U.S. hoteliers in the TripBarometer survey say they are hiking prices this year, and the Atlanta Journal-Constitution reported this week that domestic summer air fares will be at record highs.

Travel is doing well. But industry experts say that if American workers would take all the time that's coming to them, it could give a big boost to the sector and to the overall economy -- to say nothing of the lift to tired employees' psyches. Glassdoor's survey of U.S. workers revealed that only 25% take all the paid time off they earn. An astonishing 15% said they took none of their vacation days in the previous year. 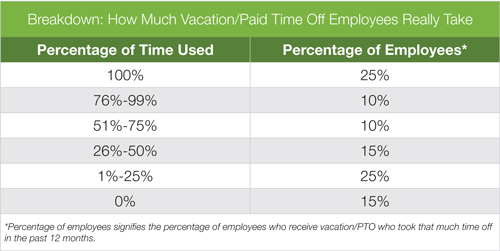 The travel industry sees those unused days as money left on the table. The U.S.T.A. launched Travel Effect this spring to encourage workers to take their vacation days.

"The travel industry would benefit by $30 billion in additional travel spending if employees would take one additional day of earned leave each year," said Cait Douglas, Travel Effect's communications director. "One more day would mean $73 billion in output for the U.S. economy and positive impacts for both employees and businesses."

And if American workers were to take all of their paid days off each year, Douglas said, that would generate $160 billion in overall sales and could support more than a million jobs.

One-third of the Glassdoor survey's respondents said that no one else at their company could do their jobs while they were away; 28% said they were afraid that taking time off would cause them to fall behind on the job.

This makes it sound as if the modern lean workplace is operating a little too close to the bone: Having only one person qualified to cover each set of tasks puts the company at risk of disruptions if a worker gets sick or quits. It also contributes to stress, which can lower company productivity in the long run.

"Some real rest and relaxation will help employees return to work energized, ready to contribute, and make them less susceptible to burnout," said Rusty Rueff, Glassdoor's career and workplace expert. And a stronger economy could help everyone relax a little, even when we're not on vacation.