Mozilla, the maker of the popular web browser Firefox, recently announced that it still plans to follow through on its controversial plan to sell advertisements on "sponsored tabs."

Mozilla's original plan, introduced in February, called for new "Directory Tiles" to be added on a new tab for new users. In the past, these tiles were left blank until they were customized with recommendations based on a user's browsing history. Mozilla planned to sell these tiles to companies as sponsored ads, much to the chagrin of Firefox users.

Firefox VP Jonathan Nightingale recently addressed those concerns in a blog post, acknowledging that many users were concerned that Firefox would become "a mess of logos sold to the highest bidder."

Nightingale clarified that Mozilla only currently planned to add useful Mozilla resources and websites to the new user tab. Nightingale emphasized that the tests were "not about revenue and none will be collected." Yet at the same time, Nightingale confirmed that sponsorship and monetization was still the next stage for the new user tab.

In other words, Firefox plans to sell ad space on its tabs to monetize its user base of over 450 million users, who account for 17% of all web browsers used worldwide.

Mozilla Firefox is currently the third most popular web browser in the world -- Microsoft's (NASDAQ:MSFT) Internet Explorer leads the market with a 58% share, while Google (NASDAQ:GOOG)(NASDAQ:GOOGL) Chrome is only narrowly ahead of Firefox with 18% of the market.

The business of Mozilla
Mozilla is directly descended from Netscape, the maker of the Netscape Navigator and Communicator web browsers. AOL eventually acquired Netscape for $4.2 billion in 1998, and the open source remnants of the browser evolved into Mozilla Firefox, which launched in 2002.

Firefox is owned by Mozilla Foundation, a non-profit organization. Its subsidiary, the privately held Mozilla Corporation, is a for-profit company that coordinates the open source development of the Firefox and SeaMonkey web browsers and the Thunderbird email client. The Foundation acts as a gatekeeper that governs the source code repository. Any profits made by the Mozilla Corporation are invested directly back into the Mozilla project.

Mozilla Corporation is different from many other privately held companies in that it does not have any shareholders or pay stock options to employees. This makes it impossible for any large investor or company to buy a stake in the company or to acquire it.

Mozilla's biggest weakness
Yet if it were possible to acquire Mozilla, it would be a highly lucrative takeover target for Microsoft or Google. 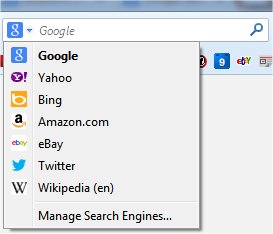 Mozilla (including the Foundation and all of its subsidiaries) generated $311 million in revenue in fiscal 2012 -- a 90% increase from the previous year.

The vast majority of Mozilla's revenue is generated through partnerships in its pull-down search box, which allows the user to seamlessly swap between its search partners Google, Yahoo!, Microsoft Bing, Amazon, eBay, and other services.

However, 90% of its 2012 revenue came from Google -- up from 85% in 2011. Therefore, Mozilla's biggest fear is that Google will stop renewing its search contract, due to a conflict of interest with its own Chrome browser.

That hasn't happened yet -- Mozilla's previous contract with Google expired in November 2011, but it was renewed again until November 2014.

A slippery slope
Looking forward, Mozilla clearly needs to secure new sources of revenue. Unfortunately, each method could be considered a betrayal of Mozilla's principles.

One key example was Mozilla's decision to consider auto-block third-party cookies -- those little pieces of data that identify a user to various sites -- in an upcoming release. Third-party cookies are different from first-party ones, in that they originate from different sites than the ones being visited.

An example of a first-party cookie is an Amazon.com cookie -- it simply remembers a user's username and password for the next time he visits the site. A third-party cookie, however, originates from other sites (such as Google) and can be used to track a user's visits to other sites over longer periods of time.

Mozilla now faces a similar problem with its sponsored tabs controversy. On one hand, selling sponsored tiles in a single tab for new users really isn't a huge deal, especially compared to Google's practice of mining users' search data, browsing histories, and email to create targeted ads. On the other hand, Mozilla's approach is highly visible and could alienate users who start seeing Firefox as an ad-supported browser.

The bottom line
In conclusion, Mozilla is stuck between a rock and a hard place. The company knows that Google doesn't plan to back its efforts forever, yet any obvious steps it takes to monetize its popular browser could be met with a harsh backlash due to its reputation as the open source underdog.

Microsoft and Google, by comparison, don't need to monetize Internet Explorer and Chrome at all -- they are simply gateways and building blocks within larger ecosystems. In that regard, Firefox has the same weakness as its predecessor, Netscape -- it's an isolated piece of stand-alone software, compared to IE and Chrome, which are respectively components of a larger operating system and cloud-based ecosystem.