Please ensure Javascript is enabled for purposes of website accessibility
Log In Help Join The Motley Fool
Free Article
Join Nearly 1 Million Premium Members And Get More In-Depth Stock Guidance and Research
By Leo Sun – May 13, 2014 at 9:41AM

The Winklevoss twins’ Bitcoin ETF could be approved by the SEC by the end of the year. Could this finally be a safe way for everyday investors to buy Bitcoin?

The price of Bitcoin has slumped 33% over the past month, following the meltdown of several major exchanges, an industrywide castigation of the cryptocurrency, and a decision by the IRS to tax Bitcoin as an asset.

All that drama, however, hasn't deterred Bitcoin's most prolific investors, Cameron and Tyler Winklevoss, from pushing forward with a plan to list their Bitcoin exchange-traded fund (ETF) on the NASDAQ exchange. The Winklevoss twins, best known for claiming that Mark Zuckerberg stole their original idea for Facebook (META 1.30%), reportedly owned 1% of the world's Bitcoins last April.

The Winklevoss brothers intend to price 1 million shares of the ETF, the Winklevoss Bitcoin Trust, at approximately one-fifth the price of a Bitcoin ($87 at the time of this writing). The idea was considered a tough sell when it was introduced last July, due to the opaque nature of Bitcoin, security issues, and price volatility. Despite that initial pessimism, Wedbush Securities analyst Gil Luria and other analysts now believe that the ETF could be approved by the end of the year.

This is notably the second time the Winklevoss brothers have tried to boost Bitcoin's legitimacy as an investment. In February, the twins launched Winkdex, a Bitcoin index that averages the weighted price from seven exchanges. 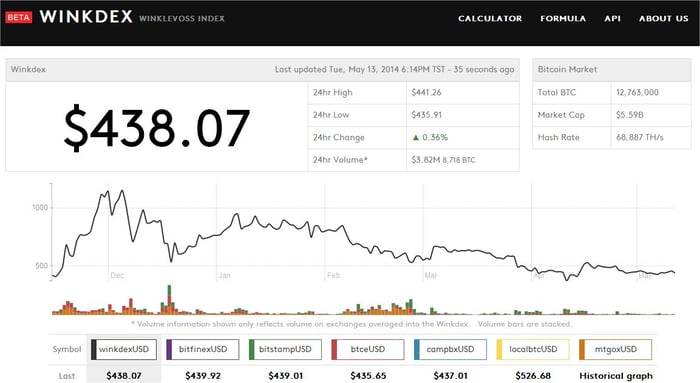 If the SEC approves the Winklevoss Bitcoin Trust, should investors consider it a safer alternative to purchasing Bitcoins on other exchanges?

Better security than current exchanges
The biggest advantage that a Bitcoin ETF would have over current options is security.

If a Bitcoin ETF trades on NASDAQ, investors would no longer need to buy Bitcoins on these shady exchanges. They could simply buy shares of the ETF at any brokerage. There's no way for hackers to "steal" Bitcoin out of the NASDAQ, since it's not a bank -- the ETF is merely priced on the underlying value of the Winklevoss' own Bitcoin assets.

That immediately makes Bitcoin a more secure and appealing investment for mainstream investors.

Turning Bitcoin into digital gold
In an interview with The New York Times, Cameron Winklevoss stated that their goal was to make the ETF "as similar to the gold ETF as possible." Winklevoss was referring to the SPDR Gold Trust ETF (GLD 0.36%), which tracks the price of a tenth of an ounce of gold. Investors can easily understand how a Bitcoin ETF could work by analyzing the SPDR Gold Trust.

The SPDR Gold Trust ETF is backed by 25.9 million ounces of gold, which are held in HSBC's (HSBC -0.32%) vault in London. Investors are issued ETF shares, similar to how a gold standard nation issues gold-backed paper currency.

Ordinary investors can't redeem their shares for physical gold from the trust. Only "authorized participants" such as registered broker-dealers and securities market participants can withdraw or deposit physical gold.

Simply put, investors have to trust that the Gold Trust has enough physical gold to back its shares at all times. Over time, the ETF can slightly lose sync with the price of gold due to currency rates, inflation, and other market factors.

The Winklevoss twins want to replicate this model with Bitcoin, by locking away physical Bitcoins and issuing Bitcoin-backed shares to investors. As long as the Winklevosses store away their Bitcoins in cold storage (offline) instead of in online hot wallets, their ETF would be safe from the hacks that caused Mt. Gox to implode.

A step in the right direction
Many of Bitcoin's supporters claim that the cryptocurrency is the answer to fiat currencies and hyperinflation.

Whereas a fiat currency is only backed by the word of the government, there will always be a finite supply of Bitcoin, with the last of the 21 million possible Bitcoins being mined in 2140. This means that its value would theoretically remain stable across borders, making it an ideal currency for companies struggling with negative currency impacts overseas.

Of course, Bitcoin can't be accepted as an international currency in its current volatile form, since it could lose half of its value within a single year. Meanwhile, its use in illegal online markets such as Silk Road and the collapse of Bitcoin exchanges has cast a dark cloud over the future of the cryptocurrency.

Yet in my opinion, the Winklevoss Bitcoin Trust is an admirable step in the right direction. The ETF could eliminate the need for shady exchanges like Mt. Gox, ease concerns about digital theft, and lead to the stabilization of Bitcoin prices -- making Bitcoin a viable investment and digital currency for everyday investors.