Penn National Gaming (NASDAQ:PENN) spun off its casino properties into a real estate investment trust (REIT) late last year. That was supposed to help the company's growth profile by taking the burden of owning property off if its balance sheet. So far, that hasn't worked out so well—and now Penn has to make rent, too!

The burden of ownership
The problem with owning property is that it costs a lot of money. For the average person, buying a home comes with a 30 year loan from a bank for hundreds of thousands of dollars (or more). Every month you have to pay back principle and interest. And despite owning just a little bit more of your home each month, it's not like you get to benefit from it—your house is an asset that does you no good, financially speaking, until you sell it or take out another loan on it.

That's even more true for a company in a property intensive industry, like gaming. Hotels and casinos are big and expensive. Penn National has four projects on the drawing board that will cost it nearly $580 million dollars to build. At the end of the first quarter, the company had just under $290 million of cash on the balance sheet. It's going to need to take on more debt to get these casinos built.

And while Penn will start to see a return on those investments once they are up and running this year and next, assuming all goes as planned, that debt sits on the balance sheet until it's repaid. That makes it harder to get a loan to build the next property and the one after that. That's why Penn decided to spin off Gaming & Leisure Properties (NASDAQ:GLPI).

Less debt, more rent
Gaming & Leisure took on almost all of Penn's facilities and the associated debt. In return, Penn signed a long-term lease that left it on the hook for property maintenance. The initial lease cost was expected to be $420 million in 2013. Included in this were annual escalators, but not the mandatory maintenance expenses for Penn of 1% of net revenues.

Aside from Penn and Gaming & Leisure being hugely dependent on each other, it sounded like a good deal. But, after Penn National's first quarter results, the first full quarter after the separation, it looks like this partnership is getting off to a rough start: Sighting weather and company specific problems, Penn lowered its full year projections. 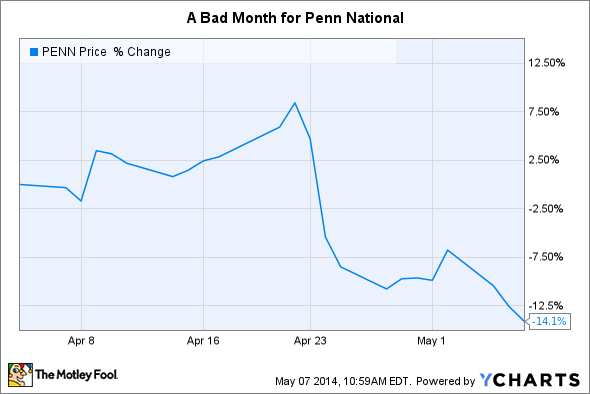 A bad baseline
To be fair to both Penn and Gaming & Leisure, the first quarter is essentially a new baseline for both companies. Pre-spinoff estimates are hard to make because of all the moving parts. However, this is a less than auspicious start. For Penn, a weak gaming market is taking its toll on revenues at exactly the same time that it has a new expense item on its earnings statement.

For Gaming & Leisure, it looks like Penn's actual rent payments are going to fall short of the pre-spinnoff estimate of $420 million. In fact, Penn is now projecting full-year 2014 rent payments of just $418.1 million, down from its previous 2014 expectation of $421.6 million. While it's hard to quibble about a few million dollars, what happens if Penn's gaming business continues to struggle? At this point Gaming & Leisure has nowhere else to turn for revenue.

It's too soon to call this spinoff a bust. But it's clearly not a smashing success right now. It's probably best to stay on the sidelines at Penn National and Gaming & Leisure for the time being.