The main investment thesis for SodaStream International (NASDAQ: SODA) has largely been the potential for getting its do-it-yourself soda machines onto kitchen counters in the U.S. With upward of 20% penetration in places like Sweden but only around 1% here, it wouldn't even have to achieve such dense acceptance domestically to be a runaway hit.

Except somewhere along the way to those starry-eyed valuations that caused believers to swoon, someone removed the punch bowl from the party. Sales at SodaStream that were growing here at triple-digit percentages couldn't maintain that momentum, and quarter after quarter, investors watched the rate at which they climbed diminish until last quarter, when they evaporated altogether, plunging 28% year over year. 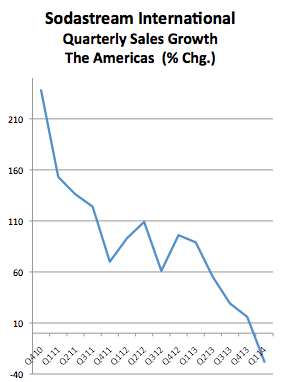 Many said that after the somewhat disastrous fourth-quarter earnings results that were far weaker than anticipated, these equally disappointing follow-up first quarter numbers were pretty much expected. After all, if it can't move its machines in the important Christmas season, there was nothing to suggest it would move more now.

What it really shows is how desperately SodaStream needs to find someone -- anyone! -- to partner with. Where the willingness of Coca-Cola to spend more than $2 billion on a partnership with Keurig Green Mountain to develop a branded at-home cold beverage machine suggests the market is viable and has more potential than what SodaStream can tap, it also means the go-it-alone avenue is no longer a possibility if it's to ever be more than a niche product.

I've long harbored suspicions that, unlike coffee, which is brewed quickly in single servings for convenience, DIY soda is nothing more than a novelty, akin to a sno-cone maker for kids. There's no real cost savings for soda as there arguably is for coffee (depending on where you buy it) and soda itself is already pretty convenient and neatly packaged for in-home use. There may be some health benefits and tangential greenery from not filling landfills with cans and bottles, but not many people are buying a SodaStream machine to save the Earth.

So having saturated its initial target demographic, SodaStream desperately needs a partner to go to the next step. It's a testament to the marketing prowess of the cola giants that the consumer apparently won't embrace the DIY concept unless there's some consistency to the product. You know when you pop a top on a can of Coke that you're getting the same taste time after time; SodaStream instead revels in the variability of its drinks. And Coke's investment notwithstanding, I'm not so sure it is.

Yet the beverage maker also has to contend with the overall decline in soda consumption. Although predicated on a more health-conscious consumer, who is eschewing the artificial additives bottlers inject into their drinks -- a trend that ought to benefit SodaStream's more natural syrups -- sales of soda generally are in decline. We drink 20% less soda today, according to Beverage Digest, than we did in 1998. Last year alone, sales tumbled 3%, and diet soda has fared even worse. SodaStream's flavor sales have also trended down. 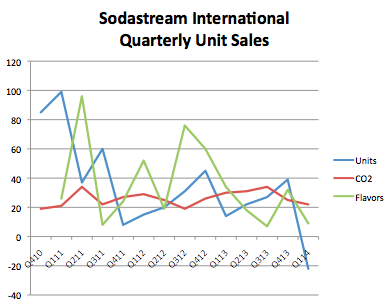 That may explain why SodaStream's unit sales have plunged, tumbling 22% this past quarter even as the rechargeable CO2 cartridge sales were up by a like amount. The air canisters are really the only things that have remained constant -- no doubt as people like the ability to carbonate their water more than anything else.

I've already argued that there are geopolitical reasons why a major beverage company might shy away from being a SodaStream International partner, but if SodaStream wants to save itself from irrelevance, it may have to cut a deal soon regardless. The Coke-Keurig machine isn't due out till next year, giving SodaStream time to salvage the opportunity, though I'm not sure I'd be willing to bet on a partnership being sufficiently substantial to turn the tide and make sales effervescent once again.